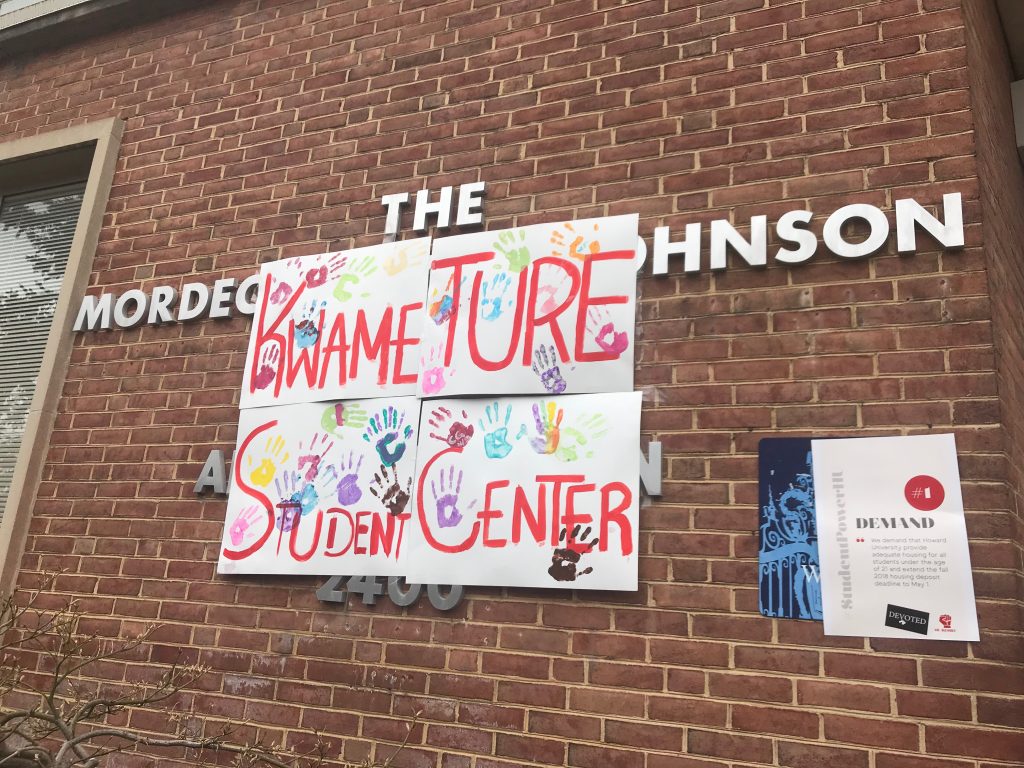 Where there were once long financial aid lines, the aroma of coffee drifting from the ground floor and spacious offices for the university’s top administration, student protesters continue to stand in defiance of administrators for the eighth straight day of occupation. They have effectively renamed the Mordecai Wyatt Johnson Administration Building the  “Kwame Ture Student Center,” thanks to a large-scale banner covering the space’s official name.

Currently, close to 300 students fill the building. They take shifts serving food, organizing the food pantry, guarding the entrance and keeping the space clean and open for first aid needs and medics. Floors are categorized by quiet, femme only, and an open space for LGBTQ identifiers, ensuring that no one is excluded by gender. 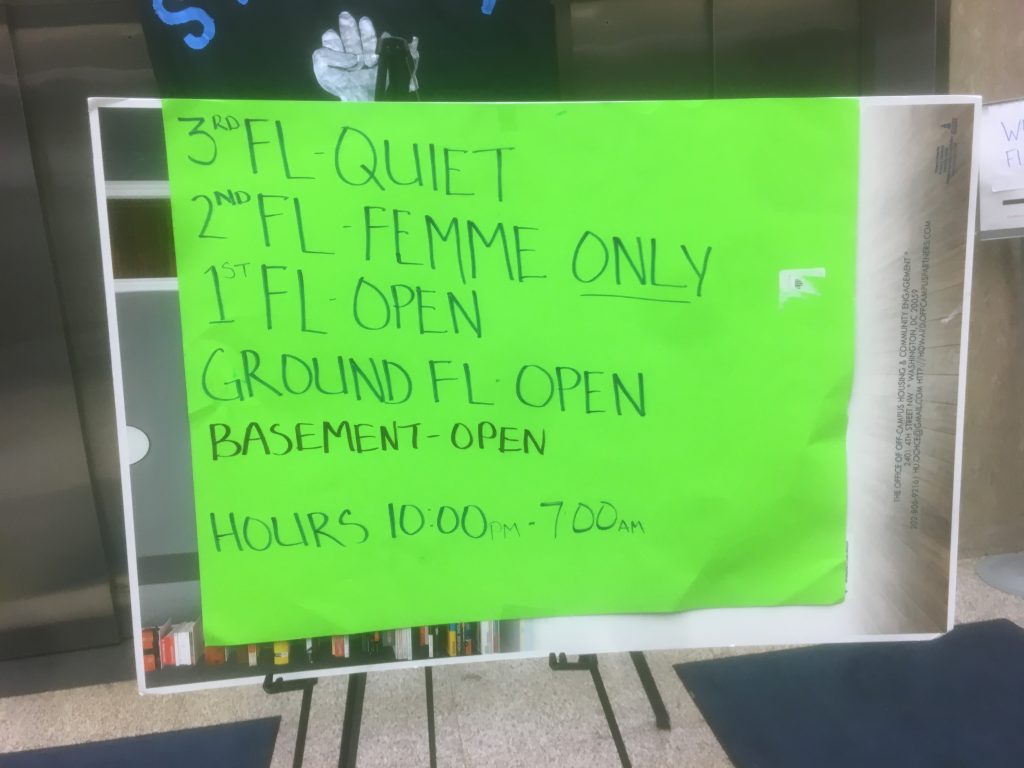 Categories for each floor in the Administration building. (Photo/ Nancy Vu, The Hilltop)

Many protesters say the occupation has created the first safe space they’ve experienced at Howard University, a testament to the depth of their frustration and the goal of their fight. For them, it goes beyond a list of demands. For them, the very  future of Howard University is at stake.

“I am doing it honestly for the students who can’t even be here,” said Deanna Esan sophomore, biology major from Laurel, Maryland. “The fact of the matter is, there are students that are going to class sick, tired, hungry, depressed and can’t keep up with any of the sociopolitical economic causes at Howard. To be able to be here for those people is an honor and a blessing.”

Her words carry echoes of the past. In 1968, more than 1,000 students staged a demonstration in the Administration building for four days, leaving only after their demands were met. In 1989, more than 2,000 students seized the building, carrying with them their own list of demands.

Their bigger mission of occupying the space for the long haul— until all of their eight remaining demands are met. Student organizers and protesters, alongside the 57th Administration of Howard University’s Student Government Association, have been negotiating with the Board of Trustees since March 30. 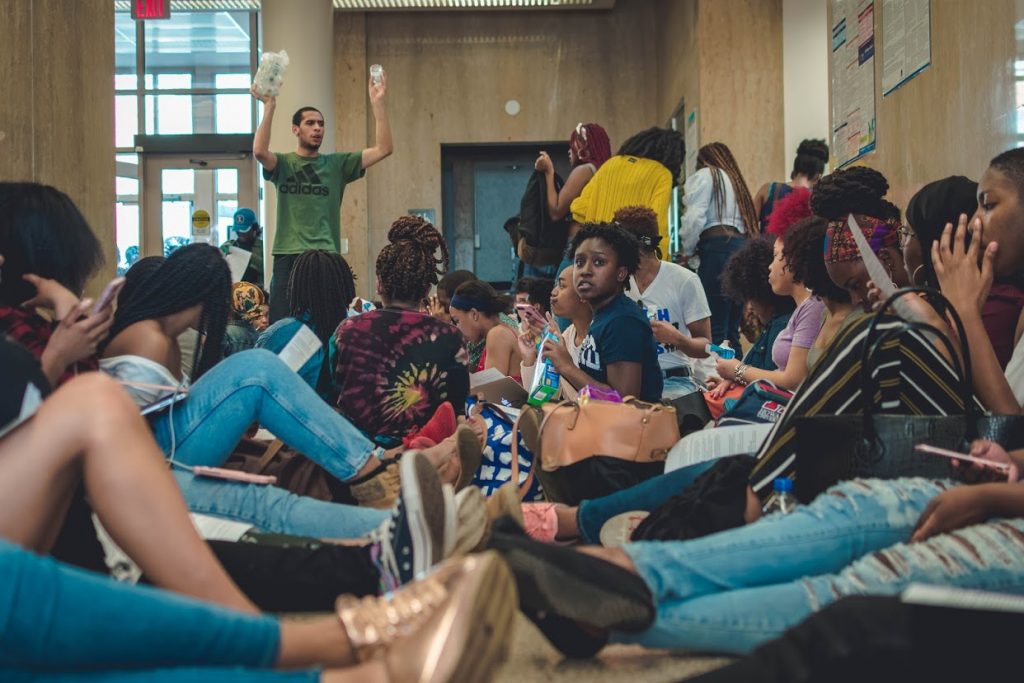 Students gathered inside the Administration building for #StudentPowerHU sit-in that began on March 29. (Photo/Feranami Quadri, The Hilltop)

Student organizers said that one demand—adequate housing for students—has been met, and that they have reached “somewhat of an agreement” on seven others. Remaining demands include a tuition freeze, progress on handling of sexual assault cases and other issues. But perhaps the biggest remaining stumbling blocks are demands for the resignation of Howard University President Frederick and the entire Board of Trustees.

“They’re non-negotiable,” said Imani K. Bryant of HU Resist. “We believe that in order to change this university institutionally and systematically, there needs to be increased student power, and the president needs to resign because he has done things that are detrimental to the function of this university.”

Bryant said the students understand the need to be flexible. “When we came in here, we knew that there would have to be some compromises made on some of our demands,” he said. “The Trustees have been receptive to most of our demands, and we have made compromises.”

As students continue to stand resolute in their call for the resignations, which would entail the appointment of a new president as well as a new Board, many are finding strength by looking to the past that hopefully, with the changes they make in transparency, student influence and administrative affairs, it’ll prevent the need for another occupation of the Administration building.

“I think a lot of the reason that we were empowered to protest now is because that we saw that it did work in the past,” said Alexis Grady, sophomore political science major from Philadelphia, PA.

“For it to be working again, for us to be getting some of the demands met, or even any change that we see, I think it will show students that activism works, and that it’s important to be on the ground, and it’s important to make your voice heard,”

In the days following the takeover on March 29, members of the Howard University community have aligned either with students of HU Resist and those occupying the administration building or in support of President Frederick and the Board of Trustees. Division and friction continue, though the parties involved (see list below) maintain they “bleed blue” and remain dedicated to “truth and service,” both references to the university’s motto and history.

In Support of Students

In Support of President Frederick and The Board of Trustees