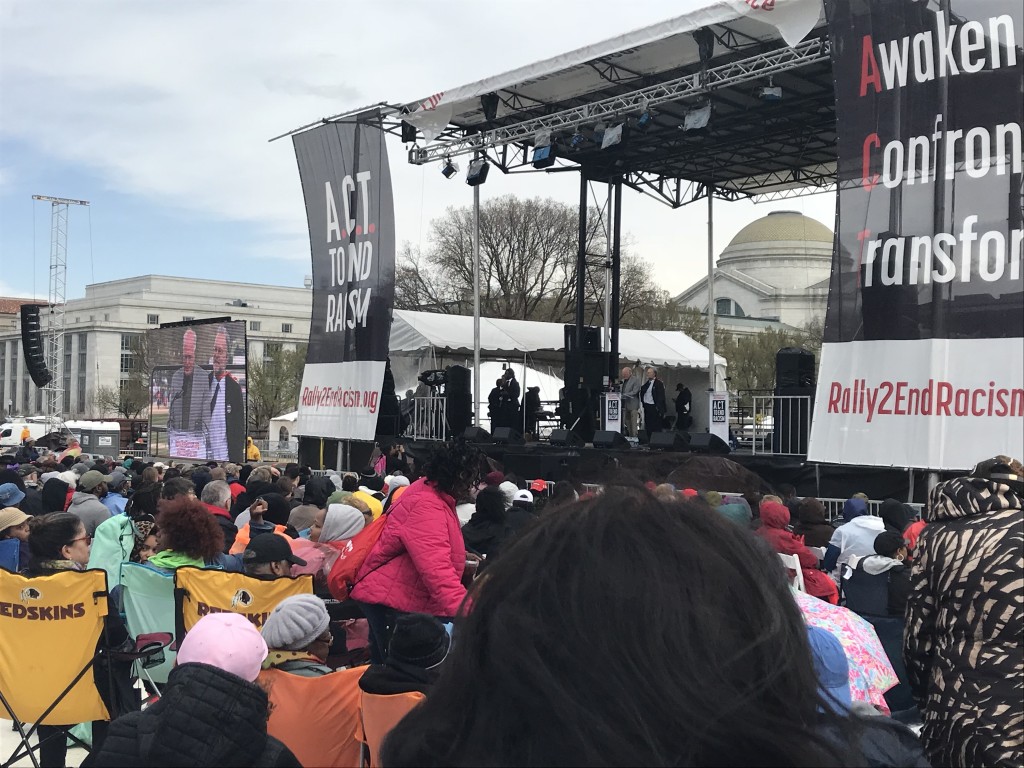 Awaken, Confront, Transform sponsors Ben Cohen and Jerry Greenfield were among the speakers who appeared at the rally.

Hundreds of people gathered Wednesday morning at the National Mall in the nation’s capital to commemorate the 50th anniversary of the death of civil rights leader Martin Luther King Jr. It was one of scores of similar ceremonies held in King’s honor across the nation.

The National Council of Churches of Christ in the USA organized the “A.C.T. To End Racism” movement that will span three days, April 3 to April 5.

A.C.T., which stands for Awaken, Confront, Transform, has been holding a series of events including prayer services, the rally and legislative workshops.

Beginning at 7 a.m., religious leaders, activists, celebrities and more walked in silence and solidarity through fierce winds from the King monument to the National Mall. At 7 a.m., marchers treaded with their signs and crosses up the sandy trail of Independence avenue, to rally for an end to racism.

King, who spearheaded the activism that led to voting rights and desegregation of public accommodations, was assassinated April 4, 1968 in Memphis, Tennessee.  King was often the pivotal figure in the decades long Civil Rights Movement, which stretched from King’s desegregation of public buses in Montgomery, Alabama, to shortly after his death. 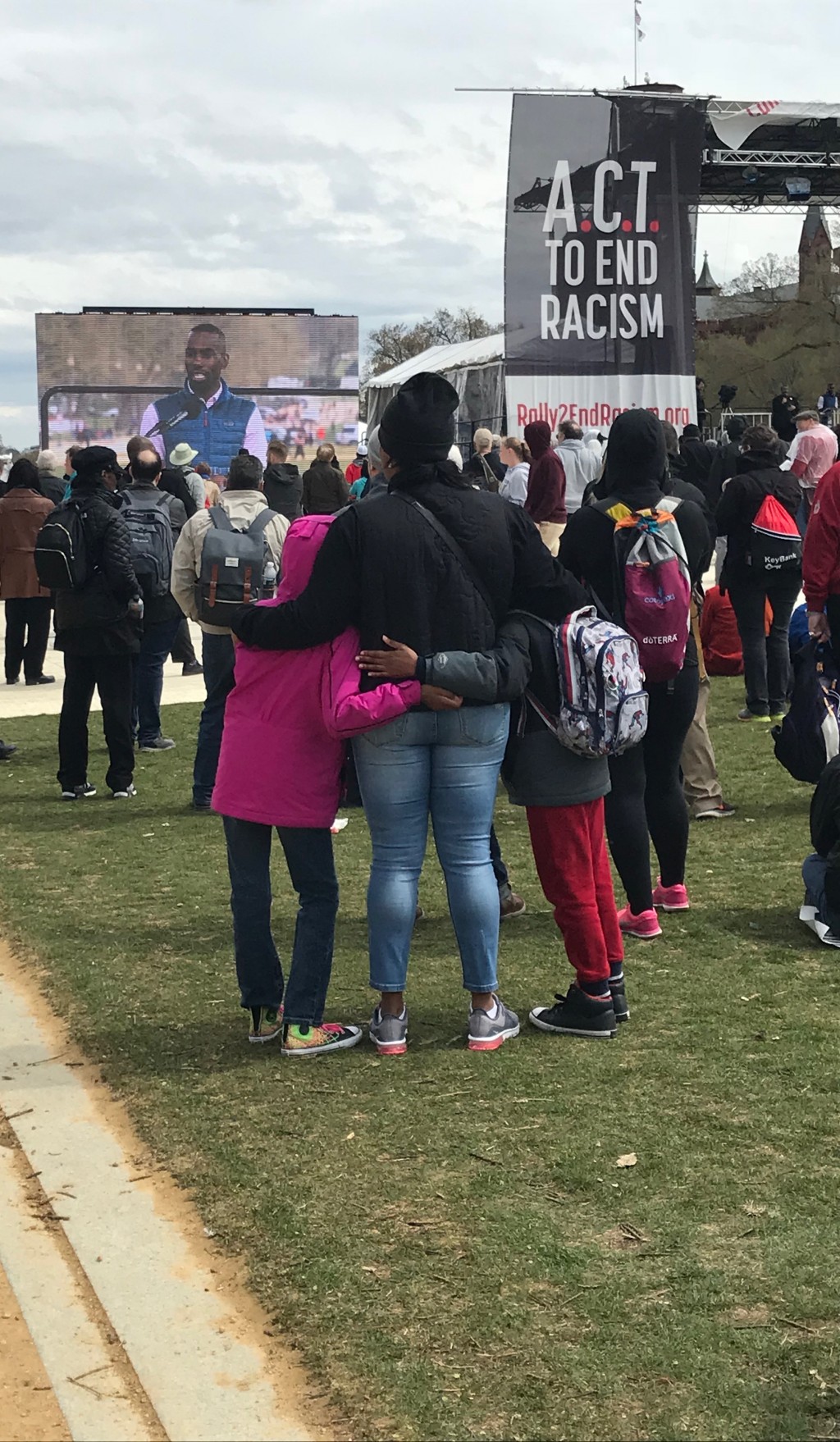 Deray McKesson delivered a hopeful speech for those who attended the rally.

The A.C.T. movement mission statement is closely aligned with Dr. King’s ideologies as a Christian and even honors him in its very premise.

The statement says, “We will commit to do our part to eradicate the entrenched racism that grips the United States and paralyzes our ability to see every human being as equal.

We challenge ourselves and our communities to join in truth-telling, leading to actions that right the wrongs, and, with God’s grace, bring healing and wholeness to all people, and unity to the nation.”

Two of the speakers at the rally were Ben Cohen and Jerry Greenfield, the co-founders of Ben & Jerry’s Ice Cream.

“The point is that there are millions of black and brown people that have been screwed by the system of white privilege,” Greenfield said.

It was a diverse rally, with many different religions,  ethnicities and races represented among the participants. Some even traveled from far across the country to be in D.C. for the event.

Michele Virrnig and Sue D’Alessio traveled over 18 hours from Wisconsin to attend the rally. The two took a bus to D.C. with 130 other members of the United Methodist Council of Churches of Wisconsin to be at the forefront of the movement.

Virrnig shared her sentiments on racism in America today.

“I just think it’s time,” she said, “Enough is enough. Just like with gun control and lobbying. They need to realize that racism is structural–it’s built into the system. I’m shocked it’s still happening.”

D’Alessio said she began protesting for equality with her father when she was 14 and living in Milwaukee, Wisconsin. She experienced the racism first hand.

“I didn’t realize how bad it was until my pastor advocated for racial inclusion in our congregation and our church then lost 400 families,” she said. “I knew that the problem was way bigger than me.”

Since then, D’Alessio said she has been using her privilege as a white woman to make a difference for minorities when she can.

“I’ve become much more aware,” she said. “Now I know when to step aside and make someone visible when the world won’t look at them.” 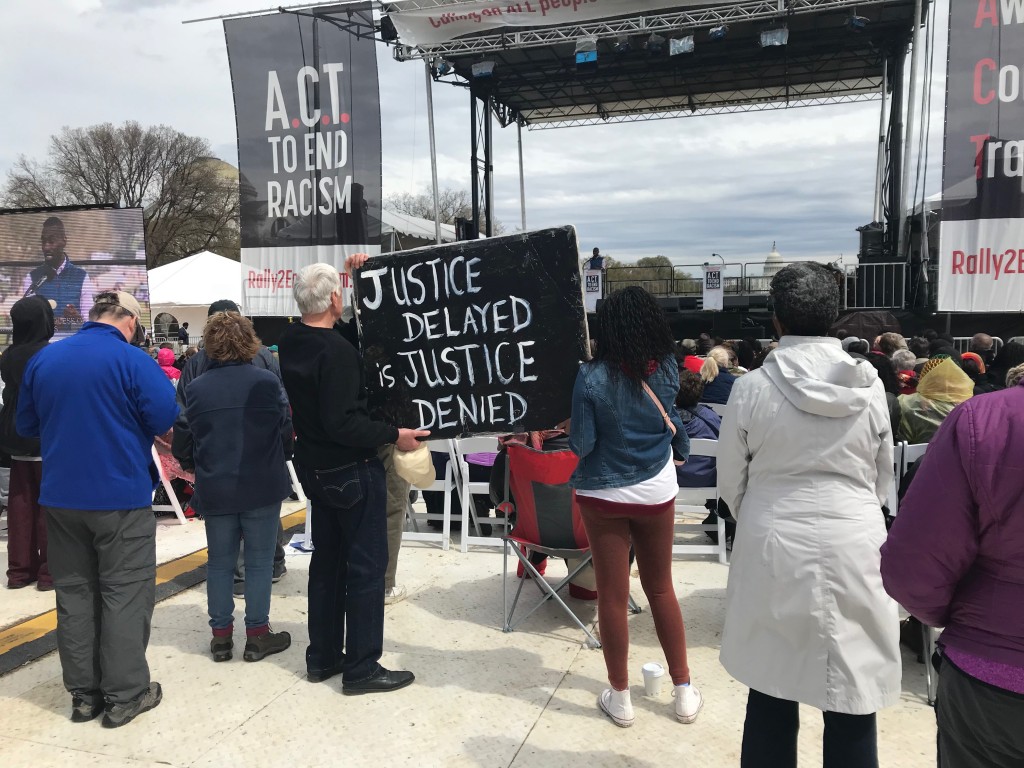 After many marched for an end to racism, rally-goers gathered for a series of speakers, including celebrities at the National Mall.

Actor Daniel Glover and gospel singers Yolanda Adams and Marvin Sapp were among the celebrities who traveled to Washington to participate in the march.

Following the 2014 shooting of unarmed, Michael Brown, many protests arose in Ferguson, Missouri, the surrounding weeks. Among these protests was an enthusiastic supporter of the Black Lives Matter movement, activist and writer, DeRay Mckesson. Mckesson was present as one of the speakers at the rally. He spoke about representation and white privilege.

“There’s no reason why Band-Aids look like white skin, that is power,” McKesson said. “Why is nude not the color of my skin? That is power.”

Mckesson delivered a message about equality and coexistence along with new age activism and his thoughts on it.

April McDavid, 31, a Prince George’s County, Maryland, school teacher, stumbled across the rally on an early morning trip to D.C. to celebrate her birthday.  She was glad she did.

“I’m just glad to see all these colors [of people] here,” she said, “and it’s good to see everyone finally supporting our cause.”