Hundreds of thousands marched in the nation’s capital and across the world to commemorate those killed by gun violence and to demand more effective gun control legislation.

The march, entitled March for Our Lives, was led by teenagers and survivors of the mass shooting at Marjory Stoneman Douglas High School in Parkland, Florida.

To honor the 17 victims of the February shooting, one of the speakers read their names, “Alyssa Alhadeff, Scott Beigel, Nicholas Dworet, Jaime Guttenberg . . .” He saved the name of one student, Nicholas Dworet, for last because Saturday would have been his 18th birthday. 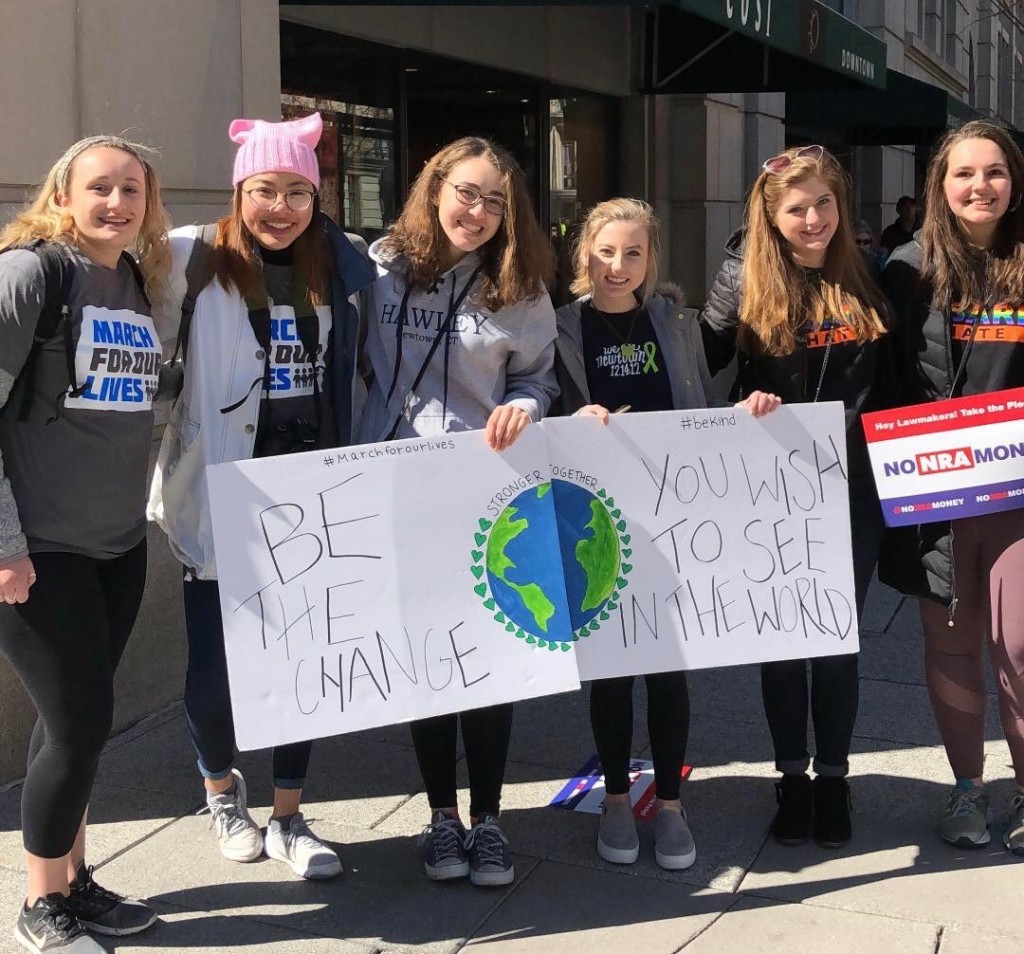 Brianna Richardson (far left) stands with her friends from Connecticut
who all traveled to Washington to support March for Our Lives.

People from across the nation traveled to Washington in support of the cause. One of them was Brianna Richardson, who came from Newtown, Conn., the site of the deadliest public school shooting in America. In 2012, Adam Lanza fatally shot 20 children between six and seven years old, as well as six adult staff members at Sandy Hook Elementary School.

Richardson, whose father is the president of Sandy Hook Volunteer Fire Department, said the incident inspired her to become a nurse.

“I want to help people live happy healthy lives, so that one day we don’t have people who feel so sadly that they have to do these things,” she said. After the tragedy, Richardson, began volunteering and pushing for change, as well.

Students and survivors of the Parkland shooting joined with students across the nation and celebrities to share their testimonies on the main stage. There was also a six-minute moment of silence for the time it took to kill the 17 victims at Marjory Stoneman Douglas High School.

One of the speakers on the main stage was the granddaughter of Civil Rights icon Rev. Martin Luther King Jr.

“I have a dream that enough is enough and that this should be a gun free world, period,” 9-year-old Yolanda Renee King said.

The crowd at the march was very emotional and many were teary-eyed at the remarks made by the speakers. 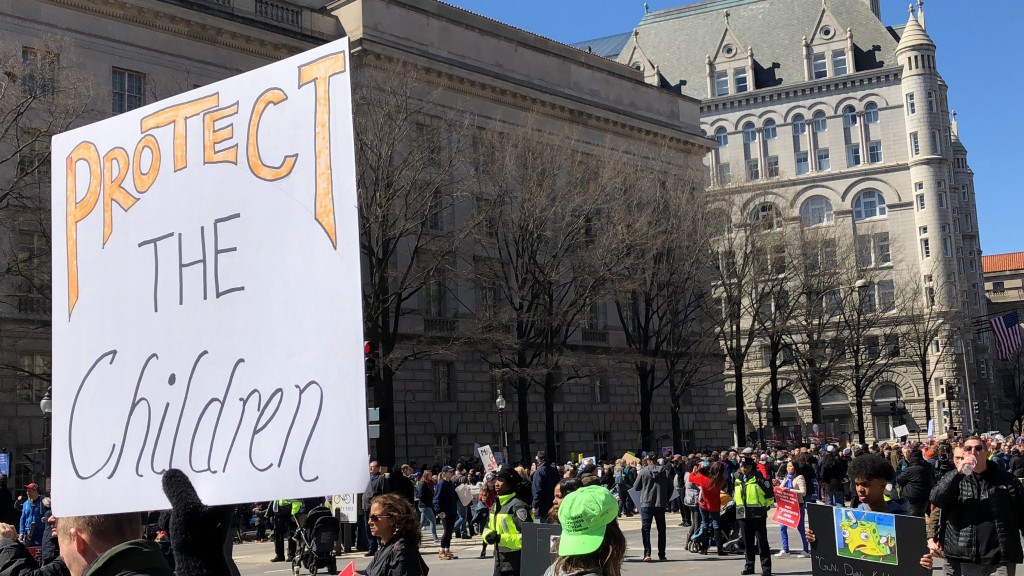 “Protect the Children,” one sign reads, paying homage to the victims of the school
shootings, many of whom were children.

Amber Kelly, a teen mother, stood in the crowd with her son and expressed the worry she has for her son attending school.

“I’m more so scared for my son than myself,” Kelly said.  “I don’t have the money to send my child to private school or homeschool him. How can I feel comfortable sending my son to school if I know there’s a possibility he could be shot?”

Helena Ristic, 24, is originally from Serbia.  She said she decided to join the march to support the young people leading the event and to help end gun violence.

“I think this event shows that even though they’re kids, they can still make change,” Ristic said. “We all want gun violence to end.”

Lots of children were there with their parents.  Many held signs and walked alongside their families.

Zachary Hill, 8, walked with his mom and two siblings and was excited he could be a part of this movement. 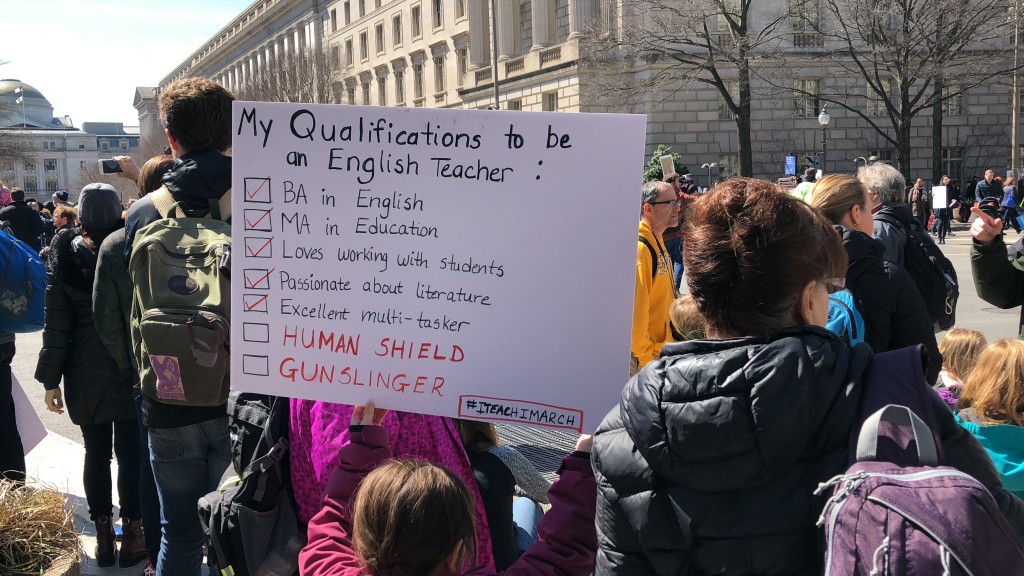 One young girl holds a sign which reads “My Qualifications to be an English Teacher.”
“Human shield” and “Gunslinger” are not checked off on the list.

Aalayah Eastmond, a survivor of the Marjory Stoneman Douglas shooting, urged people not to lose focus on the fact that most gun violence happens in black and Latino neighborhoods.

“It doesn’t only happen in schools,” Eastmond said.  “It’s been happening in urban communities forever.”

Naomi Wadler, 11, also took to the main stage with a similar message, ensuring that people of color are not left out of the conversation.

“For far too long, these black girls and women have been just numbers,” said Wadler, a fifth grader who organized a walkout at her elementary school in Alexandria, Va., earlier this month.

“I urge everyone here and everyone who hears my voice to join me in telling the stories that aren’t told, to honor the girls, the women of color who are murdered at disproportionate rates in this nation.”.

“People aren’t taking this seriously,” Douglas said. “The second amendment was meant to protect your property and yourself.  You don’t need an AK-47 or an SK to protect yourself.  A simple handgun can do that.”

Douglas named two of the types of assault rifles protestors want banned.   Supporters of gun control are also pushing for the ban of Bump stocks, an accessory that allows semi-automatic weapons to fire much more rapidly. 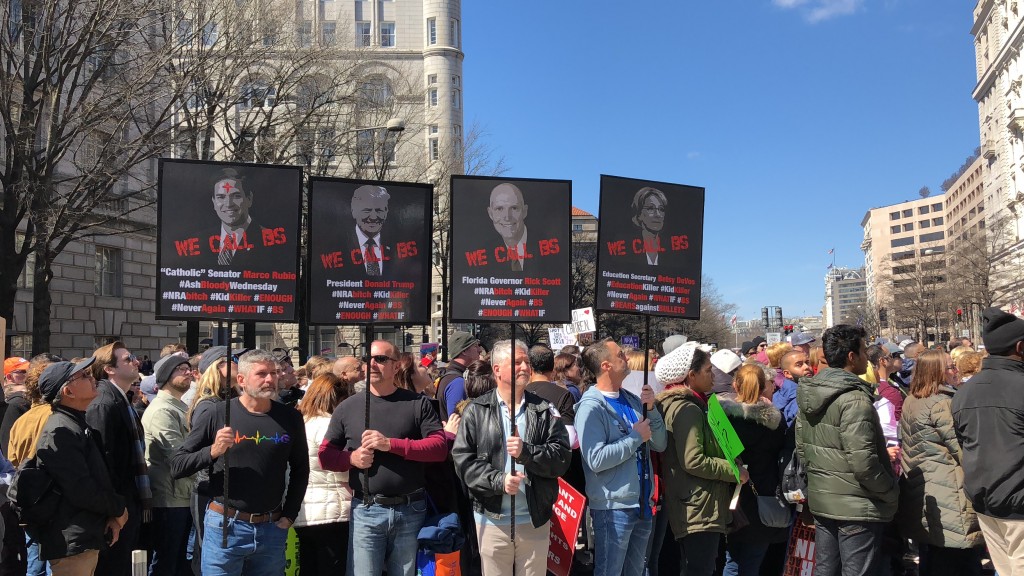 “We call BS” was another popular chant and the topic of the signs held by the
participants above.

Leaders of the march insisted that the event was a call to action, so volunteers lined the streets to register people to vote so they can elect government officials who will support stronger gun control and remove those who do not.

“Vote them out,” an activist pleaded to the crowd.