Following the celebratory festivities honoring Howard University’s 151st year, students are disgruntled and in an uproar regarding housing for the 2018-2019 school year. Students on campus are deeming it as a crisis, taking to Twitter with their concerns with the hashtag: #HowardHousingCrisis.

However, the university has reassured students and the Howard University community otherwise. According to an email sent by Vice President of Student Affairs, Kenneth Holmes, the university is experiencing unforeseen glitches in the new system Starez that is being used for housing reservations. Holmes apologized and further reassured students that “Howard University has enough on-campus housing capacity to accommodate students’ needs.”

Holmes also stated that “students who have paid their housing deposit through the RSVP process will be accommodated housing on campus for the 2018 academic year.

“For those who have not yet been notified of their housing assignment, you will hear from ResLife no later than Friday, March 30.”

Students on the other hand are not convinced. As students issues with housing continue, the student body is expressing their grievances with the perceived negligence of the university that includes: the lack of transparency, timely announcements and acknowledgement from administration of students’ needs.

In an email sent to President Wayne A.I. Frederick by sophomore, computer science major, Kendal Hall concerning the matter, President Frederick responded with “Your tone and tenor is inappropriate. The appropriate offices to handle this matter are copied and will respond.” 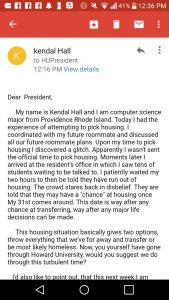 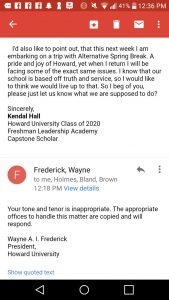 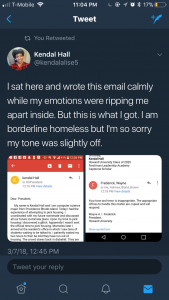 The conversation between Hal and Frederick was shared via Twitter, circulating with over 8,000 retweets and 17,000 likes. Her experiences shared amongst other Howard students, continues to cause an uproar among the student body, and poses a challenge to create a sense of unity to bring about reform with Howard’s management of student affairs.

Students met in In the auditorium room of Locke Hall on March 7 discussing their plans to stage a protest in front of the Administration building. This precedes the 50th Howard University A-Building takeover that took place in March of 1968. 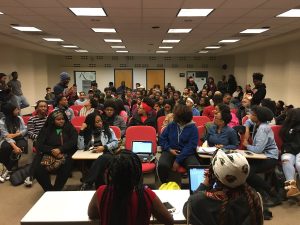 Through these efforts, students are showing that they will continue to be relentless until their voices have been heard and their needs have been met.

In this article:Howard Housing Crisis, reslife