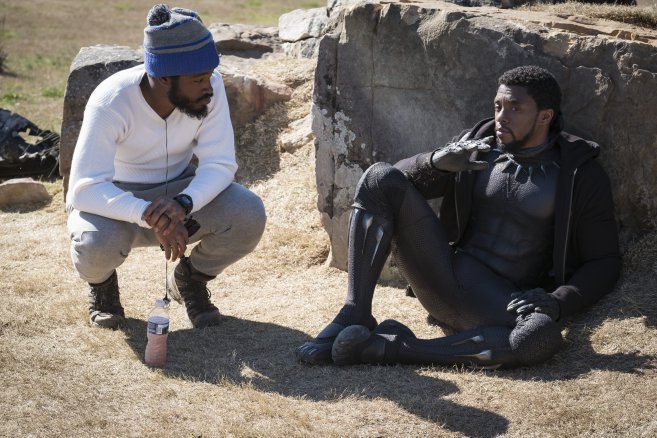 Director Ryan Coogler speaks to Chadwick Boseman, who plays the Black Panther behind the scenes. Photo by Marvel Entertainment

Black Panther director, Ryan Coogler shared how creating the film helped him to discover aspects of his identity that he was previously unaware of.

Coogler was part of a panel discussion this past Sunday at a special screening of the movie at the Smithsonian National Air and Space Museum IMAX theater.

“I remember having the conversation about being black. I wanted to belong to something and find my identity. I wanted something to be proud of. This film is about finding the African side. We are all African,” Coogler said.

Currently in America the issue of race and the conversation surrounding identity has been ongoing. Coogler explored his identity while creating Black Panther, a movie that is enriched with African and African-American culture.

A still from the movie with cast members from left Lupita Nyong’o,

The panel discussion with was moderated by journalist and author Ta-Nehisi Coates also included costume designer Ruth Carter and producer Nate Moore. Collectively, the film creators explained what Black Panther represents culturally for Africans and African-Americans. From the wardrobe to the context of issues within the movie, the creators focused on developing a product easily relatable to the audience. The costumes worn in the movie also provided inspiration into African culture.

“I was inspired by Afropunk. I pulled influence from several African tribes and made sure to stay true to each tribe,” Carter said.

Black Panther examines the identity of Africans and African-Americans from various perspectives.

“Hollywood underestimates what the audience wants. We need to make movies like this, movies that tell good stories,” Moore said.

Before the panel conversation, an audience gathered for the advanced screening.

The theater was filled with excitement as the early viewers waited to see the movie that doesn’t premiere worldwide until Friday. When Black Panther started the theater grew silent and all eyes were pierced to the screen. Throughout the movie, the audience applaud, cheered and laughed. Without giving too many details away, many of the early viewers believed the movie was amazing and definitely a must-see.

“Black Panther is everything I expected and more. This is the best movie I’ve seen in forever. I will definitely see it again and again “ Senait Weaver, a Howard University biology student said.

Experience #BlackPanther for yourself in theaters this Friday