The corridors that connect the different halls of the Harriet Tubman Quadrangle are notorious for greeting visitors with an unwelcoming smell. This scent is just one of the many unlivable conditions that residents of the Quad have been subjected to.

“I legitimately feel like I’m in prison or a halfway house,” says freshman nursing major NaKayla Bruno when describing her experience living in Quad.

She’s not wrong— with overcrowded, small spaces, failing infrastructure, rodents running rampant, mold growing in the showers and unidentifiable substances in the water fountains, living in Quad deeply resembles living in a penitentiary. The only difference is students are paying between $4,270 and $8,388 each academic year depending on their unit size. 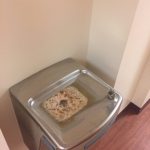 An unknown substance grows in the water fountains.

The Office of Residence Life and the Office of Maintenance and Housekeeping are the two departments in charge of making sure students’ housing needs are met and taken care of. Both departments serve to upkeep the building and maintain a sanitary environment for the students to live in. However, the conditions the students are currently living in show that these two departments have failed to meet their goals and the students’ expectations. When students try to voice their grievances to the Office of Residence Life or Maintenance, their demands often go ignored for long periods of time. This is due to various factors, such as lack of manpower and resources.

Freshman clinical laboratory science major Maya Owens has caught five dead mice in her room within a matter of eight days. Owens states that maintenance prolonged the issue for over a month and attempted to cover it up with temporary solutions such as glue, sugar and snapping traps. This only resulted in more dead mice being caught. 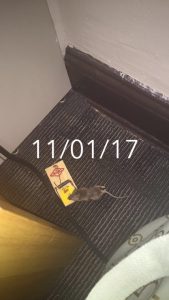 According to Owens, maintenance was able to locate the immediate problem: the mice were eating through the insulation of the heating and cooling units.

“It’s thoroughly annoying. Residents pay to live here so the standards should match up,” Owens says, “Maintenance needs to be more on top of things and work in a faster, more thorough manner.” 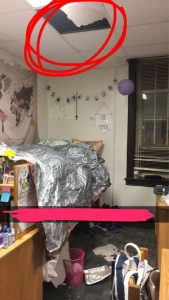 Freshman environmental studies major Audre’ana Ellis had a similar dilemma with maintenance’s inability to fix immediate issues when her ceiling collapsed into her room due to leaky pipes. Like Owens, she was forced to reside in a bed that was not her own until the issue was resolved.

“This happened last year, a former resident assistant said, but no one fixed the problem so it happened to me,” Ellis said. “A lot of contaminated water came down and got my stuff wet when the ceiling tile fell through. Maintenance realized that the tiles in the bathroom were not sealed correctly, so they sealed them. That’s why water was leaking down when people were taking showers.”

Freshman Coby McElrath reported unidentifiable substances in the water fountain and could only get the attention of maintenance after tweeting a picture of the fountain.

“A lot of girls on my floor and our RA called maintenance multiple times and they didn’t come to fix it until days after we tweeted the picture,” said McElrath.

Ironically, the public entities that the residents use to cleanse themselves are not the cleanest facilities to use. Both freshman history major Allyssa Mack and freshman business major Lyneè Phillips highlight the lack of toiletries in the bathroom, and the abundance of mold in the showers.

“There’s never any working soap machines, now everyone on the floor is sick,” said Mack.

“On our floor, in the bathrooms, we have black mold on the ceiling that has spread to above nearly every shower. So when you look up that’s all you see,” says Phillips. 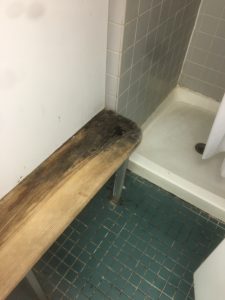 The showers in the dorm are infested with mold

The residents who are constantly facing the hazardous and unsanitary issues are under the impression that ResLife and Maintenance are not interested or concerned for the wellbeing of students.

“I feel as if they don’t really care because if they did, things would be handled in a much more timely manner rather than them waiting until it’s convenient for them to come fix things,” says McElrath.

However, there are a number of factors contributing to the lack of timeliness and efficiency at which these problems are fixed. One maintenance employee believes that one crucial factor is lack of manpower. They emphasize that the staff numbers dwindle on the weekends with around 10 people reporting for work in both the ResLife and Maintenance departments.

“We have the whole university that we’re responsible for and we’re understaffed,” says the employee.

“Lack of communication means [we] don’t relay the stuff fast enough, so I guess once they do that then we [can] get things done right,” said the employee.

Another issue that both employees emphasize is the lack of resources and a larger allocation of resources toward their respective departments.

“Say something breaks, and you need a part to fix it. It’s not just a matter of twisting a bulb or taking a screwdriver,” says one of the employees. “You actually need the part and you can’t fix it without the part. Sometimes getting the part is an issue.” 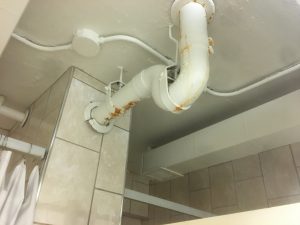 The issue is clear. With a combination of factors that lack staff, communication and resources it’s no wonder maintenance is unable to do their job in a timely and efficient manner. As a result, the students have to suffer through the repercussions of the university’s lack of attentiveness to the issue.

“We really just want our grievances addressed in a timely fashion,” said Bruno. “We talk to our administration over and over again in an orderly fashion about our wants, but no one wants to listen until we get all loud and ghetto. We just feel like we pay so much money to live here, but we aren’t seeing the money get put to use. The Quad is definitely not a $4,500 lifestyle.”

What do students have to do in order to get the administration’s attention? Do students have to protest and yell in unison to get what their money’s worth? The only question that still stands is how the university plans on handling the hazardous living conditions of the Harriet Tubman Quadrangle.