The Congressional Black Caucus held their 47th Annual Legislative Conference Sept. 20-25— five days of events dedicated to issues currently affecting the black community worldwide. On the conference’s third day, there was a panel discussion about hip-hop’s impact on the United States of America’s economy and how the culture contributed to the increase of wealth among African-Americans. Hosted by Rep. Maxine Waters (D-Calif), the discussion opened with a conversation between Combs Enterprises employees Dia Simms, Andre Harrell, Derek Ferguson and Jerry Tweedy. This was followed by an interview with Sean ‘Diddy’ Combs, who provided tips for those interested in following his footsteps.

Upon entering, Diddy gave a dedication to his alma mater, Howard University, by shouting to the audience, “HU… YOU KNOW!” Rep. Waters and Diddy began their discussion with a review of his early history. Diddy told the audience that when he was younger, he dreamt big and studied the greats. Then, he touched on the importance of attending Howard. He knew he wanted to be in the music industry, so he sought to understand the business side of the industry at the Mecca.

“Going to Howard, it changed my life… I got the chance to get an internship with Andre Harrell,” said Diddy. This internship was Diddy’s official introduction to the music business and ultimately changed his life. He went on to explain that because he was so dedicated and passionate about the internship, his professors and peers at Howard supported him. “They didn’t think I was crazy. If I was anywhere else, I wouldn’t have gotten that support,” he explained. 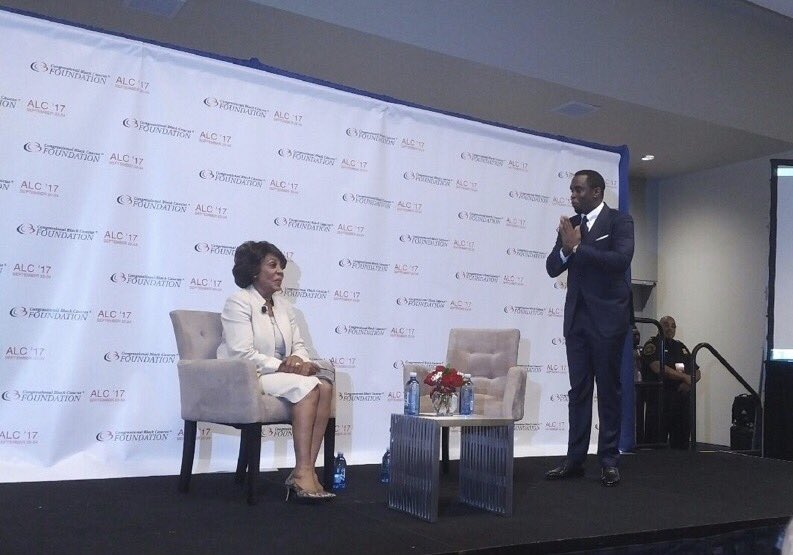 “When did you realize your talent?” Rep. Waters asked. Diddy shared that he dreamt of being a professional football player but soon realized that wasn’t his calling. As the conversation proceeded, Diddy talked more about his music career.

“I believed in the power of hip-hop,” said Diddy, clarifying that, although he’s one of the richest in the culture, it wasn’t about the money for him as much as it was about creating opportunities. Diddy later discussed his television network, REVOLT TV.

“My biggest venture is in media because we don’t have a voice,” said Diddy. Although the network is a big accomplishment, he mentions that it is also troubling to say that he is one of the largest black network owners. “I just feel like we haven’t gone far enough, but I also feel that we have the power and the voice,” he continued. Diddy commented on the largest obstacle he had to face. “The business answer is time and money. The real answer is racism.”

Toward the end of their conversation, Rep. Waters asked the icon, “Do you think if people tap into their uniqueness, it can turn into business?” Diddy did not think so.“No. For us to really be a successful businessman or businesswoman, it’s a lot of sacrifice and hard work,” urged Diddy.

As one of the most successful and influential people in the music industry and beyond, Sean Combs lived up to his accomplishments by providing attendees of the Annual Legislative Conference with lessons they could take with them to the top in their respective fields of business.

In this article:Culture, d.c., washington