What song lyric comes to mind when Howard’s Homecoming is mentioned? Maybe it’s “Ain’t no telling where I may be/May see me in D.C. at Howard Homecoming” from Notorious B.I.G.’s “Kick in the Door.” Or maybe it’s Ludacris’s “Pimpin’ All Over The World” where he says, “Then jump in the car and just ride for hours/Makin’ sure I don’t miss the homecoming at Howard/Hawaii to D.C. it’s plenty women to see.” Regardless, these exemplify the black culture apex that is Howard University’s Homecoming.

So why do some Howard students and alumni feel discontent with homecoming this year? Alexis Young (@LexLanez), a junior public relations major from Los Angeles, commented, “My concerns mostly stem from execution. The fashion show and Yardfest are student favorites and some of the hardest events to plan plus it takes manpower and people who know what they’re doing. I’m open minded, but skeptical.”

Young worked as a visual and audio volunteer for Blueprint, the theme for Howard’s 2016 homecoming, and added, “as for the announcement, I think it was rushed. From the theme to the graphics. It’s not terrible, but [it’s] definitely not to the standard as to when the students did it.”

This year’s homecoming reveal began on Wednesday, Sept. 13th at approximately 9 p.m. when @HowardU tweeted: “The wait is almost over. #HowardHomecoming is Oct 15-22nd.  Stay tuned for a sneak peak of the events lineup 2nite @ 9:30pm.” Thirty-seven minutes later, @HowardU announced that the theme and the full calendar of events would be live the following day on September 14th. Just five minutes prior to that tweet, Howard teased the HU Twitter scene with an announcement of some of the events that would occur. On Sept. 14th, the theme was revealed with a 6 second clip: NOW.

The 2016 Howard Homecoming student-run steering committee—with interest meetings that started as early as October 2015—promoted Homecoming much differently.  Their twitter page @BisonHomecoming released a 13-second promo previewing the theme on March 22, 2016 with the caption, “Recognizing the Past, Celebrating the Present, Embracing the Future #SaveTheDate #HUHomecoming16.” On July 16, 2016, the theme was released with a 25-second video on Twitter with the hashtag #ExperienceBlueprint. About two months later, @BisonHomecoming revealed their steering committee with flyers containing photos, names, and titles of the students. On Sept. 21, the full promo video was released. The following day, a more risqué video was used to advertise the fashion show: Untitled to United. The step show, entitled RENEGADE, had a 49-second promo video that dropped on September 30th.  All promo videos are still up on the @BisonHomecoming Twitter page. 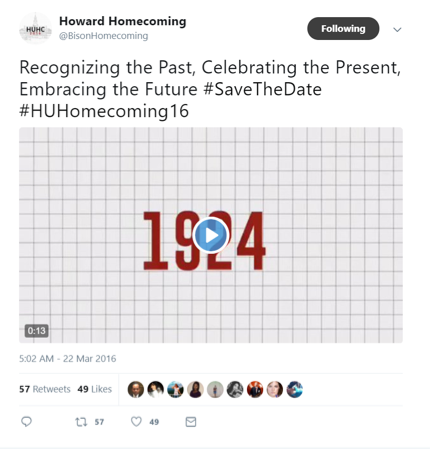 The dates serve as a comparison of advertising tactics between last year and this year.  This year’s late announcement has left some students concerned about the direction of homecoming. Alumnus Khalil Roberts (@sirrkhalil), public relations major and graphic design minor from Connecticut shared his perspective as a previous volunteer and event coordinator, “I think the theme was rushed and last minute. I don’t feel that it is creative at all and it doesn’t compare to previous years. I think they could’ve done better with the announcements. Howard University Homecoming is a brand itself. As students, we pride ourselves on using tactics in order to get everyone excited. They lacked that.”

He also added, “Not having a student ran committee affects my perception of the theme being that you can tell the adults lack branding and the creative process … I think the association will pull together decent performers, but I am hoping it is performers that students want to see, which is the importance of a student steering committee … I hope that the association realizes they need students to steer Homecoming. We are great on branding and the creative aspect.”

Alumna Kiera “KB” Thomas (@KBsteezy) from PG County, Maryland with a degree in strategic communications said, “I mean, to be honest, the theme doesn’t matter. It’s all about what we follow through with the fashion show, appearances and performances.”

Howard has less than a month to hype the students and alumni for NOW. Where will the non-student run committee go from here?

In this article:#HUHomecoming17, campus, howard university