Senior legal communications major Victoria Gray is currently serving as the 2016-2017 Miss Howard University. Before becoming Miss Howard, Gray was 2015-2016 Miss School of Communications as well as a Student Ambassador, Campus Pal and HUSA Senator. She is also a member of the Golden Key Honors Society and National Society of Leadership and Success. Recently, Gray has joined Ebony Magazine’s HBCU Campus Queen competition where HBCU queens from across the country campaign for votes in order to win the title of a HBCU Campus Queen. The winning Campus Queens spend a weekend together for a photoshoot feature in an Ebony spread and have the opportunity to meet Ebony editorial staff. We sat down for a quick Q&A about her goals as Miss Howard and as an HBCU Campus Queen hopeful:

The Hilltop: Why did you want to become Miss Howard?

Miss Howard U: I wanted to become Miss Howard because Miss Howard was the first person I noticed when I got to campus. I really looked up to her and I hope to one day reach the same level of grace as Tamekia-Terin Taylor.

The Hilltop: What is your platform as Miss Howard?

Miss Howard U: Empire, which is in honor of Howard alumna, Taraji P Henson. Empire means empowering The Mecca to promote intelligence, while yet, representing excellence which inspires each to student to excel in both the classroom and in the community.

The Hilltop: What have you done so for to strive towards the goal of your platform?

Miss Howard U: I’ve held events around the community, mentored at local D.C. schools and I’ve also just tried to implement my platform everyday when I interact with people.

The Hilltop: What do you enjoy most about being Miss Howard? 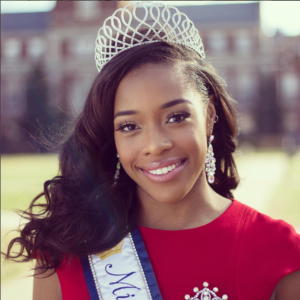 Miss Howard U: Having the opportunity to showcase my university, I’m very proud to be a Bison and I love showcasing my pride in our school.

The Hilltop: What have you learned so far from being Miss Howard?

Miss Howard U: I have learned a lot that’s helped me grow as a person, mostly improvisation and how to think on my feet as well as how to focus on the positive at all times.

The Hilltop: What can we look forward to as far as events this semester?

Miss Howard U: I hope to have a second Women’s Tea which will be open to all women on-campus because the last one was just for freshmen. I also have a passion for hair and makeup and use them as personal tools of relaxation and I want to hold an event to give Howard women tips for makeup in casual and professional settings.

The Hilltop: What comes along with EBONY’s HBCU Campus Queen Title?

Miss Howard U: Of course bragging rights and just another chance to show off Howard. The contest is mainly about which HBCU can uplift and elevate their queen which I would really appreciate from my fellow Bison.

The Hilltop: What is your current place in the contest?

Miss Howard U: The last time they updated us was three weeks ago and at that point I was in the top 20, but I have to be in the top 10 to be featured in EBONY.

The Hilltop: If you were to become an HBCU Campus Queen, would you add any new priorities to your reign? If so, what would they be?

Miss Howard U: I would encourage all students to pick up the issue featuring Howard which will either be the February or March issue and to continue to support EBONY and other Black publications and businesses.

The Hilltop: When will the results be announced?

Miss Howard U: Voting ends January 15 and winners will be announced January 30.

You can vote for Victoria Gray by visiting on the HBCU Campus Queen tab on EBONY Magazine’s website here or the link in her social media bios (Instagram & Twitter: @MissHowardU). You can vote three times within a 24 hour period, so be sure to get Miss Howard into the top 10! 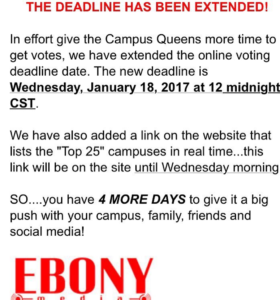