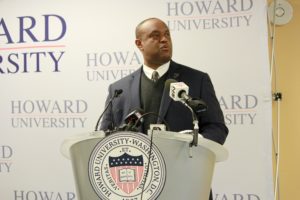 “I can tell the guys that are here, the players, that we are here to win championships,” London said. “We’re here to win on the field, to win off the field and we’re going to win in the community. The old days and old ways are now the new days and the new ways.”

Prior to his remarks, Frederick expressed confidence in London to take charge of the Howard Bison as he said that college athletics is a competitive activity that requires excellence on the field, but it also requires student-athletes to make sure that they excel in the classroom.

“Today, while we are here to talk about the future of the Howard University football program, I hope it’s clear to all involved that this is an investment in the athletics programs as well,” said Frederick. “The Board of Trustees and I believe that Mr. London brings outstanding leadership, experience and is sure to be a tremendous resource to the entire Howard community.” 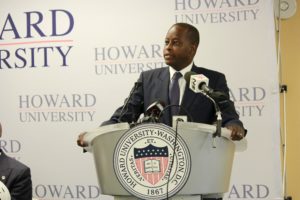 Davis said that when searching for a new head football coach, Howard wanted someone to be a leader of men.

“We wanted the idea of a CEO of our football program…someone whose integrity and character was beyond approachable. Someone who can take 18-year-old young men that we have come into this institution, nurture them and be a part of their success…not only on the field, not only in the classroom, but also in life,” said Davis.

In his remarks, London spent the majority of his time at the podium facing the Howard Bison football players and addressing what he expects to implement during his tenure.

“The first standard is to go to class because it’s in your best interest to become an educated man,” said London. “The second is to show class…to show class how you handle success, because we will have success, and how you handle adversity, as life is full of adversity. The last is to treat people with dignity and respect.” 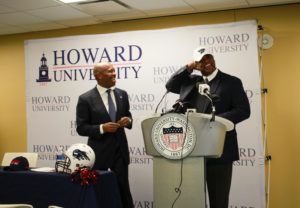 After hearing London’s remarks, sophomore wide-receiver Evan Brooks, a broadcast journalism major, said that he believes London is a great hire for Howard and looks forward to working with him in the upcoming season.

“He’s going to hold us to a high standard off the field and make sure that we’re not just good players on the field, but also become well-trained, young men that can raise families on our own to go out into the world and make a difference,” said Brooks. 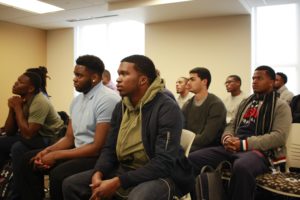 As the new head football coach, all eyes will be on London as he will work to change up the entire football program, as the team struggled last season with a 2-9 record.

“It’s an honor and a privilege to be standing here before you as the next head football coach of Howard University,” said London. “This is an opportunity to increase my family, to embrace another fan-base, to develop other young men that aspire to be doctors, lawyers, wherever you want to be because I stand here before you saying you can be whatever you want to be, whether it’s on the field or off the field.”

To watch the full press conference, click on the link below: