About 70 people came to Founders Library’s Browsing Room to listen to organizers from both #BlackLivesMatter and #RhodesMustFall discuss the importance of Black Activism in the United States and South Africa on Tuesday, Nov. 29.

The panel discussion featured Dr. Melina Adullah, a professor of Pan-African Studies at California State University, Los Angeles and organizer with #BlackLivesMatter, as well as Kealeboga Ramaru, an organizer with #RhodesMustFall in Cape Town, South Africa who works in equal education, who both discussed activism within Black communities in their respective countries. Nana Afia Y. Brantuo, a Howard University alumna who holds a B.A. in African Studies, moderated the event.

“There’s nothing more important than succeeding in the liberation of our people,” said Abdullah. “We can’t expect the institutions that we’re trying to tackle to support us in our liberations.”

Throughout the discussion, both panelists described in detail the respective work that they worked and participated in through #BlackLivesMatter and #RhodesMustFall.

Ramaru was a student of the University of Cape Town who helped with the organization of the #RhodesMustFall movement, which later led to the #FeesMustFall movement. The #RhodesMustFall campaign is described as, “A collective movement of students and staff members mobilizing for direct action against the reality of institutional racism at the University of Cape Town.”

#FeesMustFall became a student-led protest that started because of the increase in fees at South African universities that followed the Rhodes Must Fall protests. Ramaru spoke about the institutional racism that went on at the University of Cape Town.

“I think the idea of decolonization is a big and daunting one. It doesn’t only challenge the structures around you, it also challenges you as an individual,” said Ramaru.

Abdullah, also a Howard alumna who earned her B.A. in African-American Studies and is the current chair of the Pan-African studies department in CSULA, spoke about the liberation of Black people. Abdullah also helped with organizing the #BlackLivesMatter movement in June 2013 after the Trayvon Martin case.

Those in the audience expressed that the panel discussion was both enlightening and informative.

“This event was very informational and pretty essential to what’s going on in life,” said Zubair Vernon, Howard University senior. “The integrity of the women was pretty impressive. It was good to see them [Ramaru and Abdullah] in that type of light in their warrior form.”

“I looked at this event more as a professional development rather than an educational event,” said Clarice Jackson, a Howard University graduating senior. “The speakers were distinguished, but represented two parts of life that gave you a comprehensive view.”

Dr. Msia Clark, an assistant professor in Howard University’s Department of African Studies, organized the event with the help of her class to make it a success. 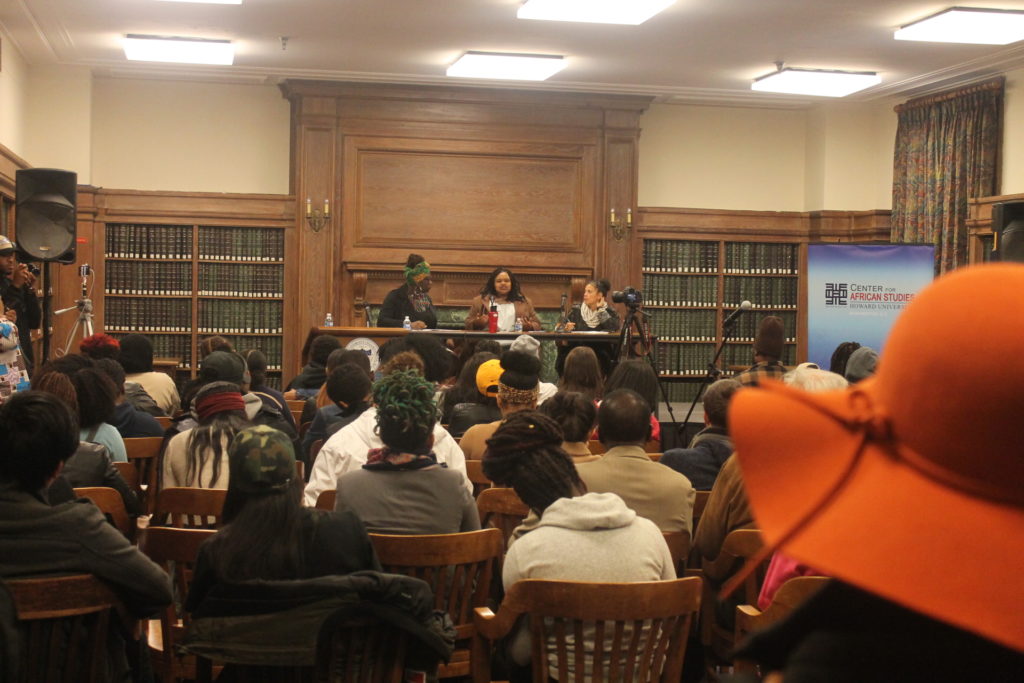