Editor’s Note (For Clarification): Cameron Clarke served as an assistant news editor for The Hilltop during Spring 2016. He has been as a contributing columnist since Summer 2016.

Cameron Clarke, a senior biology and health education double major at Howard University from Richmond, Virginia, has been selected as one of 32 students to become a 2017 Rhodes Scholar. Only 32 students (two from each of the 16 United States districts) were chosen from over 850 applicants.

Clarke is the fourth Howard student to be awarded with the Rhodes Scholarship, preceded by Marianna Ofosu in 2003, Carla Peterman in 1999, and Mark Alleyne in 1987.

“Having the chance to represent this school abroad as a Rhodes Scholar is amazing,” Clarke said. “Now that it’s real, and that I’m actually going, I feel like I have a legacy to uphold. So it’s a special weight on my shoulders.”

Malcolm Clarke, a 2016 Howard alumnus who majored in computer science and Cameron’s brother, expressed that his family was very proud upon hearing the announcement, but not surprised.

“Cameron has always excelled academically, and so, to me, this is just him moving to the next phase of education achievement,” said Malcolm. “I also think that Howard was instrumental in his journey towards the Rhodes Scholarship. I can’t wait to see where he goes next.” 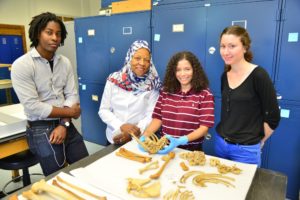 According to Howard University’s Office of University Communications, Clarke has participated in faculty-led research at Bahir-Dar University in Ethiopia through a Howard-National Science Foundation grant, studied at Columbia University’s School of Public Health, and has conducted research at the National Institutes of Health as an Amgen Scholar. Clarke has also worked as an assistant researcher at Howard University’s W. Montague Cobb Research Laboratory, in which he helped to create a database between the laboratory and the New York City African Burial Ground. Currently, Clarke works as an intern in the U.S. House Committee on Science, Space, and Technology, conducting science policy research for members and staff.

Congratulating Clarke on his achievement, Howard President Wayne A.I. Frederick said, “We are extremely proud of Mr. Clarke’s accomplishment. Mr. Clarke’s academic pursuits will lead to solutions in the broader society that are needed ever more so today. Cameron is the epitome of Howard University’s gift of solutions to the world.”

“It honestly still has not fully sunk in yet,” said Clarke. “I have not been outside of the country for more than a month, and now all of a sudden, I am going to be living at Oxford for two years.”

After graduating from Howard next summer, he will undergo a two-year program at the University of Oxford, seeking a master’s degree in primary health care. Ultimately, Clarke plans to head to medical school to work in public health policy and doing clinical research.

According to The Rhodes Trust, the British charity that runs the program, Rhodes Scholars “are chosen not only for their outstanding scholarly achievements, but for their character, commitment to others and to the common good, and for their potential for leadership in whatever domains their careers may lead.”

The Rhodes Scholarship was named after Cecil J. Rhodes, a British businessman, mining magnate and former Prime Minister of the Cape Colony, and is designed to provide a post-graduate education for its recipients at Oxford University in England.