In partnership with BET Vote 2016, The Changing the Climate College Tour set out to encourage young, African-American voters to get involved in the political process, Thursday, October 20. The event was hosted by the Howard University Student Association in the Blackburn Digital Auditorium.

As this year’s presidential election is more divisive with high-stakes and unpredictability than any in recent history, the involvement of this demographic is crucial to shaping the future of this country. Changing the Climate hopes to make young, Black voters active and powerful for not only this upcoming election, but for the continuance of contemporary politics.

The initiative tours 10 cities, visiting schools from Howard to Harvard, as a nonpartisan panel of journalists, entertainers, activists and politicos. The panel visiting Howard was composed of influencers including Tamika Mallory of Mallory Consulting, MSNBC contributor Kwame Jackson, Love & Hip Hop’s Yandi Smith, and Telly Madina of The Madina Group.

While topics ranging from education to criminal justice reform were discussed, there was a particular focus on climate change and environmental injustice. With modern events disproportionately affecting the Black community like the BP oil spill, the Flint, Michigan water crisis, the coal power plant placement in Chicago, Illinois and the immense flooding in Baton Rouge, Louisiana, Changing the Climate argues that environmental issues should be at the forefront of the black community’s political consciousness. 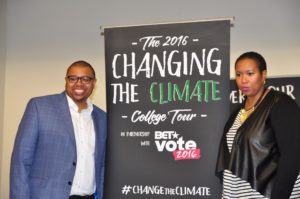 This initiative was launched by Howard alumni and power couple, Quentin James and Stefanie Brown James, who are the founders of Vestige Strategies, a civic and community engagement firm based in Washington, D.C.

The panel tour’s main objective was to create a sense of hope by highlighting the clear and present danger in today’s political scheme and motivating black millennials to change the climate.