October 15, 2016, marks the 50th anniversary of the Black Panther Party for Self-Defense. Co-founded by Bobby Seale and Huey P. Newton in Oakland, California, this revolutionary organization is considered to be one of the first organizations in United States history to militantly struggle for ethnic minority and working class emancipation.

As a current student at Howard University and serving this year as the editor of its student newspaper, The Hilltop, I feel that it is our duty and responsibility to highlight and report this Black history 50 years later as a Black Press publication.

I have to be honest and express shame that my beloved Howard University has not publicly recognized this momentous occasion, as many Howard University alumni, including ancestors Amiri Baraka (c/o ‘54) and Kwame Ture (c/o ‘64), were members of this great organization. Howard University students from the 1960s also played a pivotal role into pushing Howard administration to create a Black Studies curriculum, which would later evolve the Black Student Union and Black Studies movements nationwide from the 1960s through the 1970s. These moments in history also were around the time the Black Panther Party was progressing…therefore: Their history is our history.

Just yesterday, October 14, a powerful conversation with Paul Coates (father of journalist Ta-Nehisi Coates) and Lynn French, both former members of the Black Panther Party, was held in the Howard University Blackburn Digital Auditorium. Hosted by Howard’s Department of Afro-American Studies and the Nu Afrikan Communiversity, the two-hour conversation discussed the 50th Anniversary of The Black Panther Party and what it means in 2016.

LIVE on #Periscope: Conversations on the 50th Anniversary of the #BlackPantherParty at @HowardU #BPP50 https://t.co/qfKG7bzsgd

Did Howard University even bother to promote this needed dialog to the Howard community? No. And it’s a shame because the Black Panther Party’s history is OUR history.

Back in June, my first piece surrounding the Black Panther Party was when I wrote about Howard University alumnus Kwame Ture’s (known then as Stokely Carmichael) historic “Black Power” speech in Greenwood, Mississippi in 1966. Kwame, who was also former chairman of the Student Nonviolent Coordinating Committee (SNCC), popularized the phrase “Black Power” that would become a rallying cry for many activists throughout the country in a post-Civil Rights Movement era.

According to The Hilltop’s Policy Board by-laws, “The student newspaper, The Hilltop, should serve as an example of the importance of the freedom and responsibility of the press in an educational environment. The Hilltop is a medium for the careful and unbiased dissemination of news, information, and opinion of interest to the Howard University community. The student newspaper serves to further the education of its readers by expanding their horizons, enhancing their understanding of the world in which they live and by stimulating intellectual growth through free and responsible exchange of information and ideas.”

At a time where Howard is in the space of many milestone occurrences to come, such as the 2016 presidential election, the marking of its 150th anniversary in March 2017, as well as being in the mist of the Black Lives Matter movement across the country, The Mecca needs to remember why we should be at the forefront of these engagements in the 21st century through activism.

Hence, this is why next week, from October 20-23, I am intending to travel from The Mecca to Oakland, California as a representative of The Hilltop to cover the Black Panther Party’s 50th Anniversary Conference.

If Howard cannot publicly express the gratitude and importance of the Black Panther Party, I am intending to involve myself into Oakland, do the best that I’m able to report all that I can while there, and bring my journalism work back to The Mecca so that my fellow colleagues and Howard faculty, staff, and alumni can realize how vital it is to be proactive and not reactive. The time is now.

While it is important to do the best we can at The Hilltop to serve as the student voice of Howard University, it is also important for this newspaper to be involved within the community. We do this by becoming what one of my predecessors before me, Hodari Ali, expressed during his time as the editor-in-chief in 1975-1976: “The Hilltop is a weapon for freedom, and the truth is the foundation in our efforts.”

As the theme of the 50th commemoration of the Black Panther Party for Self-Defense next week is “Where Do We Go From Here?” let us at Howard reawaken ourselves to realize why our institution is also known as The Mecca: To learn, to grow, and to give back by serving our people. 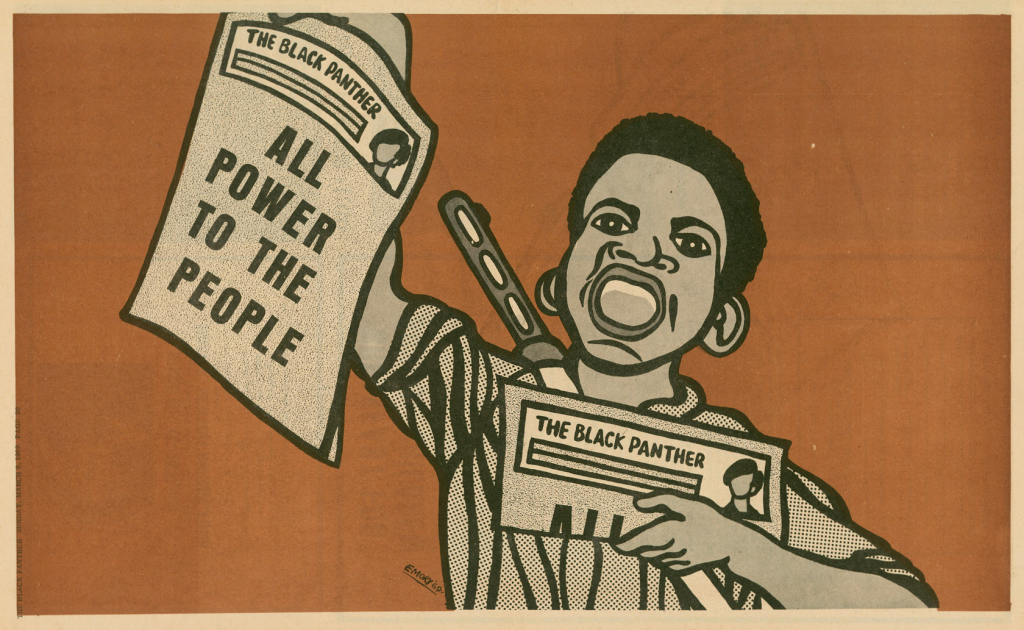 March 9, 1969: ‘All Power to the People’ was a slogan often used by the party. (Photograph: Emory Douglas /PR)