Kellie R. Griffin has spent more than 16 years in Hollywood cutting her teeth as a writer for some of America’s most popular shows, including “The Parkers,” “Eve” and “House of Payne.” Now, as the Howard University alumna expands her career as a writer, producer and host of her own podcast, “Bison Chats,” she is looking to give back to her alma mater in the best way she knows how: The creation and eventual production of a feature film. 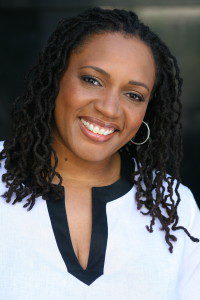 A native of Philadelphia, PA, Kellie R. Griffin holds both a Bachelor of Science degree in Psychology and a Masters degree in Social Work from Howard University. (Photo Courtesy of www.krgbisonproject.com)

Now entering its second cycle of applications, Griffin’s brainchild, the KRG Bison Project, is designed to do more than make a feature film—it was created with the goal of uniting Howard students and alumni in the small, cutthroat entertainment business.

Through the KRG Bison Project, Howard University students and alumni will have the opportunity to be a part of the production of a feature film from start to finish. Griffin’s goal is to make history by using a cast and crew comprised entirely of Bison, whether they are currently in the entertainment field or trying to break into it.

“This is a love project,” said Stacey Alphonso, co-director of the project. “More, it is an opportunity—it is so important to build relationships while in Hollywood.”

As the project’s second deadline approaches, both Griffin and Alphonso are determined to make sure as many Howard students as possible submit their applications and scripts. They understand that some students may have received competitive offers, but few invite them to be considered to take part in history.

“We prefer to have people who are involved with this because they see what they can be and because they have a lot of love for this university,” Griffin said. “[Students] should do it because they love this school and wish to see [this production] happen.”

Students have until December 10 to submit their scripts. Winners will be announced in early 2017.

Great News! We've reset the submission deadline to DECEMBER 10, 2016! Now you have NO excuse to SUBMIT THAT SCRIPT! pic.twitter.com/7BbrwYsyoV