The Hilltop Newspaper will be reporting a series on #ExperienceBluePrint before, during and after. Here, our Editor-in-Chief gives an overview of what’s to come for Howard Homecoming 2016.

Autumn has finally arrived in the nation’s capital. And with that, so has the beginning of a historic staple of The Mecca: Howard Homecoming.

Saturday, October 1, officially kicked off the schedule of events for this year’s Howard Homecoming. According to the 2016 Howard University Homecoming Steering Committee, the theme, “Blueprint” [#ExperienceBlueprint], was selected to create a new standard for future homecomings. The planning for “Blueprint” started back in February.

Recognizing the Past, Celebrating the Present, Embracing the Future #SaveTheDate #HUHomecoming16 pic.twitter.com/N7iOn4VdsR

“Our tagline is, ‘Recognizing the past. Celebrating the present. Embracing the future,’” said Katherine Powell, student public relations and marketing director for the Howard University Homecoming Steering Committee. “We really wanted to incorporate that aspect to current students, the alumni and the D.C. community.” 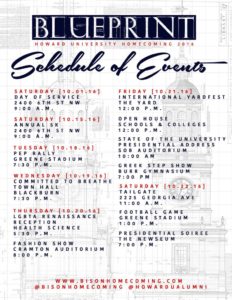 After concluding the kick-off event of the “Day Of Service” today, the next event is scheduled for Saturday, October 15 at 9 a.m., the “Annual 5K” race, which provides alumni, students and the community with an opportunity to engage in a day of fitness, fun and friendly competition while raising proceeds and awareness for Emergence Community Arts Collective.

.@BisonHomecoming has officially kicked off their 2016 schedule of events today with #BisonAtWork Day Of Service: https://t.co/pRrATDro5m

It might be rainy outside, but it's still a great day for service! #BisonAtWork #ExperienceBluePrint pic.twitter.com/uvql8lbGdX

The “Pep Rally,” which the Steering Committee has said is one of its major events for students, will happen on Tuesday, October 18 at 7:30 p.m. at William H. Greene Stadium.

As part of a multifaceted response by Howard administration and faculty to recent police shootings in Louisiana and Minnesota, Howard Homecoming will host a “Committed To Breathing” town hall, Wednesday, October 19, at the Howard Blackburn Ballroom. According to the steering committee, the town hall is designed to allow panelists and attendees to discuss issues related to police violence against Black populations, the role of race in the 2016 presidential elections and the impact of political conservatism on the Black diaspora.

Two events will occur back-to-back on Thursday, October 20, as an “LGBTA Renaissance Reception” will occur at the Louis Stokes Health Sciences at 5:30 p.m., followed by the fashion show, another major Homecoming event, at 8 p.m. at Cramton Auditorium. There will be only one fashion show this year as opposed to the normal two, the steering committee said.

The day that is sure to be one of the most memorable days of Homecoming is Friday, October 21. For the first time in three years, “Yardfest,” one of Howard Homecoming’s biggest, premiere events, is back and will start promptly at 12 p.m. on The Yard, according to the committee.

“Yardfest is back.” We can’t say it any clearer.

Nope! Free for all! The more, the merrier https://t.co/b5EPVVDLqn

This year, the steering committee is set to help reinvigorate the International “Yardfest” by presenting a live stage featuring top tier artists that will reach each demographic reflected in the Howard diaspora. But while “Yardfest” is sure to fill the Yard and The Mecca in its entirety this year, it comes with a cost.

“We’ve taken away some events,” said Victor Montgomery, director of special events at Howard University. “There’s no hip-hop show this year, no R&B show, no gospel show and also no parade.”

No ma'am. There will be no parade this year https://t.co/zfoOMoq4Sn

By reducing the number of events and moving most events back to campus, the planners hope to return Homecoming’s focus to the alumni, and welcoming them back home, he said. “While these [other] events are really good events, it’s with hope that our major events this year will be filled to capacity, such as the pep rally, fashion show, step show, ‘Yardfest,’ the homecoming football game and tailgate,” said Montgomery.

Before Yardfest, Howard President Wayne A.I. Frederick is set to give a “State of The University Presidential Address” at 10 a.m. in the School of Business auditorium. Also, “Open House” throughout Howard’s schools and colleges will occur simultaneously with “Yardfest,” beginning at 12 p.m. Another major Homecoming event, the “Greek Step Show” will conclude Friday’s festivities, beginning at 7 p.m. in Burr Gymnasium.

The last day of “Blueprint” festivities will include the Homecoming “Tailgate” in the Howard Center parking lot on Saturday, October 22, at 11 a.m., followed by the Homecoming “Football Game,” as the Howard Bison will face the North Carolina A&T Aggies at Greene Stadium. Kick-off is set for 1 p.m.

All of this year’s events are set to happen on-campus, except one, which is the “Presidential Party” to occur at the Newseum on Pennsylvania Avenue, Saturday, October 22 at 7 p.m.

The university’s Development and Alumni Relations Department is working closely with the Homecoming Steering Committee in planning and execution this year, and both entities feel confident that the Howard community, past, present and future, will be satisfied with what is expected to come from “Blueprint.”

“We are excited about ‘Blueprint’ and we’re trying to go back to the roots of Homecoming, as well as incorporating the prospective students and everyone in the community as well,” said Powell.

“We’re proud of what we’ve accomplished so far,” Montgomery said. “What you’re going to see during Yardfest is acts that are going to directly speak to the alumni and then also mix in current acts that will identify with out student demographic as well. We hope to show this by the artists that we’ll pick.”

Both entities also hope that the Howard community recognizes the value of its alumni: Montgomery said that this year’s Homecoming will be unapologetic in expressing that Homecoming should always be about the alumni first.

“We will have student representatives in lieu of all of the events,” said Montgomery. “We also want to show that we are ‘One Howard’ as well. The goal is to make these events staple events so that not only do current students and alumni bring energy to it, but also the D.C. community.”