“I represent the 13th District, home of the Black Panther Party,” said Lee, who volunteered for the Black Panther Party’s Community Learning Center in Oakland in 1968 and worked on the Oakland mayoral campaign for Seale in 1973. “We think this is an important event about millennials, young African-Americans and us in Congress with engagement on why the connection hasn’t been made and little enthusiasm for politics.”

Topics discussed during the panel involved focuses on mass incarceration, different aspects of commitment to Black liberation and the economic implications that affect Black lives economically. More importantly, the discussion of similarities between the Black Lives Matter network and the Black Panther Party echoed throughout the 90-minute conversation.

Garza expressed that while there are similarities; there are also differences between the Black Lives Matter network and the Black Panther Party.

“We get this question a lot, well are you like the Black Panthers? Well, we stand on the shoulders of giants and heavily influenced by the Black Panther Party and many revolutionary organizations,” said Garza.

“One of the core differences between Black Lives Matter and the Black Panther Party is that we are living in a fundamentally different political moment. There are many different connections, but the systems that we’re fighting are advanced, have become more sophisticated and able to absorb some of us in it,” she said.

In terms of the aspects of activism and building organizations for today, Seale expressed that “we are still in a consistent struggle for our liberation.”

“I’m a programmatic person, I don’t like to just talk about something, I want to plan,” said Seale. “I’m going to try to push and get the brothers and sister to evolve to today’s issues as that’s important because that’s what I attached to the Black Panther Party.”

“We had 22 different grassroots programs and, at the same time, were serving the people. We’ve got to support the Black Lives Matter movement and they have to get creative in many different ways,” he said.

When discussing the Civil Rights Movement in the 1960s versus the work happening currently in 2016, there was a common agreement in both the old and young participants in the panel: The work must continue.

“We have to put our names on the ballot. You have to have political seats to exercise power. That is power,” said Seale. “Even the young people on panel, for the fight and the struggle that they advocate for…they’re going to pay a price. But it’s up to us that they don’t do it alone.” 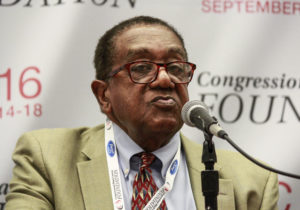 “Those who are involved in the social struggle in this country, I represent the strength and the struggle of the human spirit,” said Woodfox. “It took me 44 years to sit on this panel. The same issues that exists 44 years ago still exist in this country now.”

The economic fight against African-Americans also became a topic of discussion, as while panelists did differ in opinions, all agreed on the common ideology: The need to build and rebuild power.

“How do we build economical power, political power, social power for our people are important questions and it’s not one that we have unity on,” said Garza. “The question of how to build power is something that not everybody has the same point, opinion, viewpoint or strategy we can grappling with.”

“We have to push ourselves.” Mallory added. “We have to start being a little more disciplined [economically] and asking questions about the brands we purchase.”

“Our messaging has to change, upgrade our tone, and see what we’re willing to sacrifice stuff that we are comfortable in to get uncomfortable,” she said.

Seale on the other hand expressed that voting is a fundamental aspect into building power.

“It’s not just the Black Panther Party. I created a job program,” said Seale. “Congress is key into pushing these kind of things. I say to our young movements to attach and see the relevancy of voting.”