More than 30 Howard students stood with Black students at American University in its Mary Graydon Center by attending a protest organized by the university’s Black Student Alliance on Monday, Sept. 19. 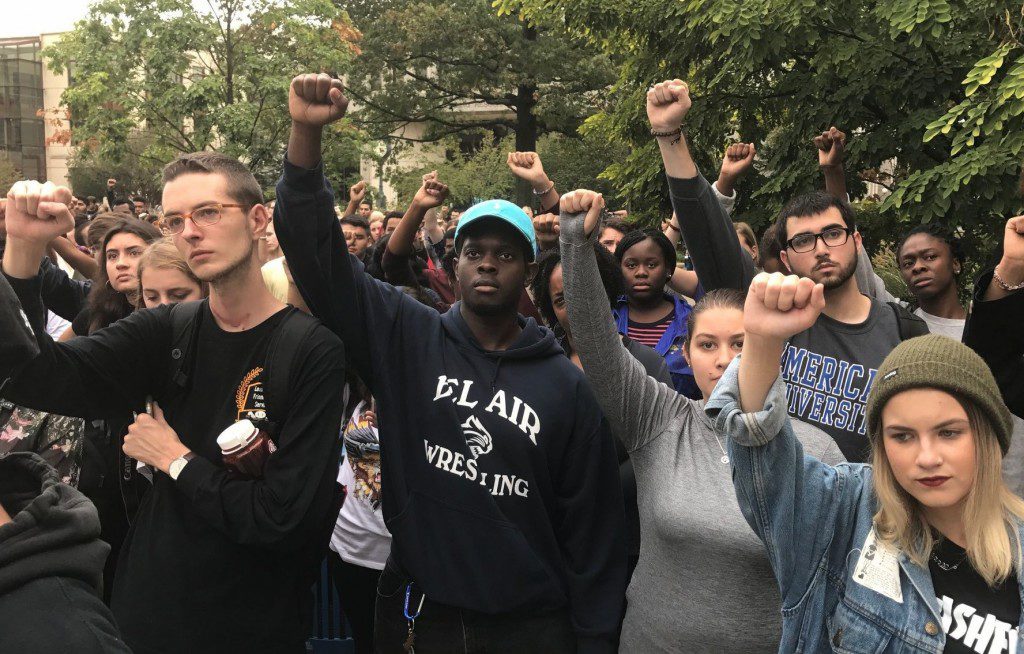 Students protest at American University on Monday, Sept. 19, following racist incidents at a student dorm, including one in which a banana was thrown at a black student. (Photo Credit: Alejandra Matos/The Washington Post)

The protest was a result of last week’s series of racially-charged incidents at AU, after two Black freshmen were physically and verbally harassed with banana peels and racial slurs by their white, male fellow students. The BSA tailored the protest with calls to action, voicing their concerns about the lack of diversity initiatives on campus and compiling a list of demands that included the immediate suspension of the aggressors and hiring of more professors of color. To some, the protest did not come as a shock.

“The lack of support that the Black community has received in response to multiple instances of racism on campus initiated this movement,” said Marissa Scott, a sophomore at AU.

Just as Howard students stood in solidarity with students at the University of Missouri in November 2015 during the beginning of their university policy protests, they joined AU students last week to protest campus racism and discrimination.

According to Joshua Noel Rivera, a sophomore transfer student from AU, the university’s Black population is not the only target of racism either.

“[Latin American students] have had Trump stickers posted on their doors, Asian Americans have had messages such as ‘chink’ written on their whiteboards,” Rivera said.

“I went in support of my fellow students of color to show them that even though I left American University, I am still with them and will do what I can to help make a change,” he said. “While I am no longer a student [of AU], I really went there to support the organizations on American’s campus who are pushing to make a change.”

Scott is grateful for the support from other school.

“Other universities being present helped,” said Scott. “It’s nice to know that people care–whether its C.A.S.C.A.D.E. from Howard at our events, or the whole Howard population at our protest, the more the merrier,” she said.

The Institute of the Black World 21st Century (IBW) organized a national town hall meeting during election week to discuss Black politics and the...

U.S. Representatives Convene at Howard To Discuss the Importance of Passing the CROWN Act

United States Representatives came together at the Louis Stokes Health Library to discuss the importance of the CROWN Act and the impact it would...

With the new release of the Black Panther sequel, “Wakanda Forever,” a “Howard Forever” event was held as a tribute to honor the legacy...

Democrats’ performance in the 2022 midterm election defied history for how the president’s party usually fares during midterm elections, as they maintained the Senate...