Pulitzer Prize winner and New York Times bestseller Isabel Wilkerson, added another achievement to her resume when she was awarded the National Humanities Medal from President Barack Obama Thursday, Sept. 22, at the White House.

The award, given by the National Endowment for the Humanities, recognizes writers, public figures and publications whose work best represents humanities in the fields of research, advocacy, history and storytelling, among others. In its nearly 20-year history, the NEH has granted more than 150 medals to America’s most prominent writers, researchers and activists.

The ambiance of the recognition for Wilkerson, a Howard alumna (c/o ‘84), seemed more than deserving. Since its publishing in 2010, “The Warmth of Other Suns”, a piece highlighting the journey of more than six million African-Americans from the South to the North during the Great Migration, has sold more than two million copies and has been featured in classrooms nationwide as core reading material. 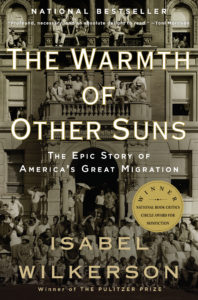 Isabel Wilkerson’s first book, The Warmth Of Other Suns, recipient of the National Book Award for Nonfiction. (Courtesy Photo)

To Wilkerson, the NEH’s award is icing on the cake.

“It represents the culmination of all the work that went into the 15 years of researching the book, getting it out into the world, and sharing this story—this unrecognized story—that was invisible to our country,” she said. “It’s something I could never imagine in the midst of all the research. It feels like such a celebration and such an honor.”

While a student at Howard she began working for The Hilltop as a freshman, and was editor-in-chief from 1981-1982. From there, she worked at the Los Angeles Times, Washington Post, and in 1994, while Chicago bureau chief of The New York Times, she became the first woman of African-American heritage to win the Pulitzer Prize in journalism.

In the midst of all her accolades, Wilkerson maintains that her work is unfinished. “This is just a continuation,” she said.

When asked to provide a word of advice to aspiring writers, Wilkerson stressed the importance of looking beyond oneself for inspiration.