On Aug. 25, Colin Kaepernick made headlines for refusing to stand for the National Anthem before kickoff in the San Francisco 49ers’ preseason game against the Green Bay Packers.

“I am not going to stand up to show pride in a flag for a country that oppresses Black people and people of color,” Kaepernick said in a postgame interview. “To me, this is bigger than football and it would be selfish on my part to look the other way.”

His initiative to remain seated as a form of personal protest has sparked controversy throughout the National Football League (NFL) and nationwide.

“It’s hard for me, because my brother was a Marine, and he lost a lot of friends over there,” Boone told USA TODAY Sports. “That flag obviously gives [Kaepernick] the right to do whatever he wants. I understand it. At the same time, you should have some (expletive) respect for people who served, especially people that lost their life to protect our freedom.”

Boone, along with other football players, NFL fans and everyday Americans disavowed Kaepernick throughout the week. However, their words said more about them than it does him.

It is his right under the First Amendment to sit. That was his way of telling America how dissatisfied he is with the system that is supposedly built on “liberty and justice for all.”

Black people hardly see justice served when it comes to the lives of our Black men. Racial tension has been a present characteristic of our society for centuries, but we have learned to hide well. That is until names such as Trayvon Martin, Mike Brown, Eric Garner, Oscar Grant and Sean Bell began to ring during nightly newscasts.

These are names from an ever-growing list of innocent fathers, sons, uncles, brothers and friends being murdered by police officer who get paid leave and never receive indicted.

This protest brings to light the ills of American society. One being, criticizing others before thoroughly analyzing their actions.

Before you criticize his actions, try singing the unsung third verse of the anthem, written by former slave owner, Francis Scott Key.

“Their blood has wash’d out their foul footstep’s pollution. No refuge could save the hireling and slave / From the terror of flight or the gloom of the grave, / And the star-spangled banner in triumph doth wave.” 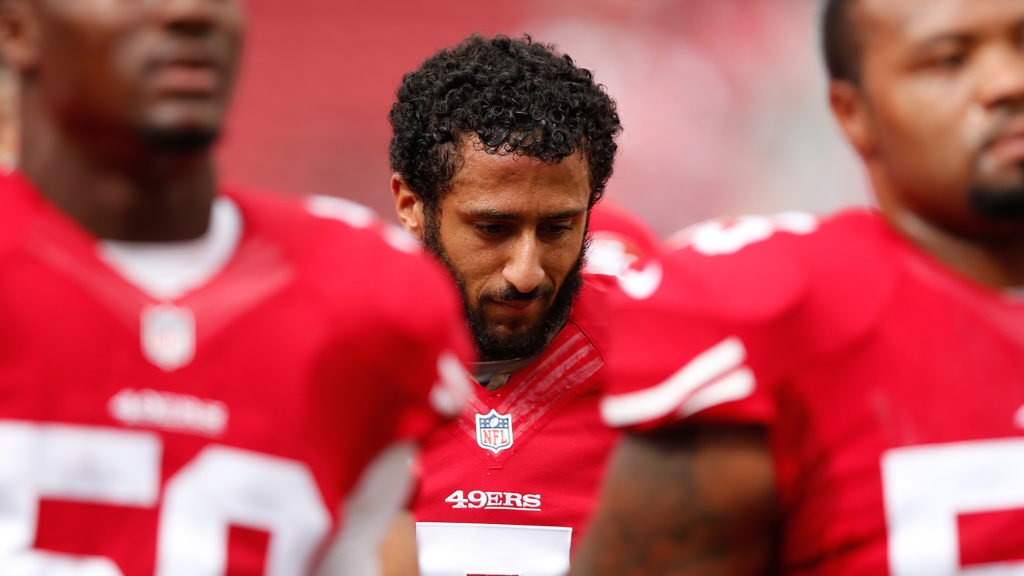 SANTA CLARA, CA – OCTOBER 18: Quarterback Colin Kaepernick #7 of the San Francisco 49ers warms up prior to playing the Baltimore Ravens in their NFL game at Levi’s Stadium on October 18, 2015 in Santa Clara, California. (Photo by Ezra Shaw/Getty Images)