As part of a national day of action, the Cancer Moonshot hosted a summit in the Armour J. Blackburn University Center ballroom at Howard University, Wednesday, June 29.

"If there are any Angels in heaven, I believe they are all nurses." @VP #CancerMoonshot pic.twitter.com/xULZQWA13V

The event that also involved an announcement from Vice President Joe Biden is the first of many that will be held over the next year. The Cancer Moonshot will host more than 270 events in all 50 states, including Puerto Rico and Guam. Over 6,000 researchers have come together to present their research and new prevention strategies on 200 distinct cancers.

Thirteen months after losing his oldest son to brain cancer last year, Biden joined over 350 researchers, to include oncologists, care providers, data and technology experts, patients, families and patient advocates at Howard University in order to discuss the progress on furthering the complete analysis to care of cancer.

“And that Cancer Moonshot grew out of a sentiment that — I acquired that we are on the cusp of an awful lot of change,” said Biden, “[President Obama gave me] authority over all cabinet positions as if he were doing it, to engage the entire federal government, every cabinet agency that has any possible impact on the fight against cancer.”

The summit was convened to garner support for the administration of President Barack Obama’s cancer research advancement project. The National Institutes of Health (NIH) made a $195 million investment in fiscal year 2016 as part of a proposed nearly $1 billion budget initiative for the Cancer Moonshot.

According to the National Institute of Health, cancer is one of the leading killers of Americans, responsible for more than 500,000 deaths annually.

Researchers, oncologists, patients and patient advocates, industry leadership and data and technology experts joined the summit as part of the private sector to Biden’s call to action.

“As part of the Cancer Moonshot, a series of collaborations have been sparked allowing us to do things we have not been able to do yet,” said Dr. Axel Hoos, head of oncology at GlaxoSmithKline.

“As the Vice-President has personal connection to cancer, this summit has been coordinated with passion and the true intent to find a cure for it,” said Dr. Danielle Carnival from the White House Office of Science and Technology Policy.

For over a decade, according to the Washington Post, Washington D.C. has had the highest rate of Black women seeking treatment for advanced breast cancer.

Howard University President Dr. Wayne A.I. Frederick, who opened the summit by congratulating the President Obama’s administration on calling in Biden during his 2016 State of the Union address, said that the statistic of African-American women with cancer is important to highlight.

“When I came back to D.C., in a two-year period I operated on 24 women who had fungal breast cancer,” said Frederick, who is also a Howard-trained surgeon at Howard University Hospital. “African-American women die more from breast cancer than women aged 49 [and over] worldwide.”

By having the cancer moonshot on the campus of Howard University, Frederick said that this promoted the mission of Howard University’s Cancer Center to a community of people from various ethnic and cultural aspects of minority and underserved populations.

“The mission of Howard University’s cancer center is to reduce the burden of cancer to research, education and service with emphasis on the unique ethnic and cultural aspects of minority and under served populations,” said Frederick.

“It is this the similar spirit of innovation that went into creating the Howard University Cancer Center almost a half century ago, which makes this is a historic day as a major part of the lead to end cancer happened here at Howard University.”

During his speech, Biden noted Howard University for being a research-based institution as it is also taking part in leading the Cancer Moonshot. 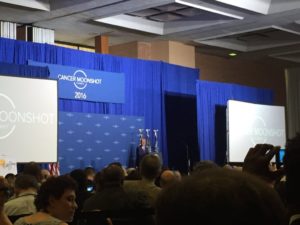 The National Institute of Health reports that by 2020 there will be 14 million new cases of cancer and 8.2 million cancer-related deaths worldwide. Furthermore, predictions on the number of new cases will rise to 20 million and deaths at 11.4 million within the next two decades.

“It became evident that the Obama Administration is committed to supporting the essence of American innovation to identify new ways to prevent, diagnose and treat cancer,” said Frederick.

As Cancer Moonshot advances to double the rate of advancements toward the end of cancer, Biden expressed determination of trying complete decades worth of progress in just five years.

“I believe we can make exponential progress in the next five years in what we can ordinarily do in 10 [years],” said Biden. “We owe it to future generations to cease this moment to move with deliberate purpose and double our level of progress to solve this problem.”

And cancer affects not only the patients with the disease, but also families and friends who are bonded to the patient.

American actress and comedian Carol Burnett spoke during the Summit about the reasons why the Cancer Moonshot has resonated with her most. Her and Biden shared a common bond of being parents who have lost their children to cancer.

“I lost my daughter Carey to cancer 14 years ago when she was 38, said Burnett. “This Cancer Moonshot Summit is the first of its kind because it gives us every reason to hope. For a cancer patient, and the families affected by it, hope means everything.”

Students at Howard University also experienced similar, unfortunate situations of their own.

“My aunt had a heart for children and a love for the sciences until she died of a cancer-related death,” said Brandon Alexander, junior finance major. “I felt the best way to honor her legacy was to create the Claudia J. Alexander scholarship for aspiring STEM students.”

With the initial summit taking off the initiative, representatives from the Cancer Moonshot ensured that the beyond the conversations, the fight to finding the cures to end cancer once and for all is the top priority.

For more information on the Cancer Moonshot Summit, read more here from the White House Office of the Press Secretary:

Amber Broaden is a transfer student and a senior psychology major, African-American Studies minor from Lancaster, California. She is interested in traveling the world to develop deep cultural understanding, practicing criminology, pursuing clinical psychology in graduate school. Her passion lies in the intersectionality of black life and orientation, art, music, and poetry. She hopes to be noted as a revolutionary woman. Contact her on Twitter at: https://twitter.com/NIGGRETTE.