The new music video, which he debuted July 1, begins with a short black and white clip of BLVCK’s girlfriend arranging to meet with another man while he calls for her join him in bed. “Battle” captures the pain and remorse felt due to the infidelities of his girlfriend.

BLVCK’s style is quite unique. While staying true to the R&B sound, he demonstrates his lyricism throughout the song. His metaphoric play is heard from the first line when he states “I thought you were my American dream.”

The video constantly alternates between romantic clips of the couple and up close shots of his beautiful now ex-girlfriend. The song concludes as he passionately repeats “is this love?” as he bleeds out passion and his energy intensifies.

As an upcoming artist, SAM BLVCK has solidified his sound into the R&B genre. While effortlessly executing smooth dance moves, he proves to be a promising performer as well. Directed by Racquel Charles and Niara Nyabingi, “Battle” is a reflective representation of BLVCK’s talent and what viewers should expect from his future projects.

Check out his new music video below and tell him what you think directly! He can be found on his social media accounts below: 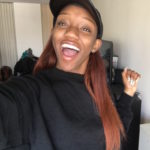 Shai Vaz is a sophomore public relations major from Queens, New York. Contact her on Twitter at: https://twitter.com/vazzs.