Known for being “The Greatest” and regarded as one of the most significant athletes and political figures of the world, boxer and activist Muhammad Ali died yesterday at the age of 74 in Phoenix, Ariz.

“After a 32-year battle with Parkinson’s disease, Muhammad Ali has passed away at the age of 74. The three-time World Heavyweight Champion boxer died this evening,” said family spokesman Bob Gunnell. “The Ali family would like to thank everyone for their thoughts, prayers, and support and asks for privacy at this time.”

Along with his complications of Parkinson’s disease, a progressive disorder of the nervous system that affects movement, Ali had been admitted earlier in week suffering from respiratory problems. Ali will be buried in his hometown of Louisville, Ky. 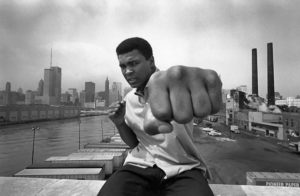 Born Cassius Clay Jr., Ali changed his name in 1964 after joining the Nation of Islam (NOI). After being named “Muhammad Ali” by then NOI leader Elijah Muhammad, Ali stated, “Cassius Clay is a slave name. I didn’t choose it and I don’t want it. I am Muhammad Ali, a free name – it means beloved of God, and I insist people use it when people speak to me.” In 1975, Ali would later convert from the NOI to Sunni Islam.

An outspoken revolutionary, Ali not only transcended the sport of boxing, but also elevated the voice of Black America. Unapologetically Black and proud of his culture, Ali would speak on numerous occasions in uplifting the African diaspora both nationally and globally.

As Ali involved himself in the 1960s Black Power movement and became a symbolic hero for the youth during that time, he also became an interpersonal educator as he spoke at various colleges and universities challenging racism and classism.

In particular, at Howard University, a federally chartered, private, coeducational, nonsectarian, historically Black university in Washington, D.C., in April 22, 1967, Ali gave a speech to students of Howard University on the steps of Frederick Douglass Memorial Hall just days before he refused induction in the Armed Forces for his conscientious objection to the Vietnam war. What is best known as his “Black is best” speech, Ali expressed to the audience why he believed that many in America felt inferior as African-Americans.

Ali also encouraged the audience to be proud of themselves as Black people, as well as being proud of their African heritage. 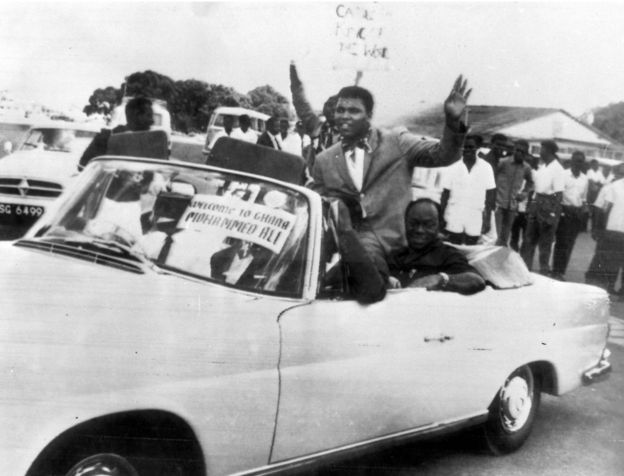 Ali embarked on his first African tour in 1964, saying: “I want to see Africa and meet my brothers and sisters.” His visit began in Ghana, the first country in sub-Saharan Africa to win independence from a European power. (Photo Courtesy: TOPFOTO)

“All you need to do is know yourself to set yourself free,” said Ali.

Following his death, President Barack Obama and First Lady Michelle Obama released a statement on his passing as it stated, “Muhammad Ali was The Greatest. Period. If you just asked him, he’d tell you.  He’d tell you he was the double greatest; that he’d ‘handcuffed lightning, thrown thunder into jail.’ Muhammad Ali shook up the world. And the world is better for it. We are all better for it.”

He shook up the world, and the world's better for it. Rest in peace, Champ. pic.twitter.com/z1yM3sSLH3

Ali is survived by his wife, Yolanda “Lonnie” Ali, and nine children.

Editor’s Note: Below is an excerpt of the PBS televisions series and 14-hour documentary “Eyes On The Prize,” in which this particular clip chronicles the emergence of boxer Muhammad Ali, the student movement at Howard University, and the gathering of the National Black Political Convention in Gary, Ind. #RIPMuhammadAli (Courtesy video)