The Hilltop: Describe your Howard University experience during the ’90s. How did this chapter in your life go in terms of student life, academics, etc.?

Geddis: If you can think of A Different World, that’s what it was like for us…it’s not a cliché. That television series was like my first introduction to Historical Black Colleges and Universities (HBCUs) and going away to school. As I watched the show on TV, it made me have that desire to want to go to a “Hillman” type of school. I wanted to get away from Queens, N.Y. to get that experience.

When I applied to Howard, to be honest, my family didn’t have the money and the resources to do college tours. The only thing we knew about colleges was what we heard people talk about from church when they came back and spoke about their experiences. I heard people talk about Howard and Morehouse and I actually got accepted into Morehouse, but I decided to come to Howard based on the stories that people told about the university. When I got an application to apply for Howard, it was from my high school counselor that had asked the students in the room during that time: “Does anyone want to go to Howard?” I was like: “I do!” I had great grades so my counselor assisted me with the application and I was a part of the early acceptance group during my high school years.

When I got to Howard, it was like a whole new world. I used to think that Black people were all the same, but then I saw at Howard so many eclectic Black folks. There were so many people who were conscious about learning who we were and where we came from. People were talking about their future and mobilizing. As a freshmen, my graduate assistant (GA) from Meridian Hill Hall (I used to live in Meridian…never lived in Drew Hall because my freshman class was overcrowded that year), I met a man by the name of Chester Marshall who was my GA and he introduced me to this group that he started called the “African Man Development Group.” It was a group within the dorm and that was the start of finding my consciousness of finding out who I truly was and what life was about as a man of African descent. Me being a future educator at the time, I found my spot, my niche, and I think it was all deeply rooted in serving leadership and began during my freshman year at Howard.

The Hilltop:  When and how did you decide that you wanted to run for Mr. Howard University at that time?

Geddis: Ironically, I was Mr. August Martin during my high school years at August Martin High School in N.Y. At Howard, I met a gentleman by the name of Chidiadi (Chiddy) Akoma [Mr. Howard University 1993-1994], and back when I came to Howard, they changed the rules to where before it used to be that anyone could just walk on stage and run for Mr. Howard. Then that rule changed to where you had to be your king/queen of your particular college before running for Mr. and Miss Howard University. I kind of took that on as my liking and my inspiration after getting to know Chiddy. Before doing so, I went on to become a campus pal, a resident assistant (RA), represented my college becoming Mr. College of Arts and Sciences first, then eventually became Mr. Howard University. 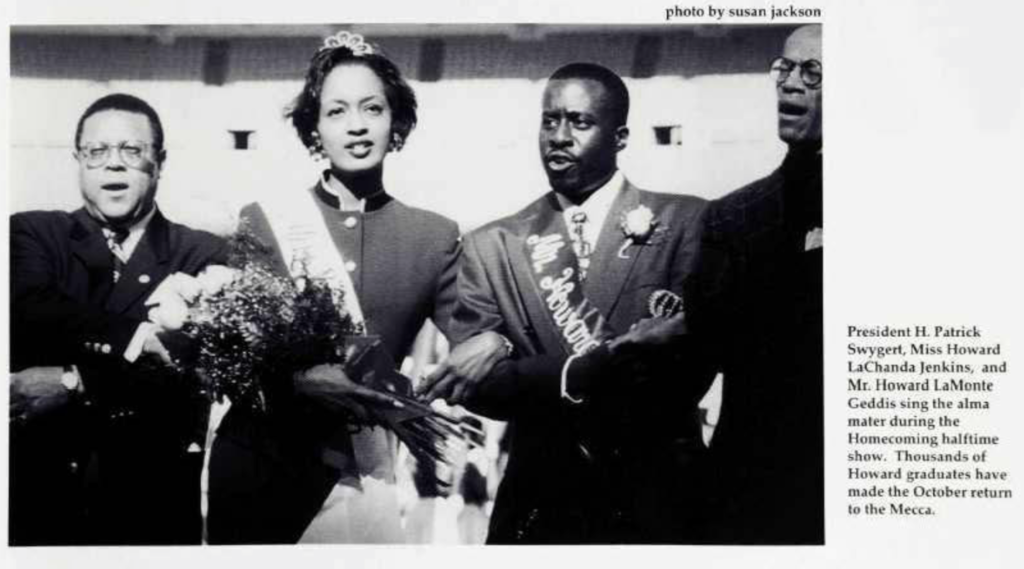 The Hilltop: What was your platform and talent during that time?

Geddis: I remember it vividly…it was “Say Yes To Education and No To Incarceration.” I talked about the prison pipeline from cradle to prison…how the government made primary education test scores factor into decisions of how many jails were to be built in America and how jails were privatized. I was talking about this in the ’90s and even now in 2016, it’s still relevant today. I remember when they [pageant judges] asked me what was my aspirations were after graduating, and my answer was to be an excellent husband, father and teacher. That answer definitely woo’ed the crowed. 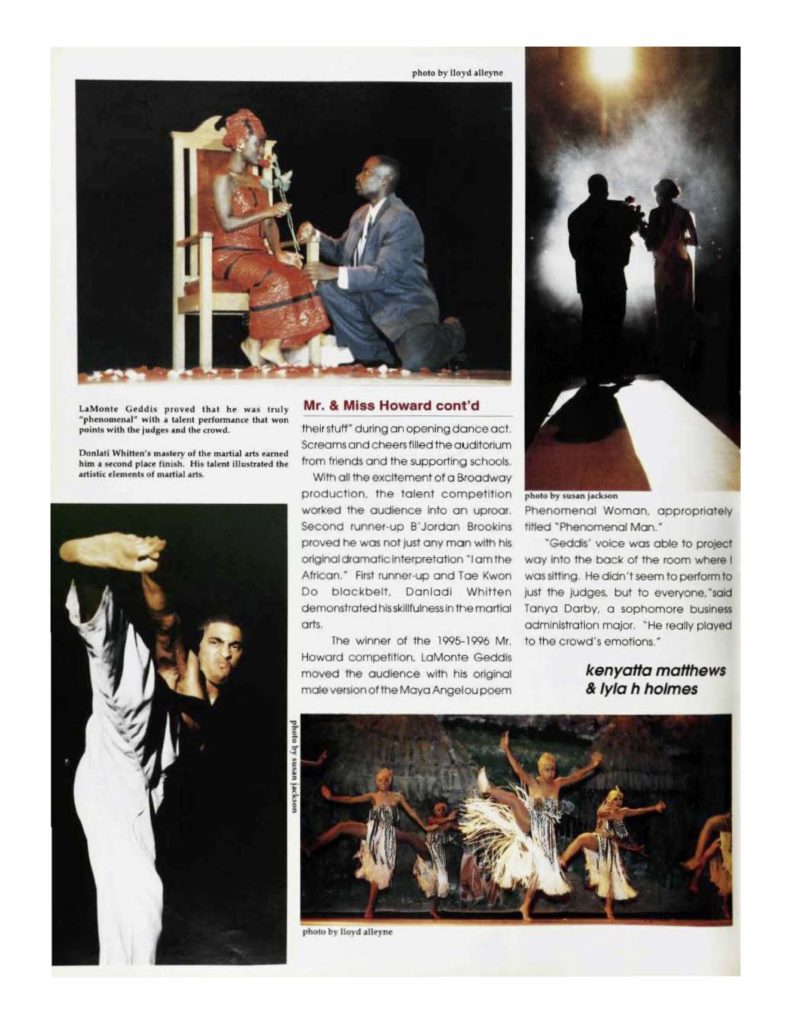 For my talent I did an original poem based on the mood of that era where we were in during that time. We were right in the mist of the first Million Man March where it was like a big response for men of African descent to stand up and take responsibility for their communities. I rewrote Maya Angelou‘s poem “Phenomenal Woman” to “Phenomenal Man” and people ate it up. It’s also ironic because my platform was based on education and then a few years later, I became a principal of one of Maya Angelou’s Public Charter Schools. I actually got the chance to meet Maya Angelou before her passing and she knew my whole story. A lot of things came together and roads merged for my life that you don’t normally see get to emerge.

The Hilltop: What was some stand out moments while you served as Mr. Howard University?

Geddis: One major moment that stands out the most was that it allowed me to build a mentoring program that became very accepted throughout the Howard community. It was a program with an acronym entitled “S.I.M.B.A.,” which was a reference to the Lion King during that time, but stood for “Safe In My Brothers Arms.” It was a male mentoring group between Howard students and D.C./local kids. When I became a principal within DCPS, we continued that program and renamed it to “S.I.M.B.A. Gentlemen’s Association.” In the program, we teach young men professionalism methods, such as how to tie ties, support with homework, schoolwork, sports programs, etc. It creates a mentorship from the older generation to the younger generation. That is its purpose and its still continues on today.

Geddis: I’m still an educator. I’m a principal that has just transitioned back to the United States. I recently finished completing a principalship in Saudi Arabia and I led an international school. 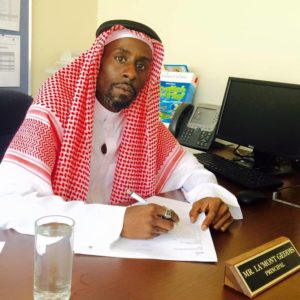 La’Mont Geddis, Howard University Alumnus, class of 1996, is pictured here during his time as a principal in Saudi Arabia. (Photo courtesy of La’Mont Geddis)

I came back to the U.S. a little bit early due to a family illness, which brought me back to the DMV. Now that I’m back here, I’m working with the Children’s Defense Fund and various freedom schools around the area consulting their national training. I’m still a part of the movement in terms of education. What I do is train teachers to create impactful pipelines to become better educators and ultimately transition that experience into an administration. That’s how my life is today.

I still feel very young…and whenever I return to Howard I always feel like I never left. If you’ve ever watched the movie School Daze, that’s how Howard felt for me and surely for many during that time…it still does. This year marks my 20th year that I’ve pledged and became a member of Omega Psi Phi Fraternity, Inc., Alpha Chapter. During 1995-1996, I became both Mr. Howard in the fall and an omega man in the Spring. I was very active and busy that year….a lot happened for me and it was really intense. 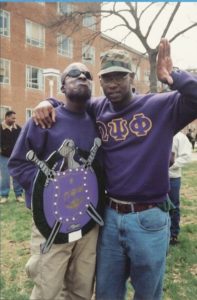 The Hilltop: As a former Mr. Howard University, what is some advice that you would give for those who desire to run for Mr. and Miss Howard University in terms of its responsibilities and titles that it holds at Howard?

Geddis: Take that pathway of Mr. and Miss Howard University very seriously. My advice to any Mr. or Miss Howard University going forth is to take that role passionately because you have a national platform that you’ll be able to speak about forever. Mr. Howard University didn’t necessarily create the pathway for me, but it definitely enhanced it. Years later, people are still about me being Mr. Howard and while I sometimes look back at it as just a moment in my college days, it really became a part of who I am today.