Editor’s Note: After pulling archives of The Hilltop Newspaper pertaining to the subject of Malcolm X and this particular visit to Howard University, the following commentary represents only the views of the Editor-in-Chief. The following does not describe entire details of the timeframe surrounding Malcolm X at Howard University, as The Hilltop staff cannot yet confirm whether or not this was Malcolm X’s only visit.

During the historical times of the 1960s, the United States was undergoing a massive shake up in its status quo. It would be almost 100 years after the signing of the Emancipation Proclamation, a document that declared that all persons held as slaves within the nation “are, and henceforward shall be free.” Although this document was signed into law by then President Abraham Lincoln on Jan. 1, 1863, slavery, racism, segregation and discrimination did not fully dissolve with it. Fast forward to the 1950s, after the 1954 U.S. Supreme Court decision to strike down the “separate but equal” doctrine, the civil rights movement would begin to take its place at the forefront during the 1960s. Along with it would be the rise of Black nationalism.

Malcolm X, also known as el-Hajj Malik el-Shabazz, was an African-American civil rights activist, political leader, minister and revolutionary who was prominently known for being a national figure in the Nation of Islam, as well showing race pride and black nationalism in the 1950s and 1960s. After his abrupt departure from the NOI in 1964, he would later on become more aligned with Pan-Africanism and form the Organization for Afro-American Unity. In this particular timeframe, however, these views surround his visit to Howard University on October 30, 1961, while still being a part of the NOI. On this particular day, Malcolm X would debate civil rights activist and integrationist leader Bayard Rustin at Howard University’s Cramton Auditorium. Michael R. Winston, former Howard University provost and chief academic officer in 2014, was the debate moderator for the event. 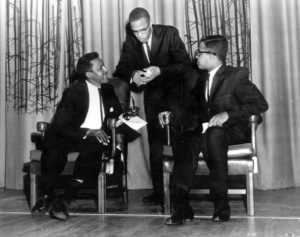 This is a October 30, 1961 photo of Bayard Rustin (seated left) and Malcolm X (standing) at their Howard University debate. Seated to the right is Michael Winston, the debate moderator. (Photo Credit: AP / John Duricka)

According to The Hilltop Newspaper’s 1961-1962 staff, under then editor-in-chief Jerome H. Wood, the creation of a “Project Awareness” liberal arts council program was approved by then Howard University’s 12th President, James M. Nabrit. This allowed controversial speakers and issues to come to the campus. With this approval, Malcolm X, who then was serving as a NOI minister, would be approved by Nabrit to come to Howard University for this anticipated debate. Although some students and staff would look forward to Malcolm’s arrival, there were also other students and faculty who questioned the appearance of the Black nationalist out of fear of “violence, hostile demonstrations and general chaos.” But as an editorial published in page two of The Hilltop‘s October 27, 1961 issue (this is to assume this would be their homecoming issue), it concluded that, “To fumble the ball at this hour would place a potent weapon in the hands of the opposition.” In my point of view, this statement written is very agreeable in that Malcolm X’s visit was needed at one of the nation’s flagship Historical Black Colleges and Universities (HBCUs) during these times.

After attempts to find the transcript or video of the actual debate between Malcolm X and Rustin, neither has been found (so far). There is archival proof that both Malcolm X and Rustin did physically meet with President Nesbit (see: Nov. 3, 1961, cover page) and according to 1961-1962 Hilltop staff, the staff was able to interview Malcolm X prior to the debate (see: Nov. 10, 1961, pgs. 2 and 6). Out of all of the questions that the staff asked Malcolm X, the last question stood out the most to me. It reads:

[Hilltop Staff] Q: You said that the Negro was America’s bravest but most ignorant soldier. Would the Muslims defend America in times of war?

Mr. X: When a man will fight and die for a country which keeps him in bondage, and for a master who oppresses him, that is bravery but it is also ignorance. If a wolf has some sheep in a den and another wolf comes to attack the wolf, are the sheep supposed to protect that den?

To be able to actually interview Malcolm X during the time of the rise of Black nationalism and the civil rights movement, while at the same time, the Vietnam War occurring simultaneously, it is to be believed that the 1961-1962 Hilltop staff might have been overwhelmed with the happenings that occurred during the times that they were living in. To be able to document these moments within Howard University’s student newspaper proves the importance of not only collegiate newspapers, but specifically, the importance of the Black Press.

With today being what would have been Malcolm X’s 91st birthday (he was born May 19, 1965), it is great to know that Howard University and The Hilltop contributed to his life in some shape, form or fashion. Although it was somewhat difficult to narrow down what archives to decide to pull up in light of this, it is important to point out how Malcolm X’s life has touched so many lives nationwide. For The Hilltop, his life and words will forever be cemented within its archives. It is with deep hope of carrying on Malcolm’s message from the pens of both present and future Hilltop staff members. One of my personal, favorite quotes from brother Malcolm should be encouraged to resonate with The Hilltop, Howard University, African-Americans, the African diaspora, and the entire world: 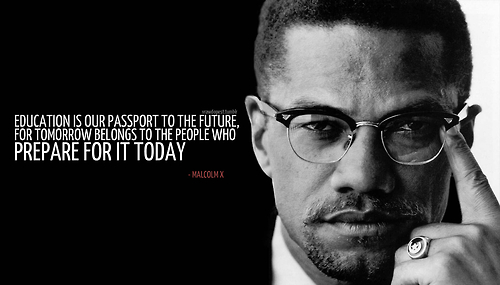