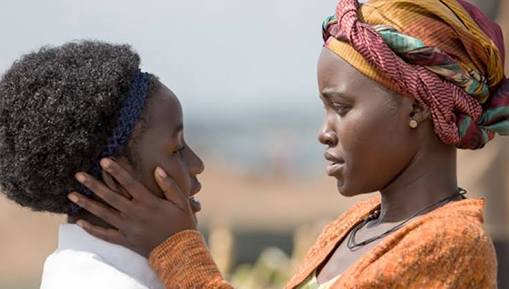 Lupita Nyong’o Delves Into the ‘Queen of Katwe’

Academy Award winner Lupita Nyong’o stars in “Queen of Katwe,” a true tale about a Kenyan girl who dreamed about becoming a chess grand master.

The film, which opened this weekend, depicts the life of Phiona Mutesi, a young Ugandan chess prodigy who grew up in the slums of Katwe and becomes a Woman Candidate Master after her performances at the World Chess Olympiads. Lupita Nyong’o plays her mother, Harriet Nakku. Newcomer Madina Nalwanga portrays Phiona.

Harriet Nakku is a no nonsense mother who tries to provide the best life for her children after her husband dies of AIDS. When Phiona starts to play chess at a Sports Outreach Institute after she is forced to drop out of school due to lack of money, Harriet fears that her competing in chess tournaments will only lead to more disappointment in Phiona’s life.

The director, Mira Nair, specifically wrote the part of Harriet Nakku with Nyong’o in mind. Nyong’o thinks it was an honor to play Harriet Nakku in “Queen of Katwe,” and she was so deeply moved by her character and Phiona’s story that she wept within the first 10 pages of the script.

“I was just so moved that this story was being told that it was a true story and it in it was from the perspective from this young girl, from an unlikely place with an unlikely dream and she achieves that dream,” Nyong’o said.

Although Nyong’o believes that she and Nakku have different views of the world, she appreciates how she fiercely tries to protect her children from disappointment.

“The character that I was going to play was this layered mother. A woman who sees the world completely opposite of how I see the world. A woman who is suspicious of dreams and wary of dreaming and thinks that dreaming is the enemy because of the disappointment that she’s experienced in her own life,” Nyong’o said.

“She’s fiercely trying to protect her children from expecting more from life than what they have been dealt, and her journey is one in which she has to discover that to truly love her daughter she has to let her daughter go and risk failure but also risk success.”

The film is principally shot in the slums of Katwe in Kampala, Uganda, and Johannesburg, South Africa. It has received praise for its all-black cast, setting and subject matter — something that is considered unusual for a major American studio release.

Nyong’o said that she made it her mission to learn a little bit of Luganda, the main language in Uganda, to try to stay true to the culture there and make it seem as authentic as possible.

“I was intending to learn the basics of Luganda when I got there because both Mira and I were very keen on peppering the movie with Luganda because that’s the way we talk really when you’re from a multilingual culture,” Nyong’o said. “You use all the languages interchangeably. I grew up talking like that in Kenya, and I knew that was the case as well in Uganda.”

When it came to playing Nakku in the movie, Nyong’o said she drew much of her inspiration from talking with Nakku and thinks that she is very fortunate to play someone who is still alive and is portraying a recent part of their history.

“I had Harriet, which I feel so fortunate to have had. It’s not very often that you get to play someone who’s still alive and play their very recent history,” Nyong’o said. “Before we started filming, she had just moved into the house that Phiona built her. So this is like the history of the 2000s, so I was able to sit with her and a lot of what I took was from her.”