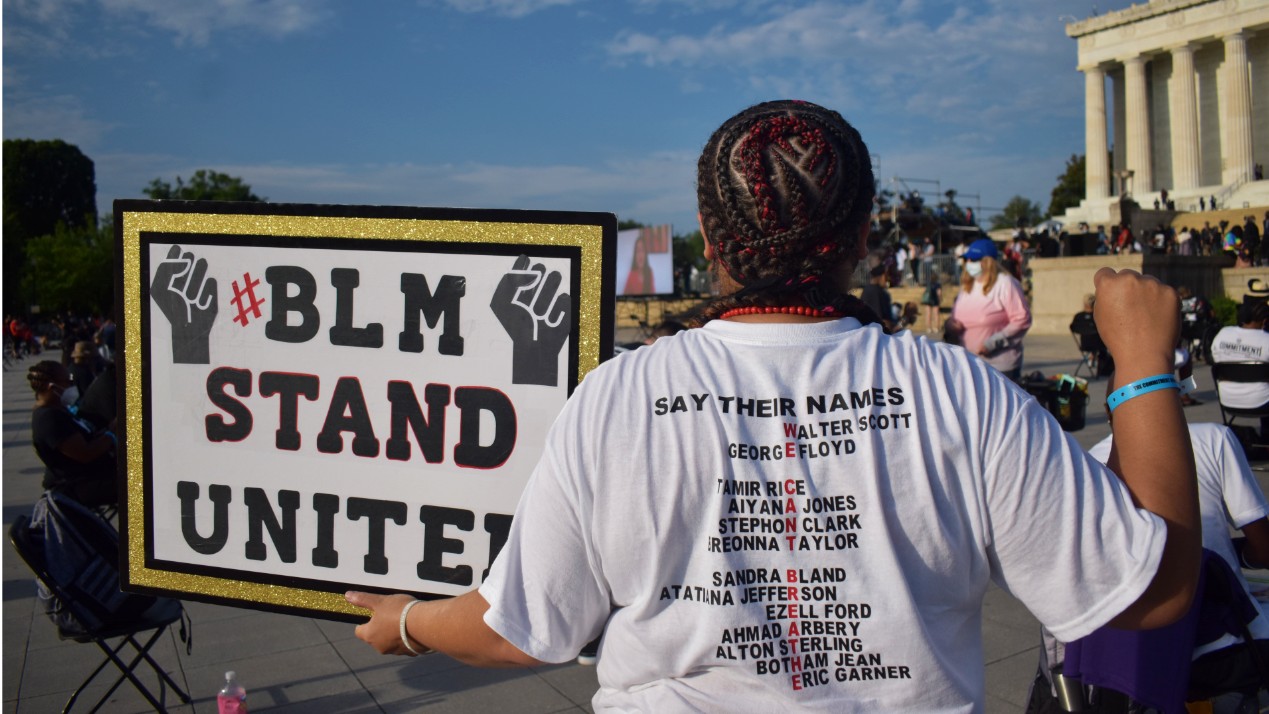 On the morning of August 28, 2020, hundreds of attendees took their seats in front of the Lincoln Memorial for the ‘Get Your Knees Off Our Necks’ pre-program. Speakers included many D.C. natives affected by local law enforcement. Thousands gathered in front of the Lincoln Memorial early Friday morning to fight for criminal justice reform in solidarity with those who have lost loved ones at the hands of state-sanctioned violence by law enforcement.The march symbolized the passing of the torch to the next generation of activists.

Several notable civil rights activists like Rev. Al Sharpton and Yolanda Renee King, 12, the granddaughter of Dr. Martin Luther King Jr, who spoke about the continued need for change and the mobilization of younger generations.

The event, hosted by the National Action Network (NAN), occurred amid growing COVID-19 concerns. Although the event did enforce social distancing precautions and temperature checks, many public officials questioned safety given the large turnout.

The 2020 March on Washington shares the same goals as the March in 1963. Nene Taylor, a core organizer for Black Lives Matter D.C., woke up the early rising crowd with her heart-wrenching speech detailing the faults of the Metropolitan Police Department. In her speech, Taylor declared “In D.C., Black Lives Matter means defund the police.”

Other speakers included the president and founder of the Coalition of Concerned Mothers, Marion Gray Hopkins, whose life was forever changed in 1999 after an off-duty Prince George’s County, Md. police officer gunned down her 19-year-old son. She has been fighting against state-sanctioned violence ever since the senseless killing. After the acquittal of her son’s murderer, Marion Hopkins still spoke vigorously to the crowd. “The time for change is long overdue. We demand change now, if there is no justice there will certainly be no peace”, she said to the encouraged crowd.

Several members of the Howard community participated in the march, though they had some reservations due to the ongoing pandemic.

“Everyone came with a purpose,” said Erica England, a senior political science major. She struggled with going to the event, but ultimately decided that it was history in the making, not only for Black people, but other allies as well.

The families of Breonna Taylor, George Floyd and many other police brutality victims came to speak as well.

“What we need is change and we’re at a point where we can get that change but we have to stand together,” said Tamika Palmer, the mother of Breonna Taylor who was killed during a no-knock raid in her home by police in March.

Freshman, political science major Obrian Rosario traveled with “The New York Justice League”, a social justice nonprofit. He found himself finding the “joy within the resistance”. He was inspired by seeing the intergenerational and interracial crowd.

Having several generations in the crowd sent a message that the fight for equality is not over. Young people consistently reject the status quo, and are shaping the movement to include and advocate for Black people of varying identities.

As the day went on, the crowd began to change, younger demonstrators filled the lawns with blankets, vendors sold everything from cold water to professional art, and different chants for peace could be heard throughout the National Mall.

Desmond Collins, a 24-year-old Baton Rouge, La. native came to the demonstration by himself. Desmond was standing to the side of the Lincoln Memorial Reflecting Pool in order to better view later program speakers, such as the families of George Floyd, Breonna Taylor, Eric Garner, Martin Luther King III, Reverend Al Sharpton and many more.

In explaining why he attended the march he said, “I am here because I believe in something. I think that though this is good on a demonstrative level the reality is 57 years ago something failed.”

“ It is time for a new generation with new solutions.”