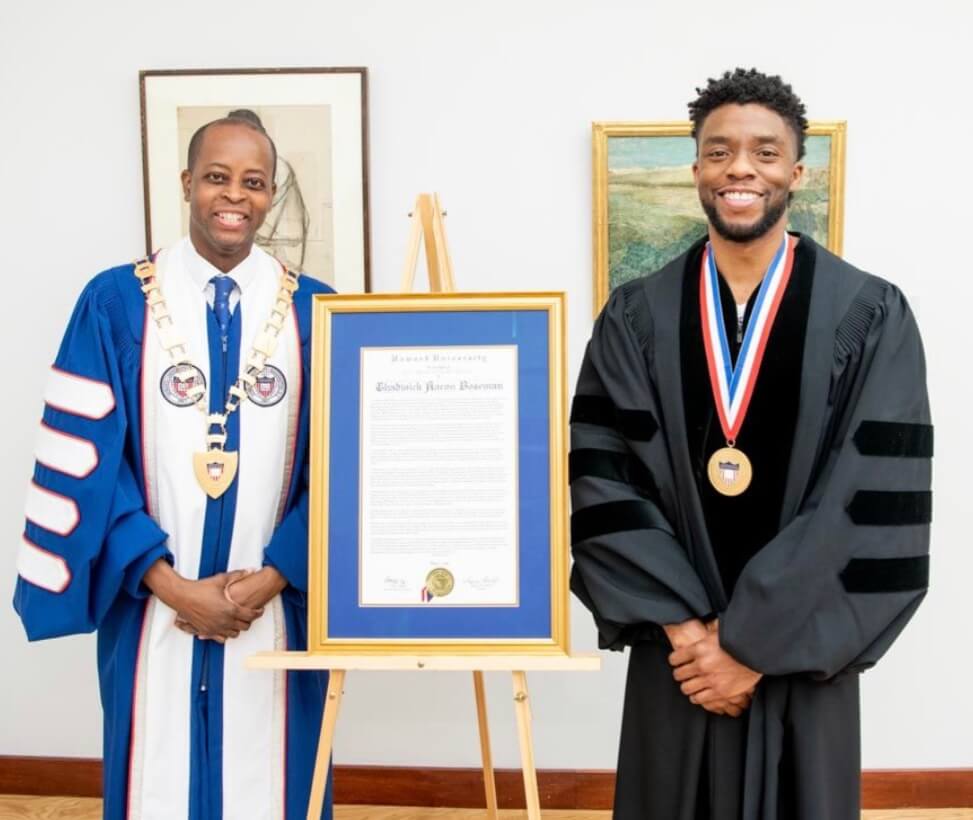 The death of actor and hero Chadwick Boseman is felt in homes across the nation.

He lost his life at the age of 43 after a four year battle with colon cancer. Though it was the cause of his death, he did not allow it to be the source of defeat. While receiving treatment, Boseman found time to create lasting work for his fans and leave an undeniable mark within the film industry. The films “Marshall,” “Da 5 Bloods,” “Ma Rainey’s Black Bottom” and several more were all filmed while Boseman underwent chemotherapy and countless surgeries.

In the midst of it all, Boseman still found time to give back to the Howard University community. He premiered the film “21 Bridges” in Cramton Auditorium to an audience of college students hungry for entertainment, knowledge and confirmation that they had chosen the right school to spend the next four years.

However, many of the students left with much more. Boseman alongside producer and Howard alumnus Logan Coles ignited a flame of passion and purpose that was spread across the crowd. The two shared how they had watched the personification of their goals guide them through the halls of Howard. They discussed how their experiences in the same building they sat in today molded them into a person with vigor and morale.

This is a truth Boseman amplified during the 150th Commencement just a year prior. “A Howard University education is not just about what happens in the classroom,” said Boseman during his address.

He went on to chronicle his journey to the top of the hill, a unique metaphor for his graduation. He spoke of the discord between himself and members of a not so understanding administration. At the time, he shared it was tiring to debate on seemingly deaf ears but later on discovered it had only prepared him to negotiate for new waves of change in his chosen career.

One that had been uplifted by professors in the Department of Fine Arts. He described it as a place that could compete with Julliard because it offered “a concentrated dosage that rivaled a conservatory experience.”

In the speech, Boseman said “Howard is a place where almost anything can happen.” Right after, he told the crowd about seeing Muhammad Ali on the yard. A moment where an undeniable exchange of energy had occurred while pretending to spar with “the greatest.”

Boseman said that day he was transferred the spirit of the fighter. This allowed him to go on and act in roles that actualize the dreams and aspirations of black males. His career was centered around breathing life into characters who amplify the talent and diversity present in the black community.

Boseman died on Aug. 28, the same day that Major League Baseball was celebrating Jackie Robinson day. A character who he effortlessly brought to life in the film “42.” In addition to “42”, Boseman starred in “Marshall” and “Get On Up”,  movies honoring Thurgood Marshall and James Brown. He also played the lead role of T’Challa in the widely-acclaimed and beloved Black Panther.

Howard University students, faculty, staff and alumni mourn the loss of Boseman. Students are petitioning to rename the Department of Fine Arts to the Boseman School of Fine Arts to honor his lasting impact on not just the Howard community, but the world.