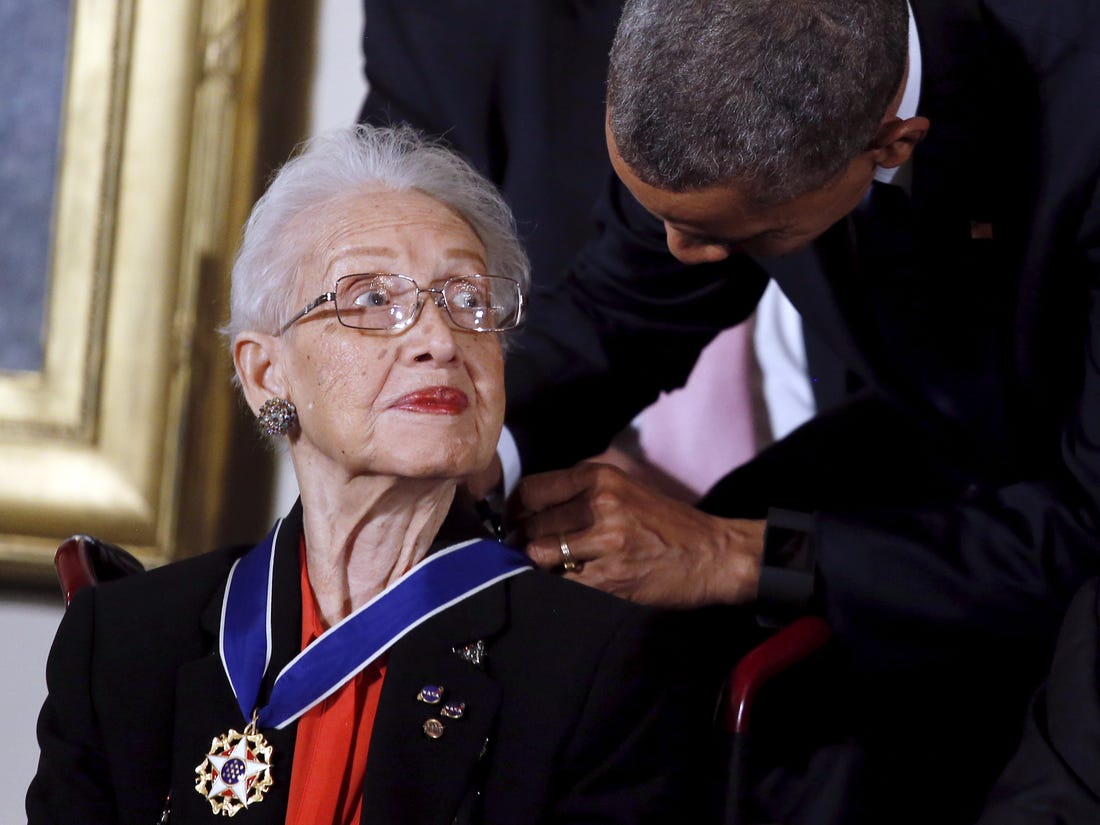 On Feb. 24, the world dimmed a little as one of our brightest lights passed on at age 101: a real-life Black superhero, The Katherine Johnson.

Katherine Johnson is hailed by NASA as “one of the first African-American women to work as a NASA scientist.” Known for her monumental feat of delivering the calculations of orbital mechanics that were essential to the success of the very first United States NASA flight missions, Johnson was also an important contributor in the fight for racial and gender equality in science. In her 35-year-long career at NASA, Katherine Johnson calculated trajectories, launch windows, and emergency landing paths for various flights under Project Mercury, of which included the successful trips of Alan Shepherd and John Glenn, the first American in space and the first American in orbit, respectively. Katherine Johnson’s calculations were also necessary for the success of the 1969 Apollo 11 flight to the moon, and an imperative contribution to the beginning of the NASA Space Shuttle Program.

Born on Aug. 26, 1918 in White Sulphur Springs, WV, Creola Katherine Coleman was a talented mathematician even from an early age. Her parents, Joshua and Joylette Coleman, sent her to attend school in Institute, West Virginia because public school was not offered to African American children past eighth grade. At only ten years old, she attended a high school in Institute, located on the campus of West Virginia State College and graduated when she was 14. Upon graduating, she attended the historically black college, West Virginia State (WVSC), and excelled in every math program that was offered. She was mentored by many notable black mathematicians, including Angie Turner King, one of the first African-American women to have a PhD in mathematics education and W.W. Schieffelin Claytor, the third African-American ever to earn a PhD in mathematics. Claytor was so impressed with Johnson, he added new mathematics courses to the WVSC curriculum just for her.

Johnson started her career as a teacher before she entered the National Advisory Committee for Aeronautics (NACA) and then the Langley Memorial Aeronautical Library as a research mathematician. NACA was the aeronautics agency that eventually formed into NASA. Johnson had trouble finding mathematician jobs because many did not hire African-Americans and/or women. She worked as a computer in a research division of the NACA office that was predominantly staffed by white men. She was required by pre-civil rights era segregation laws to eat, work, drink water, and use the restroom in separate facilities from her white male co-workers.

When reminiscing on her time working for NACA and NASA under these circumstances in the Black Women Scientists in the United States book (published in 2000), Katherine Johnson stated that “we needed to be assertive as women in those days – assertive and aggressive – and the degree to which we had to be that way depended on where you were. I had to be. In the early days of NASA women were not allowed to put their names on the reports – no woman in my division had had her name on a report.” She also went on to share that she was the first woman in the division that was allowed to put her name on a report she had done the majority of the work on.

To honor her accomplishments made in space science and mathematics and for her “[refusal] to be limited by society’s expectations of her gender and race while expanding the boundaries of humanity’s reach,” President Barack Obama awarded Johnson with the Presidential Medal of Freedom in 2015. Along with this honor, Johnson has also received the Silver Snoopy award (in 2016), the NASA Group Achievement Award (2016), and the Congressional Gold Medal (2019).

Johnson’s life was portrayed by actress and Howard alumna Taraji P. Henson in the 2016 film Hidden Figures. In the film, Johnson’s experience in working in a racially segregated office in NASA along with fellow black female mathematicians Dorothy Vaughn and Mary Jackson is highlighted.

In an Instagram post paying homage to Johnson after learning about her passing, Henson expresses her gratitude to Johnson, writing “Thank you QUEEN #KatherineJohnson for sharing your intelligence, poise, grace and beauty with the world! Because of your hard work little girls EVERYWHERE can dream as big as the MOON!!! Your legacy will live on FOREVER AND EVER!!!”

Henson’s celebratory post serves as a reminder to us that the loss of a great mind such as Johnson is not a tragedy we should lament on, but a celebration of a long life well-spent and a legacy as the catalyst to some of the most important advancements of technology and mathematics in the history of America. Katherine Johnson is no longer a hidden figure, but an iconic name that will live on in history.