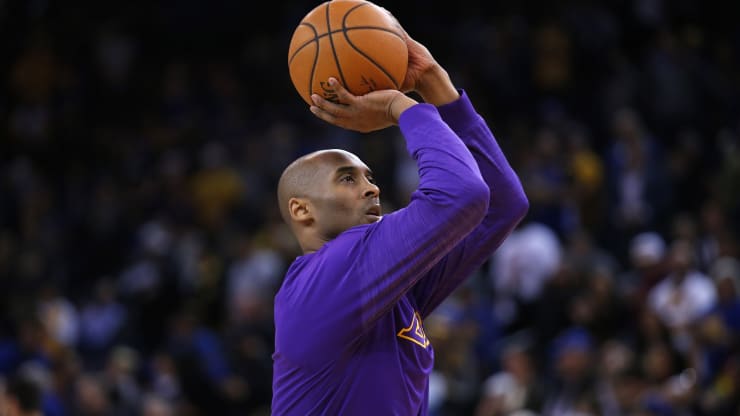 Mamba Out: The Legend of Kobe “Bean” Bryant

The 1996 NBA draft, considerably one of the most talented and decorated classes in the history of the professional basketball league, held in East Rutherford, New Jersey, on June 26, marked a special day for NBA prospects.

In the 50th draft, of the National Basketball Association, notable college basketball stars, high school ballers and a slew of other first-time eligible basketball players gathered in a room hoping to secure a spot on one of the 29 rosters, and hear their name called by late NBA Commissioner, David Stern. The star-studded draft class featured Georgetown University basketball standout Allen Iverson, Ray Allen, Steve Nash, Jermaine O’Neal and Kobe Bryant. With a draft class full of so much talent analysts and fans questioned which prospect would be selected first, and moments later with the No.1 overall pick, the Philadelphia 76er fans received their answer—nicknamed “the Answer”— with combo-guard Allen Iverson.

“With the 13th pick in the 1996 NBA draft, the Charlotte Hornets select Kobe Bryant from Lower Merion High School in Pennsylvania,” announced Stern.

Following the announcement, Hornets’ affiliates in attendance cheered along with fans in support of their team’s selection. In the next 60 seconds, Bryant—who was a confident high school standout—would then embrace and hug his family, wave to the crowd and proudly put on a Charlotte Hornets fitted cap.

However, before the night was over, the 6-foot-6 shooting guard was traded to the Los Angeles Lakers for center Vlade Divac.

Kobe Bryant, then described as a 6-foot-6 prolific scorer, with superb ball-handling, versatility and unmatchable determination would go on to give the Los Angeles Lakers and the world of basketball their answer for 20 seasons on and off the court.

Sadly, that came to an abrupt end Sunday when the 41-year-old Los Angeles Lakers great and his 13-year-old daughter, Gianna, among seven others died in a helicopter crash in Calabasas, California, Jan. 26.

The group was scheduled to travel to Thousand Oaks, where Kobe was prepared to coach Gianna and other girls on her travel basketball team, the Lady Mambas, at Kobe’s Mamba Sports Academy.

According to a watch commander for the Los Angeles County Sheriff’s Department, the pilot of Kobe’s private helicopter was attempting to fly under low visibility flight rules through foggy weather conditions. CNN reports the pilot asked Burbank Air Traffic Control if he could fly under these special air conditions. Following his request, the pilot climbed to a higher altitude to avoid cloud layers, but moments later, the helicopter began dropping 2,000 feet per minute and crashed. The pilot and none of the passengers survived.

Bryant was born on Aug. 23, 1978, in Philadelphia, Pennsylvania, unto a basketball family. Joe “JellyBean” Bryant, Bryant’s father, played for the La Salle University Explorers from 1973 to 1975. In 1975, similar to his son, he was drafted in the first round of the NBA draft by the Golden State Warriors and traded to the Philadelphia 76ers where he would play for four years, until playing for the San Diego Clippers and the Houston Rockets. Kobe’s aunt, Chubby Cox, who was the sister of his mother Pamela Bryant, also played basketball at Villanova University.

Following his father’s career in the NBA and overseas, after spending most of his childhood in Italy with his father, Kobe returned to the United States to play basketball at Lower Merion High School in Philadelphia—his family’s basketball stomping grounds.

After three years of playing at Lower Merion, Kobe played all five positions—leading his high school to a state championship in his senior year.

Although he was heavily recruited by collegiate basketball powerhouses such as Villanova University, Duke University and the University of Michigan University, 17-year-old Kobe decided to enter the NBA draft, where he would later become basketball royalty.

In Bryant’s first NBA season, he only started six games and played a minor role with the team—averaging only 15.5 minutes per game. However, during 1997’s All-Star weekend, he was invited to the All-Rookie team and won the Slam Dunk Competition, resembling the great Michael Jordan in style. Soon Kobe would carve his legacy and style throughout the league, having other players pay homage to him.

In 2007, Bryant was named to the USA Men’s Senior National Team and USA FIBA Americas Championship Team that won all 10 of their contests. The team won gold, qualifying them for the 2008 Olympics.

On June 23, 2008, Kobe was selected to join the USA Men’s Senior National Team for the 2008 Summer Olympics, where he would play in the Olympics for the first time. With Bryant’s 20 points, six assists and clutch 13 points coming in the fourth quarter, Team USA won the gold medal. They defeated Spain 118–107 for Team USA’s first win since the 2000 Olympics.

Without the help of Shaquille O’Neal, many doubters thought Kobe’s winning days were over. Still, with his mamba mentality, he continued to thrive in the league, carrying the Lakers to two more championship titles in the 2008-2009 and 2009-2010 seasons.

In his final seasons, a series of injuries, including a torn Achilles, hindered Kobe, but when he appeared on the court, he competed despite the scoreboard or his team’s win-loss record. His mamba mentality and heart remained consistent over the years.

Following his playing days, Kobe continued his success off the court. In 2018, he won an Academy Award for Best Animated Short for “Dear Basketball,” a movie he wrote and produced. In the same year, he launched Granity Studios, a multimedia company founded to create motivational content for the youth, along with the Mamba Sports Foundation, to improve youth performance in sports.

His untimely death has shocked the basketball world and fans across the globe, but his legacy shall continue.

“The NBA family is devastated by the tragic passing of Kobe Bryant and his daughter, Gianna. For 20 seasons, Kobe showed us what is possible when remarkable talent blends with an absolute devotion to winning,” said NBA Commissioner Adam Silver in a statement. “But he will be remembered most for inspiring people around the world to pick up a basketball and compete to the very best of their ability. He was generous with the wisdom he acquired and saw it as his mission to share it with future generations of players, taking particular delight in passing down his love of the game to Gianna “, Silver’s statement continued.

Bryant’s untimely death may still leave the world uneasy for days or years to come, but his legacy, teachings and mamba mentality will live on. The “Black Mamba” may be out, but his presence throughout NBA history is eternal.