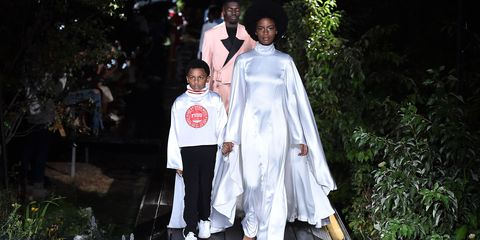 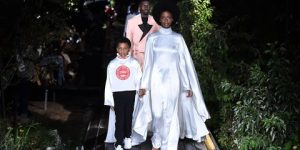 When analyzing Kerby Jean-Raymond’s contributions to fashion and streetwear design for Pyer Moss, we have to acknowledge the messages, political and cultural, included in his work for Pyer Moss’ Spring-Summer RTW 2019 collection. He didn’t leave it to the designs to speak for themselves but instead used the entire production to create a chilling experience for his latest NYFW show. Here are a few ways Pyer Moss’ recent designs paid reverence to black life, black history, and black culture with its latest SS RTW collection:

The Portrayal of the Black Family

On multiple menswear and womenswear pieces, we see members of black families. On one, two black children are dressed for what appears to be Easter Sunday.  Multiple garments have portraits of black women printed across them. Another piece includes a gown embellished with Swarovski crystals, depicting a father holding his infant child. Ten of these portraits featured across the garments are original works done by artist Derrick Adams, known for his mixed media paper collages and acrylic based paintings of black people and culture.

The History of Weeksville

Jean-Raymond presented the show in Brooklyn at the Weeksville Heritage Center. What is now known as Crown Heights in Brooklyn is what used to be known as Weeksville, a neighborhood founded by James Weeks in 1838. It was one of the country’s first black communities made of freedmen; slavery had just been abolished 11 years prior.

To seal the whole production together, an all-black choir dressed in white sang throughout the show. Singing out Stevie Wonder’s “Heaven Is 10 Zillion Light Years Away”, Roberta Flack and Donny Hathaway’s “Be Real Black for Me” and a gospel version of Fast Life Yungstaz’s “Swag Surf” to be the highlight of it all.

A recurring element throughout the collection was the FUBU reference. Not only did this pay respect to the legendary brand, but humbly recognized one of the first brands that made streetwear more fashionable to the mainstream in the past and contemporary. While many black influencers and trendsetters alike are waiting for these references to be seen again from black creatives such as Off – White’s CEO Virgil Abloh, or Kanye when developing the next phase of YEEZY Season clothing, Kerby Jean-Raymond is already ahead of the game.