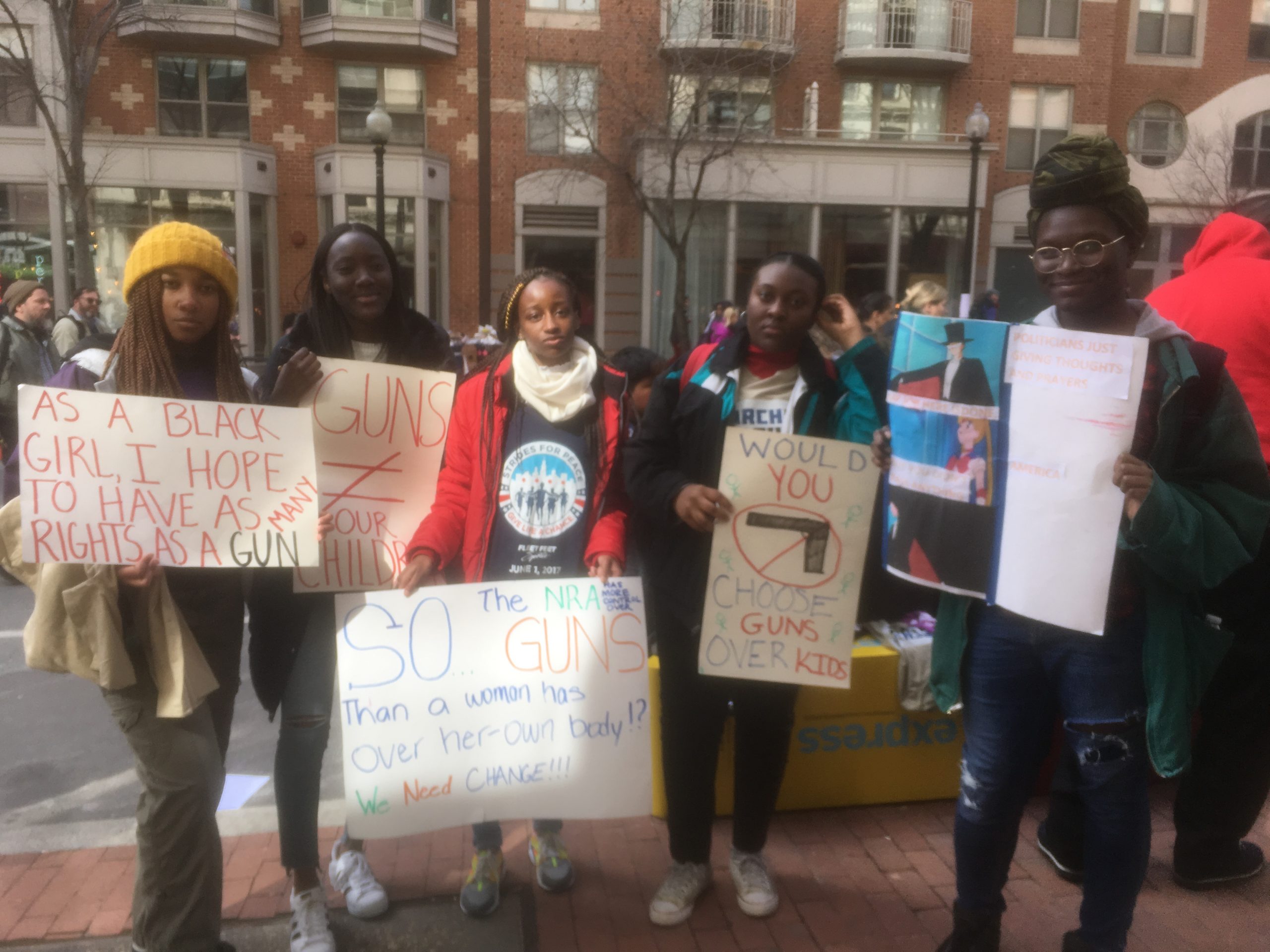 #MarchForOurLives, But Whose Lives? Exploring the Lack of Intersectionality in the Movements for Gun Control

On Saturday, March 24, an estimated 200,000 protesters walked in solidarity to support stricter gun control policies along the streets of Capitol Hill. With over 800 sister marches worldwide, March for Our Lives signified the largest protest against gun violence since 2000 and connected millions through the use of hashtags like #MarchForOurLives and #NeverAgain.

Celebrities, performers and speakers represented different backgrounds and demographics, lending March for Our Lives the illusion of intersectionality while supporting one common goal: ending gun violence. Actress and singer Jennifer Hudson closed the march with a cover of Bob Dylan’s The Times They Are-A Changin’. In addition to being one of the celebrity appearances at the march, Hudson lost her mother, brother and aunt to gun violence.

Eleven-year-old Naomi Wadler sparked tears when she gave a touching speech on the overlooked gun violence that affects African American women and other women of color. Yolanda King, granddaughter of Rev. Martin Luther King, Jr., had also lost her beloved grandfather to gun violence. Edna Chavez, a resident of South Los Angeles, had the crowd chanting her late brother’s name while talking about the prevalence of gun violence in her neighborhood.

David Hogg, Emma Gonzalez and other survivors of the recent Marjory Stoneman Douglas High School shooting, where a former student killed 17 and injured many in Parkland, Florida. Current students spoke about their experiences since the massacre. They also noted their agenda moving forward, which includes implementing stricter background checks and banning the sale of assault weapons and high-capacity magazines, according to the official March for Our Lives petition.

However, while acknowledging the various backgrounds at the march, one question remains: Why weren’t Black people and other communities of color supported with this much unanimity when they were vehemently fighting against gun violence?

Gun violence is an issue that weighs especially heavy on communities of color. According to a 2017 study published in the Journal of Pediatrics on childhood firearm injuries, it was found that “African American children have the highest rates of firearm mortality overall (4.1 per 100,000),” which is “10 times higher than the rate for white children and Asian American children (each 0.4 per 100,000).” With African Americans being disproportionately murdered at the hands of gun violence for decades and politicians ignoring their calls for action, it is inevitable that groups will rise up and protest to ensure that their grievances are heard. However, when members of the #BlackLivesMatter movement chant, yell and actively participate in civil disobedience, they are arrested. They are looked at as radical and unfitting for society. Their cause is labeled unlawful and unimportant to the majority. They are deemed a threat.

“I believe #NeverAgain is strictly about gun control regarding school shootings, but more people of color die from police brutality, and I do not think much was said about that during the march,” said Abolade Oyetunji, a freshman political science major at Howard University.

When the same issue of gun violence affects America’s white majority, there is outcry. There is acceptance of their pain and their refusal to comply with the laws enacted. There is a movement that is not stopped by law enforcement at every corner. There is compassion and empathy at every turn.

Denay Malloy, a 17-year-old Maryland resident and participant in March for Our Lives, stood in solidarity for the cause but felt the protest was “not as intersectional as it could be.” “I’m not trying [to] discredit David Hogg and many of the other people from the Parkland shooting because they have extreme trauma and I stand with them,” said Malloy.

“However, it’s not a Parkland debate. It’s a national debate, spreading through generations that the black community, and the brown community and the immigrant community have been speaking about.

“So why does it take fair-skinned people, white people, to now experience some pain that we’re feeling, that we’ve been experiencing for years, for us to move like this?”

Grace Ajisafe, another Maryland resident, agreed the #NeverAgain Movement should be more inclusive of people of color. “It’s important to represent the whole nation, not just one part of the nation, as in white people,” said 17-year-old Ajisafe. “I think that the only way to in-
crease the intersectionality is for media to cover more people of color involved in the movement, to show that we are here, and people who support Black Lives Matter are here.”

The “Hands Up, Don’t Shoot!” slogan -birthed after the killing of Michael Brown in 2014- is now being used by white protesters of this movement who, ironically, were the ones that once disapproved of its usage as the rallying call of the Black Lives Matter Movement. The appropriation of the phrase exhibits that some members of the #NeverAgain Movement are intentionally ignoring the intersecting goals of #BlackLivesMatter. This is yet again another example of society picking and choosing which voices they want to uplift and which voices they want to oppress.

The survivors of the Douglas massacre who are leading the #NeverAgain movement acknowledged the lack of inclusivity. Students such as Hogg and Cameron Kasky discussed how their privilege has worked to their advantage with media coverage but admitted their black classmates have not had the same opportunity. At an Axios event, Hogg stated the biggest mistake the media has done while covering the Douglas shooting is “not giving black students a voice,” according to a Newsweek article.

“My school is about 25 percent black, but the way we’re covered doesn’t reflect that.” During a Twitter Q&A, Kasky stated, “We’re an affluent community -that’s why initially everybody followed this [shooting] so closely,” according to a Blavity article. “We have to represent those who unfortunately were ignored. This is not just about us. … When we’re together marching, this is not going to be different races, different generations – this is going to be a unified people standing together against those who are trying to ignore us,” said Kasky. Therefore, it is up to the members of the movement to move forward with the intersecting goals of #NeverAgain and #BlackLivesMatter.