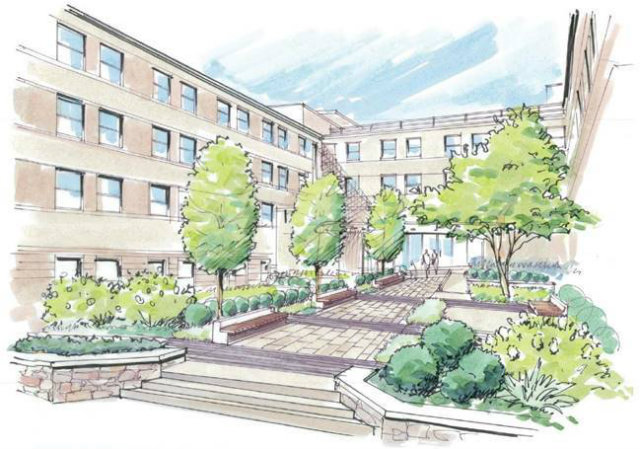 Amid Upcoming Quad Renovations: Is There A Housing Crisis in the Making?

The conditions in the Harriet Tubman Quadrangle, even in the second semester, are still being described by residents as “terrible.” Tensions mount as many in the dorm continue not to have hot water in their showers, nor working heaters, washers or dryers. Some floors have had brown-colored water for a few days upon returning and some rooms had pipes burst, flooding the room and displacing the residents.

These conditions are not new to those in the Quadrangle, but they are new to many of the buildings on campus. Many residents remain affected as Howard University continues to deal with the effect of the cold on its aging infrastructure.

At a Jan. 11 Town Hall specifically speaking on how the weather affected facilities, administrators from Resident Life and Student Affairs faced tough questions, such as, “Why weren’t refund checks disbursed on time?”  and, “Will students living in the Quad be reimbursed for poor living conditions?” To the first question, they blamed the computer system going down, to the other they said, maybe. Reimbursement will be decided on a case-by-case basis.

It was at this Town Hall that the plans for the Quadrangle’s renovations were announced.  The Harriet Tubman Quadrangle will be closing starting in the Fall 2018, Executive Vice President and COO Dr. Tashni Dubroy stated in an official Howard communications email.

“The long-term plan is to close the quad in Fall 2018 for a total renovation. Students will be fully engaged in this process, mirroring the forums conducted when renovating the West Towers,”  said Dubroy.

Incoming freshman women will stay at Bethune Annex and College Hall North. CHN is normally freshman housing, but Bethune Annex is one of the four dorms that would have been available to sophomore and upper-class students next semester, along with the newly opened East Towers.

Since incoming freshmen will be in the Annex, Paulette Porter, Resident Life Housing/Procurement Specialist, said that the classes are expected to shift. She assumed the freshmen currently in the Quad will go to CHS or the West Towers next semester.  However, she was questioned further about the enormous size of the Class of 2021, where freshmen girls are not only in triples and quads in the Quadrangle and College Hall North, but also in triples in Bethune Annex and College Hall South. Even accounting for Howard’s retention rates, this incoming freshman class still looks to be one of the largest classes in Howard’s history.

Many upperclassmen were already forced off campus due to this class’s enormous size and even some freshmen have been forced to live off campus as far as Maryland.  Howard also currently faces criticism for its leasing of two former dorms, Slowe Hall and Carver Hall, which are to be made into luxury, multifamily apartments, according to Urban Investing Partners, the company Howard is collaborating with. Now, with the Quadrangle closing temporarily, it appears on-campus housing will decrease to even smaller numbers.  Howard’s current housing policy places freshmen first so upperclassmen housing is not even a priority. Porter seemed surprised when asked directly how many upperclassmen could be housed on campus next semester; she also seemed surprised and unsure when asked what exactly the renovations for Harriet Tubman Quadrangle would entail.

Student President of the Quadrangle, Zephaniah Galloway, said she also had little knowledge of the renovations, only that which Dean Wilson Bland of Resident Life had told her.  Galloway said that Bland had been doing all he could for the Quad residents, but a lot of the repairs needed could only be done when the Quad is officially closed. When asked about plans for current Quadrangle residents, Galloway admitted to being a little disappointed with what the Quad council could do for residents, urging current residents to continue to put in work orders about issues. She said the Quad council was doing all it could to boost morale.

Bland said that “the Quadrangle is getting its own individualized boiler to ensure that there is always heat and hot water as well as ensuring that all the air conditioning and heaters work,” something that was supposed to be completed during the summer renovations.

Vice President of Communications Crystal Brown said that currently the plans for the Quadrangle are still in the early stages and whether or not housing would be affected by the Quadrangle closing remains to be seen.

“We are excited about the phased renovation of the Quad, which will begin next Fall.” said Brown, “Accordingly, students will be offered a variety of housing choices, including the newly renovated East Towers, scheduled for completion by the beginning of next semester.”