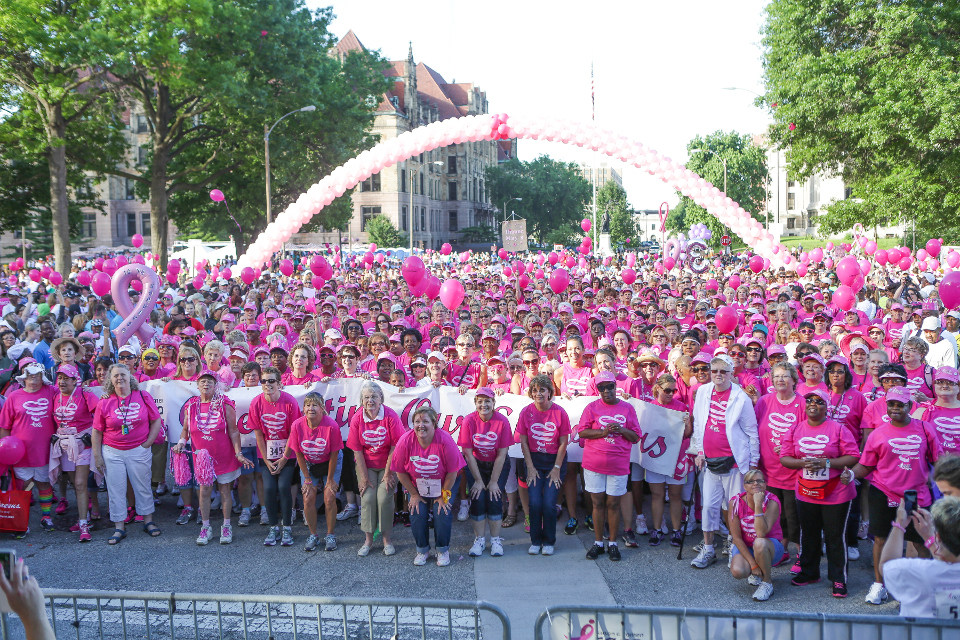 WASHINGTON – A sea of pink and white filled Pennsylvania Avenue in Downtown D.C. as men and women gathered to raise funds for breast cancer research. On Sept. 9, in addition to raising funds, thousands participated in the Race for the Cure 5K event to support breast cancer survivors and to remember those who have passed.

“I lost my aunt to breast cancer in year 2009. Ever since then I started walking in these events,” stated event-goer Michael Linder. “I am an advocate of breast cancer [awareness] and try to be involved with anything that is related to breast cancer.”

Susan G. Komen is an international organization that hosts annual Race for the Cure events in multiple cities throughout the country to fundraise and to educate for breast cancer. The organization was founded in 1982 by Nancy G. Brinker who promised her sister Susan, before she passed away, that she would do everything she could to end breast cancer.

The Susan G. Komen Race for the Cure is now the largest non-profit organization fighting to end breast cancer on multiple platforms. Seventy-five percent of the proceeds that are poured into communities to fund breast health programs, while the remaining 25 percent is invested in cancer research.

Since the organization’s inception, many have adopted the vision “a world without breast cancer” and have taken on the responsibility to see the advancement of research, education, screening and treatment.

Volunteer coordinator Sasha Lee has been with the organization for over three years. “Although there are times I wake up at 3 a.m. and I work long hours, it’s all worth it,” said Lee, holding back tears. “The energy I feel here makes it worth it.”

In addition, Kate Poole, a Maryland resident, joined the organization in May and feels great knowing that she is helping to fulfill the promise that Nancy made to her sister.

“I got involved because breast cancer is prevalent. One in eight women are diagnosed with cancer,” said Poole. “Because so many people are impacted, there should be a lot of support.”

Participants of all ages, whether they ran or walked, have all been personally affected by the life threatening disease, compelling them to partake in the Race for the Cure.

“Every year in D.C., since 2000, I have walked in the Race for the Cure event in hopes that a cure is found. I walk to support my daughter who was diagnosed with breast cancer and my friends that have both passed and survived,” active participant, Ms. McMillan said.

Fourteen-year-old volunteer Ayonnah Tinsley has joined the fight to defeat breast cancer. “I’ve been volunteering for three years,” said Tinsley. “This is my way of showing support because my mother’s friend was diagnosed with breast cancer.”

As participants reached the final stretch, they were met with motivation to keep going from those who finished early, like Dianna Webb.

Webb, a breast cancer survivor, joyously cheered on runners as they crossed the finish line.  “I have been a survivor for 18 years,” mentioned Webb. “I was diagnosed in 1998 and I have been walking in the Race for the Cure ever since.”

This year’s race raised over $727,000 and is steadily reaching its goal of $1.2 million. The Foundation plans to continue its mission of eliminating breast cancer by 2026. Donations can be made to the organization on its website http://www.info-komen.org.