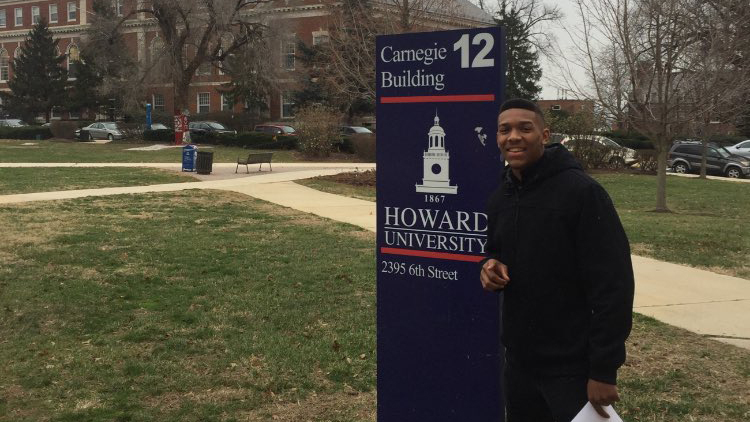 Getting to know the True Freshman QB

Washington, DC— After Howard University’s history making upset Saturday, Sept.2, against UNLV, Caylin Newton, the Bison’s true freshman quarterback has proved that he will be the one to lead the Mecca’s way back on the map.

Q: Howard University’s football team has not won a season opener since 2010 so beating UNLV was huge. How does it feel for you as a starting freshman quarterback?

A: It felt great. Right after the game it felt like we got the job done, and that’s all that mattered.

Q: How does it feel to make a name for yourself other than “Cam Newton’s little brother?”

A: It feels good. My whole life I’ve been called “Cam’s little brother” or “Little Cam,”and at a certain time in my life I found out that it’s my time now. I was okay with it at first, but then when I started in rec[recreation] ball and high school I realized that I didn’t want to be called that anymore.

Q: According to the media, you shared that “Howard is not a football program yet but it will be.” What does that mean to you?

A: To me I feel that words are powerful, and I feel like you should speak things into existence if you really care about it. Like a quote Muhammad Ali said, “I told myself that I’d be great even before I knew I was.”

Q: You guys were given a prediction of a 1.2% win against UNLV. How was it like overcoming the odds?

A: It was awesome. My body didn’t feel too good, but my soul did so That’s all that mattered.

Q: Having three touchdowns is not the everyday freshman play. So how was the atmosphere, the crowd, the team, pretty much everything that night?

A: Well I thought about what my Coach Marion, my OC told me. He said “you don’t have time to be a freshman,” and that’s what he told me back in the Spring. Ever since that day I just told myself that nobody is going to feel sorry for me, so I had to step up. I couldn’t step the field if I didn’t think we were going to win or if I didn’t believe.

Q: Aside football many people want to get to know you personally, so what is one of your favorite pre-game songs to listen to?

Q: What is your favorite locker room moment?

A: There’s been so many, but like they say in Vegas, what happens in Vegas, stays in Vegas.

What happens in Vegas does indeed stay in Vegas, unless it’s an historic upset of UNLV. Caylin Newton has been a great leader of the football team this year and looks  to continue to embody Howard’s slogan: Mission Possible.