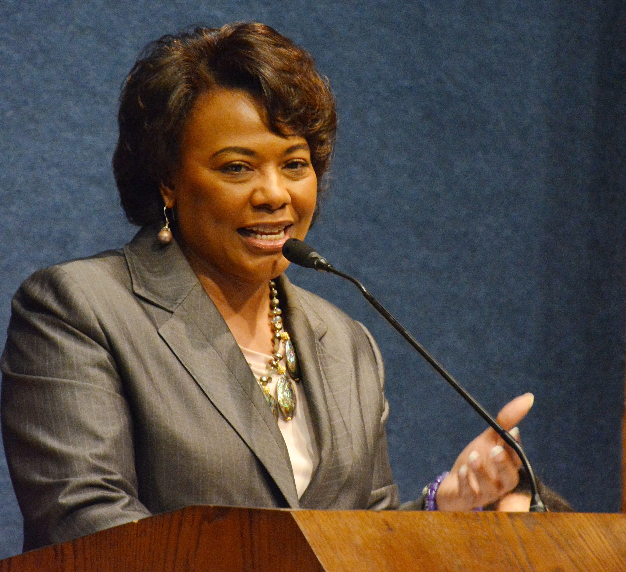 In celebration of the last day of National Women’s History Month, as well as the 190th anniversary of the Black Press, Trice Edney Communications hosted its seventh annual Stateswomen for Justice Luncheon, message to America, panel discussion and public forum on Friday, March 31, at the National Press Club Ballroom in Washington, D.C. The luncheon was free of charge and both women and men were in attendance.

Dr. Bernice A. King, daughter of the late Rev. Dr. Martin Luther King, Jr. and CEO of the King Center in Atlanta, gave the keynote address and “message to America.” Professor Yanick Rice-Lamb, journalist, author, and chair of the Department of Media, Journalism, and Film of the Cathy Hughes School of Communications at Howard University, served as moderator for the discussion.

In response to the question during the public forum about the devastatingly low alumni donation rate amongst most HBCUs, Barnes, who is also a Howard University alumna, shared her disappointment that though most historically black colleges and universities (HBCUs) were founded by black churches and religious institutions, they are not currently the leading voice in convincing their congregation and the black community to give directly to these schools. She mentioned that when Morris Brown College in Atlanta lost their accreditation in 2003 and was in jeopardy of closing permanently, her church had not urged a call to action to save the school.

Dr. Malveaux, an economist, remarked, “Alumni are your hardest nut to crack. They are micro-managers who want to know what you did with every penny. If you really have a challenge, designate the money for scholarships. But don’t not give…If you don’t give back, shame on you!”
Rice-Lamb gave insight on how sponsoring corporations and foundations determine the amount to contribute to HBCUs.

“They’re looking at the percentages and the numbers of people who give. So, even if it’s a low amount, when we have people doing it, it helps,” Rice-Lamb said.
Hazel Trice Edney, CEO of Trice Edney Communications and host of the luncheon, left the guests with a word of wisdom to “make sure that you are supporting those five prongs of the Black community: The Black church, the Black press, the Black business and economic community, the civil rights community and organizations, and the HBCUs. They are those prongs that stand with us.”