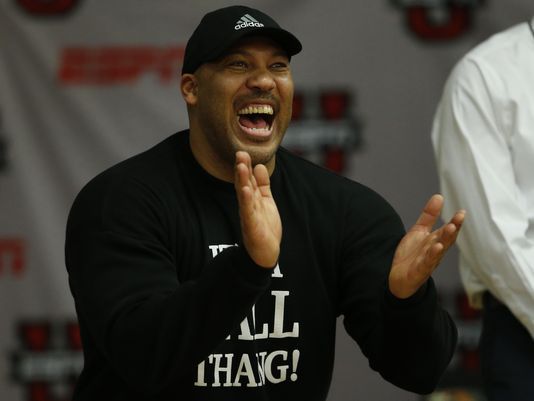 LaVar Ball vs. the World

These were LaVar Ball’s famous words on “First Take,” the morning of Thursday, March 23, when describing his one-on-one record in basketball. He told USA Today Sports that back in his say, he’d “kill Michael Jordan one-on-one.”

Before playing professional American football, Ball played basketball at Washington State, averaging two points per game, and California State-Los Angeles, where he was an All-Conference player.

His most infamous comment so far came during a March 10 podcast where he predicted that Cleveland Cavaliers Lebron James’ children would have a harder time getting into the NBA because of their father’s legacy and the family always being in the spotlight. This is compared to his children who are not in the spotlight as much and can focus more on their game.

To this, James warned Ball to “keep my kids’ names out your mouth.”

Ball’s recent comments, which have all landed him in the spotlight, are often rooted in his support and dreams for his three sons Lonzo, LiAngelo, LaMelo.

Lonzo plays for the UCLA Bruins, while LiAngelo and LaMelo both play for Chino Hills High School. All three have proven to be athletically gifted.

LaMelo dropped 92 points in one of his games, while Lonzo is preparing to enter the NBA, as he told reporters after his March Madness loss to Kentucky.

With his children making headlines during this basketball season, Ball’s comments are asserting that their family name will remain in the headlines.

It can be argued that what LaVar is doing is in fact hurting his children’s uprising, as the media is focusing more on the family drama surrounding senior Ball’s comments than the basketball skills of his son.

Ball was quoted on “First Take” saying that with his son’s fame the family would be the first to sign a billion dollar shoe deal.

While much of what he has said can be debated or confidently dismissed, what cannot be debated is his kid’s success, giving him, what seems to be, the fuel for his comments.

“I have the utmost confidence in my boys,” Ball said. “I have always been this way, and I always will be this way.”

The younger Balls have already committed to UCLA to play basketball following their graduation.