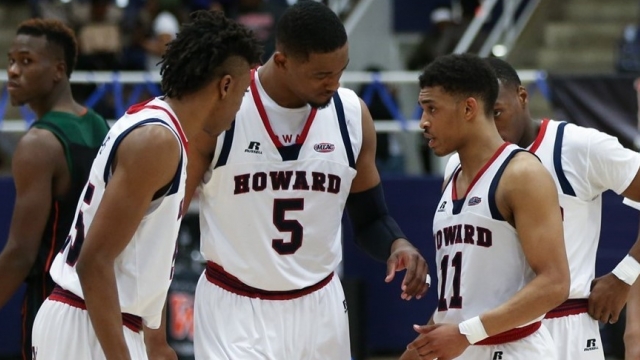 Howard Bison Men’s Basketball: The Road from Defeat to Victory

Michael Phelps once said, “It’s not how you start, but it’s how you finish.” And for the men’s basketball team, this statement reflects the duration of their season.

The Howard Bison basketball team had a season of some ups and a heavy load of downs. Having suffered tough injuries, enduring personal loss and losing a significant number of games, the men keep pushing.

Having won their senior night game against University of Maryland Eastern Shore, the Howard Bison traveled to Delaware to play the Delaware State Hornets hoping to close out their regular season a victory. However, despite having played a tough game with Solomon Mangham scoring a team-high 18 points and James Miller scoring 16, the Bison fell short by 10 points. The results of the game brought the Bison to a 7-22, 5-11 in the MEAC record, while the Hornets stood 10-21, 7-9 in the MEAC.

The downfall for the Bison can be contributed to them not getting as many rebounds as the Hornets and the MEAC Rookie of the Year, Charles “CJ” Williams, struggling to put any points on the board, finishing with four points.

“He waited until the last game of the season to have his worst game,” head coach Kevin Nickelberry said in an interview with HU Bison Sports. “I hope that he has gotten it out of his system and not carry over to the tournament.”

Despite playing his “worst game,” Williams finished the season having been ranked in the top 10 scorers within the MEAC, shooting 78 percent of his free throws. He was named Rookie of the Week seven times throughout the season. He finished the regular season with an average of 15.7 points per game.

As for Coach Nickelberry, Williams fulfilled his hope come Monday, March 6, when the Bison faced Coppin State in the first round of the MEAC tournament in Norfolk.

In the first half of the game, Mangham and Damon Collins led the teams offensively. However, the Bison returned from halftime ready to fight for a victory, and they did just that.  The Bison had a 13-6 run coming out of the locker room, giving them a 46-28 lead. Miller and Williams were the sole scorers during the run.

However, foul trouble came upon the Bison, giving the Eagles a fighting chance. Taking advantage of some of the Bison’s leading scorers being benched, the Eagles (8-24) ran a 27-17 comeback, bringing the score to 69-63.

It was a three-pointer from Williams that brought the Bison back to a nine-point lead and kept the momentum going, changing the game.

The Bison defeated the Eagles with a 79-73 victory.

Williams finished with 15 points, while Mangham, Miller, Damon Collins and Tyler Stone finished with  18, 13, 13, and 7 respectively.

“We have been playing our best basketball over the past seven games, and we have never lost focus of our goal and that is to win the championship,” Coach Nickelberry said in an interview with HU Bison Sports. “Tonight was one step.”

The men will face the No. 3 seed Morgan State Bears in Thursday’s quarterfinal.

Update: The Bison defeated the Bears 68-65 in Thursday’s game. However, they lost to Norfolk State in the next round, 53-68.