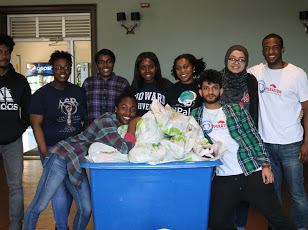 Howard University students have taken it upon themselves to help the homeless population in D.C. with the Protect Our Homeless Initiative — just one of the projects of Operation Help the People. Imazul Qadir, a sophomore biology major from Chicago, Ill., and several members of OHTP volunteered at three different shelters across the district to distribute over 200 care packages and warm meals to the disenfranchised living in the city.

Operation Help the People is a philanthropic undertaking started by Howard student Caleb Jackson in 2014. The project was initially started as a one-time summer mission to help the impoverished with meals and care packages. However, after the overwhelming turnout of volunteers that summer, OHTP evolved into a full blown organization.

In a statement, Qadir wrote that “D.C. has one of the biggest homeless populations in the nation, and it’s kind of ironic because Washington D.C. is one of the most powerful cities in the world. Even though we have a lot of resources that the city offers these people, a lot of them are unable to take advantage of them, either because they don’t know or because they can’t get access to them for some other reason.”

Through the Protect Our Homeless DC initiative, carried out on Saturday, Feb. 18, OHTP went to the Community Center for Creative Nonviolence, the Harriet Tubman Women’s Shelter and the Nativity Shelter for Women. Approximately 40 volunteers showed out in total according to Imazul Qadir, who also serves as vice president and coordinator of U.S. operations for the organization.

In addition to handing out care packages, Qadir stated another goal of the project was to make tangible connections with those in need of assistance and to help them in the form of counseling and guidance as well.

“Our intention with this project was not to just distribute the meals and the care packages, but it was to get our volunteers to interact with these people we’re trying to help,” said Qadir. “This is a very small first time project in the U.S., but we want to know how we can come back stronger and what other ways there are that we can help these people.”

OHTP’s philanthropic efforts are not simply limited to Washington D.C. either. The organization does a lot of charity work in Jamaica such as throwing back to school drives, where school supplies necessary for the education of students in Jamaica are collected, along with school beautification projects, where aesthetic changes were made to Jamaican schoolhouses.
The District had a recorded homeless population of about 12,000 as of 2015, as reported by the Washington Post. This number saw a 14 percent increase in 2016, according to the U.S. Department of Housing and Urban Development.

OHTP asks that Howard students sign up and volunteer to help the homeless, as well as spread awareness about the increasing homeless population in their own circles and community groups across the nation so more people will volunteer their time and resources to helping the homeless.