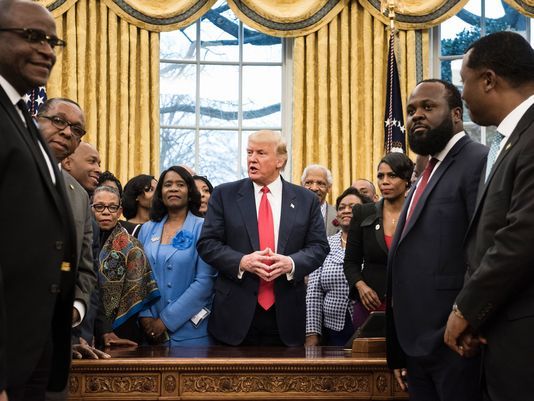 COLUMN: Thanks for Nothing, Donald

This one is personal.

On Tuesday, Feb. 28, President Donald Trump, flanked by a room of HBCU presidents and advisors, signed an executive order that did absolutely nothing. Or next to nothing. The “White House Initiative to Promote Excellence and Innovation at Historically Black Colleges and Universities” is yet another farcical and exploitative display from Trump, an opportunity for him to again use Black people as political props to silence criticism.

But you knew that. Just about all of his actions can be put into two categories: The blatantly racist/sexist/homophobic/corrupt stuff, like his and his advisors’ near-treasonous collusion with Russia during the election, the Muslim ban, the rollback of President Obama-era protections on transgender people’s rights. Then there’s the other camp: The politically unctuous and morally bankrupt stuff, the moves that he hopes will put him in league with other politicos looking to garner favor. This move falls into the latter, but in many ways that makes it much more nefarious.

Let’s be clear here: This HBCU executive order doesn’t change the funding mechanisms that power HBCUs, including Howard University. Congress is still the only governmental body that can radically alter HBCU funding, and Congressional gridlock on the budget pretty much guarantees that HBCU funding will not get slashed in any meaningful way for the near future (at least until one party gets a supermajority in Congress). The last change was actually an increase to $4.7 billion under Obama and his Democratic supermajority in 2010. This coincided with an executive order by President Obama that mandated that the HBCU Initiative, a Carter-era program that’s been extended under every subsequent president, “work with agencies, private-sector employers, educational associations, [and] philanthropic organizations” to increase opportunities for black students and graduates of HBCUs. The wording here is important. Why? Because Trump’s executive order says the exact same thing.

This is not a joke. Donald Trump’s executive order, like Melania Trump’s convention speech, is largely just a copy-paste job of Obama’s executive order on HBCUs that he signed in 2010. No new funding. No new partnerships. Nothing. The only change is that this initiative is being taken out of Secretary of Education Betsy DeVos’ Department of Education and being moved into the White House.

What does this mean? Essentially, Trump can now walk down the hall and talk to the executive director of the HBCU Initiative. Great for his poor stamina and small fingers (can’t dial the phone to call them, so…), but not really all that important for Black colleges.

But the true purpose behind Trump’s order is clear to anyone looking at it from the outside: Political pageantry. For an administration that’s been plagued by scandals and accusations of racism from the start, getting a nice photo with dozens of prominent, Black leaders is a surefire way to fight off claims of racism. It’s the perfect cover for his supporters who, despite evidence to the contrary, truly believe him to be a magnanimous and noble person. “At least he did something for the blacks!” they’ll say, “Make America Great Again” cap placed firmly on their balding heads. Even as he does nothing, but re-sign an Obama-era policy.

Yet the true horror of this minstrel show is in the complicity awarded to Trump by Black leaders and directors of Historically Black Colleges and Universities. By showing up simply because Master Trump rang the bell, they’ve enabled his radically anti-Black agenda without uttering a single word.

Despite getting absolutely nothing in return, the presidents of Historically Black Colleges and Universities, including Howard President Wayne A.I. Frederick, have handed Trump a major, symbolic victory. Without demanding anything, they’ve given him a picture to put in campaign ads, a video to spur donations from Blacks who, rightfully, see the Democratic Party as nothing more than a front for lobbyists and corporatists. In essence, they’ve become that one Black friend that every white racist points out to exonerate themselves. And in doing so, they’ve made all of us Toby.

Shameful acts like this by the people, who are supposedly serving us, beg the question of just how horrible living on a Trump plantation would be, especially if our President is going to act like an overseer either way.