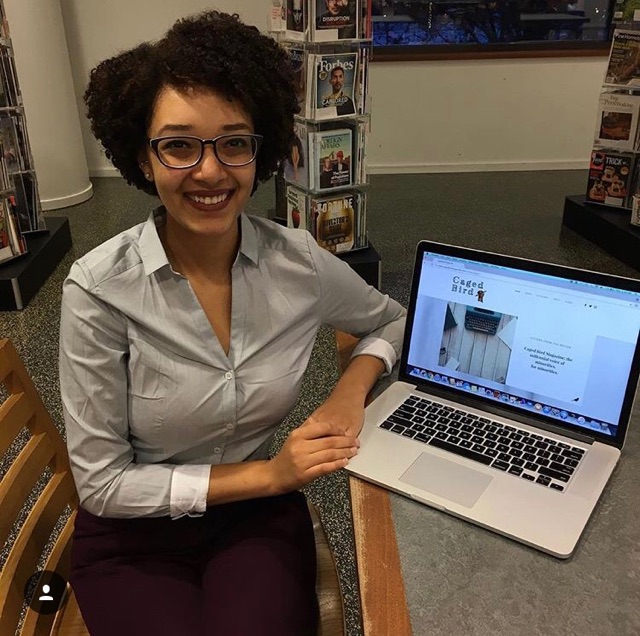 Alexa Lisitza, 21, is a junior english major, secondary education minor from Chicago who created a voice for minorities through her online writing publication, Caged Bird Magazine.

Lisitza started the magazine to represent the many different perspectives and views of minorities adding, “there is no single minority voice”.

“I created Caged Bird magazine to give a platform to minority millennials,” Lisitza says.

Although Caged Bird Magazine was an idea Lisitza developed over the summer of 2016, the magazine didn’t reach the public until this past November. Lisitza says that although minorities may be grouped together as people who share the same hardships, she aims to show the different views and different cultures they come from.

“Whenever minorities are a part of a magazine or anything editorial, they are either one of two or three minorities on the team, or they are automatically given the “Black” stories,” Lisitza says.

Lisitza keeps the perspective diverse by opening up the platform to writers from other colleges such as Spelman and Morehouse College. She reached out to these writers through people who had worked for her when she was the editor-in-chief of the Odyssey Online at Howard.

Along with that, Lisitza is also currently the co-editor of the Sterling Notes, which is Howard’s literary magazine, and a member of Sigma Tau Delta, an English fraternity. Outside of Howard she has had an internship with the Afro American newspaper, a Black newspaper in Washington D.C., and is currently a freelance writer for CapitallyDC.

Being an english major is one thing that has aided Lisitza with writing for her magazine. However, the location of Howard also helps Lisitza, due to the amount of publications here in Washington, and says she has more opportunities to work for major publications in comparison to her hometown Chicago.

In the future, not only will Caged Bird Magazine continue to give voices to minorities, they will also give back. Lisitza says that the platform will raise three $1,000 scholarships to be given out to students who write for Caged Bird Magazine. Lisitza will also hold events on campus such as a “black bloggers event” where bloggers will be able to meet with others, and help each other to improve the quality of their own blogs.

Lisitza’s goals for Caged Bird Magazine is to expand, and to be more than what it is now. “Right now we are article focused, but we are in the works of becoming more in order to tap into more interests,” she says.

“After graduating, I intend on going to grad school in New York,” Lisitza says. She chooses New York  due to the many major editorial positions there. In the future she also hopes to work for Codné Nast, a premier media company whose headquarters reside in New York.