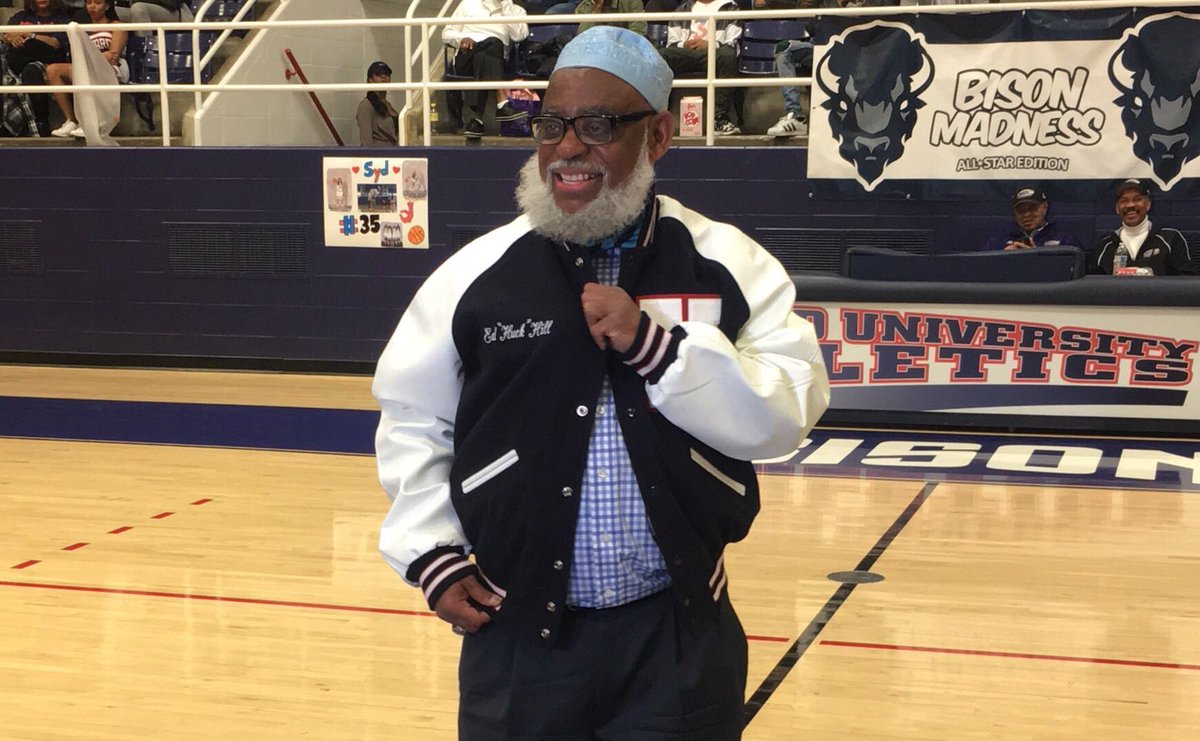 Burr Gymnasium was filled with students, faculty, staff and basketball players of the D.C. Warriors for the Men’s Basketball team’s “Senior Night” and final home game of the season, Monday, Feb. 27. Although halftime is typically graced by the Bisonettes, the band and the disk jockey of the night, Monday’s halftime was a little different.

Halftime belonged to the Sports Information Director, Mr. Edward “Ed” Hill Jr., who was celebrated for his 33 years of service at Howard University. The Warriors, who were present, along with Hill’s family, are products of the foundation that Hill co-founded.

After Hill’s career and service at Howard was acknowledged, Howard University Director of Athletics Kery Davis walked to half court for a presentation dedicated to Hill.

“We use the word legend a lot, but Ed Hill is someone who truly fits that description,” Davis said.

After Davis bestowed Hill with special gifts from students, teachers, friends and family, the crowd stood on their feet.

Hill paused, taking in the overwhelming joy that filled the arena. Then, he smiled before thanking everyone from his family to his students, and even former SID, Ricky Clemons, for bringing him to Howard.

It was plain to see that Hill’s effect on Howard and the D.C. community will always be special and untouched. During his time, Hill attained many accolades, but in an interview before the game, he claimed working with the students was his favorite part of the job.

“I’ve been blessed to have some outstanding students who have come into this office as work study students, interns, and volunteers — who have gone on to do some tremendous things,” Hill said. “There are a lot of things I could allude to, but the biggest joy is the students who I have been blessed to work with. To see them now working with the NFL, NBA, Major League Baseball, Nike, Under Armour or wherever else, that I’ve mentored and worked under me, that’s the biggest thing for me.”

Hill said his decision to retire stemmed from various factors.

“I came to the realization that it was definitely time,” he said. “It’s time because I’ve been in this business for 30 years and it’s changed tremendously. It’s time for me to move on and allow someone else to come in and take things to another level. There were several factors. I’ll be 67 on my birthday, and at some point in my life, where it was fun to travel to all these places and meet all these people, it became drudgery. You know you’re getting up early in the morning and flying some place and doing flight changes, getting to a hotel to go to the game — you know it goes on and on and on and it’s fun for a while, but after a while you want to get off the roller coaster.”

After he leaves Howard, Hill plans to write a book, teach some classes, and spend quality time with his family, specifically his grandchildren.

“I’m writing a book and it’s probably gonna chronicle my career in this profession and other things, like when I was a coach in the AAU basketball and growing up in D.C. and some other interesting topics,” Hill said. “I’m probably going to teach a class. I’m gonna spend more time with my grands,” he added, chuckling. “My seventh is on the way within three to four weeks. It’s a boy and we just had two girls back to back, so I’m excited about that. I’m taking them to the park and zoo and on family cruises and family retreats — those kinds of things. I can do that now.”

For Howard, finding a Sports Information Director replacement will be difficult, but necessary. When asked what advice he would give to the person that will attempt to fill his shoes, Hill paused.

Finishing his speech, standing before a completely full gym, Hill gave one final “HU!” and the crowd responded with an astounding “You Know!”