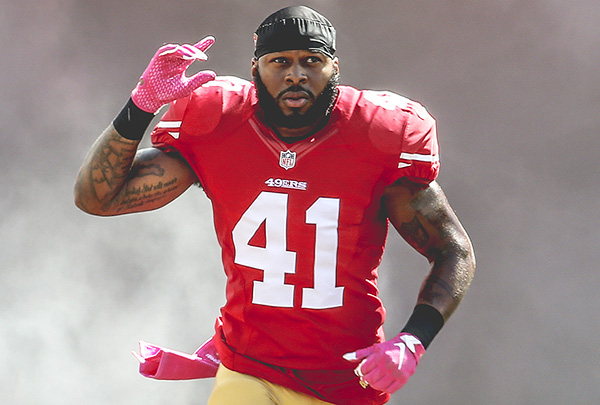 Bison Athletes Beyond College: Where are They Now?

In recent years, Howard’s athletics program has not been deemed to be the best of the best. However, in it’s 150 years of producing scholars, athletes and building a legacy, Howard has sent into the professional sports realm pure gems from the Mecca.

Antoine Bethea is a 32 year-old safety for the San Francisco 49ers. Bethea, who graduated from Howard in 2005, was originally drafted to the Indianapolis Colts as the 207th pick in the sixth round of the NFL draft. Bethea has seen great success in his NFL career, winning a Super Bowl ring during his rookie season and being selected to the Pro-Bowl three times spanning his time with the Colts and 49ers. He also has his own clothing line, “AB-41.” The proceeds of the line go to the Safe Coverage Foundation, which provides access and resources for student to achieve their dreams through higher education.

Bethea is married to Samantha Romantini with whom he shares two children.

Bubba Morton, or Wycliffe Morton, was a professional Baseball player for the Detroit Tigers (1961–1963), Milwaukee Braves (1963) and California Angels (1966–1969).  Playing right field, Morton was known for his cannon of an arm. However, he was also known for his surprisingly weak batting. While attending Howard in the mid 1950’s, he earned varsity letters in both baseball and football. Although his professional career wasn’t showered with personal accolades, he was the third Black player signed to the Tigers.  After his time in the MLB, and before he passed away in 2006, he went on to work for Boeing and was a retired Coast Guard reservist.

Jay Walker, who graduated from Howard in 1993 with a degree in political science, is now a member of the Maryland House of Delegates from District 26. Before his political career began, he was a professional quarterback in the NFL. Walker played his first year of college football at Long Beach State, transferring to Howard for his following three years of eligibility.  During his time on campus, Walker dominated as a quarterback, ultimately making him a suitable draft choice for the New England Patriots in the seventh round of the 1994 draft. While his professional career was much quieter than his time at Howard, completing two of his two attempted passes in the NFL, his life since has been anything but quiet. Now a legislator, he has been a part of the Maryland government for a decade. Not letting his experience as an athlete go to waste, Walker is also an ESPN college football analyst. Outside of professional work, Walker is the father of three children and married to his Howard sweetheart, Monique Anderson.

Larry Spriggs was a 6’7” small forward who played for 15 different basketball teams in the NBA’s minor league, the NBA and overseas. During his college years, Spriggs played his first two seasons of college basketball for San Jacinto, before coming to Howard to play for four years. After graduating in 1981, he was selected as the 81st overall pick by the Houston Rockets.  After bouncing around in the D-League and playing for the Chicago Bulls during the 1983 season, Sprigg finally found success, after being traded to the Los Angeles Lakers and winning the 1985 championship.  In the years since his retirement in 1996, Spriggs has led a relatively quiet life. Spriggs, 57, is currently an athletic trainer, specializing in basketball, working with kids on their way to high school and college.