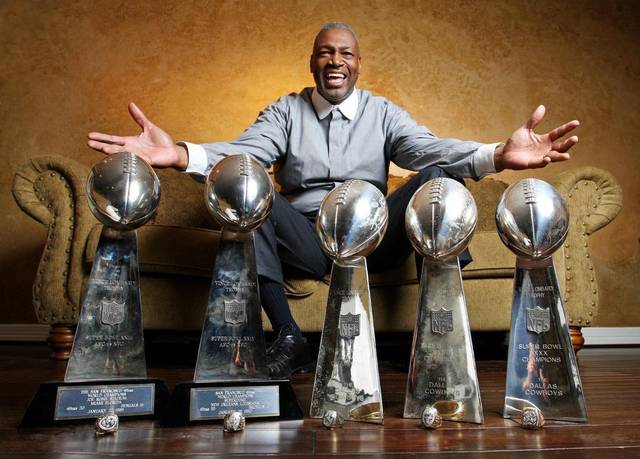 Who is Charles Haley?

What do Tom Brady and Charles Haley have in common? Five Super Bowl Championship rings.

Charles Haley was the first African-American NFL player to win five Super Bowl rings in the Super Bowl era. Haley was born on Jan. 6, 1964 in Gladys, Virginia. Upon graduating from high school, Haley attended James Madison University and was named a two-time All-American.

Haley would later be the 96th pick in the fourth round of the 1986 NFL Draft. He was drafted to the San Francisco 49ers. During his first years with the 49ers, Haley finished his rookie year with 12 sacks and was voted to the NFL’s all-rookie team. In 1990, Haley finished with 58 tackles, 9 passes defended, and was third in the league with 16 sacks.

Haley was voted the United Press International NFC Defensive Player of the Year and was a consensus All-Pro. His career with the 49ers ended in 1991, after leading the team in sacks every season and winning two Super Bowl Championships (XXIII and XXIV).

In 1992, Haley was picked up by the Dallas Cowboys, for a second round pick. While with the Cowboys, Haley accounted for 39 tackles, six sacks and 42 quarterback pressures, helping the team improve from 17th in total defense, in 1991, to first. Once again, Haley received the UPI NFC Defensive Player of the Year and was named an All-Pro.

Since retiring, Haley has served as the assistant defensive coach for the Detroit Lions’ 2001-2002 season. Haley currently serves as a special advisor, mentoring rookies for the Cowboys and 49ers. He also spends his time helping fund several local initiates with organization such as the Jubilee Center and the Salvation Army.