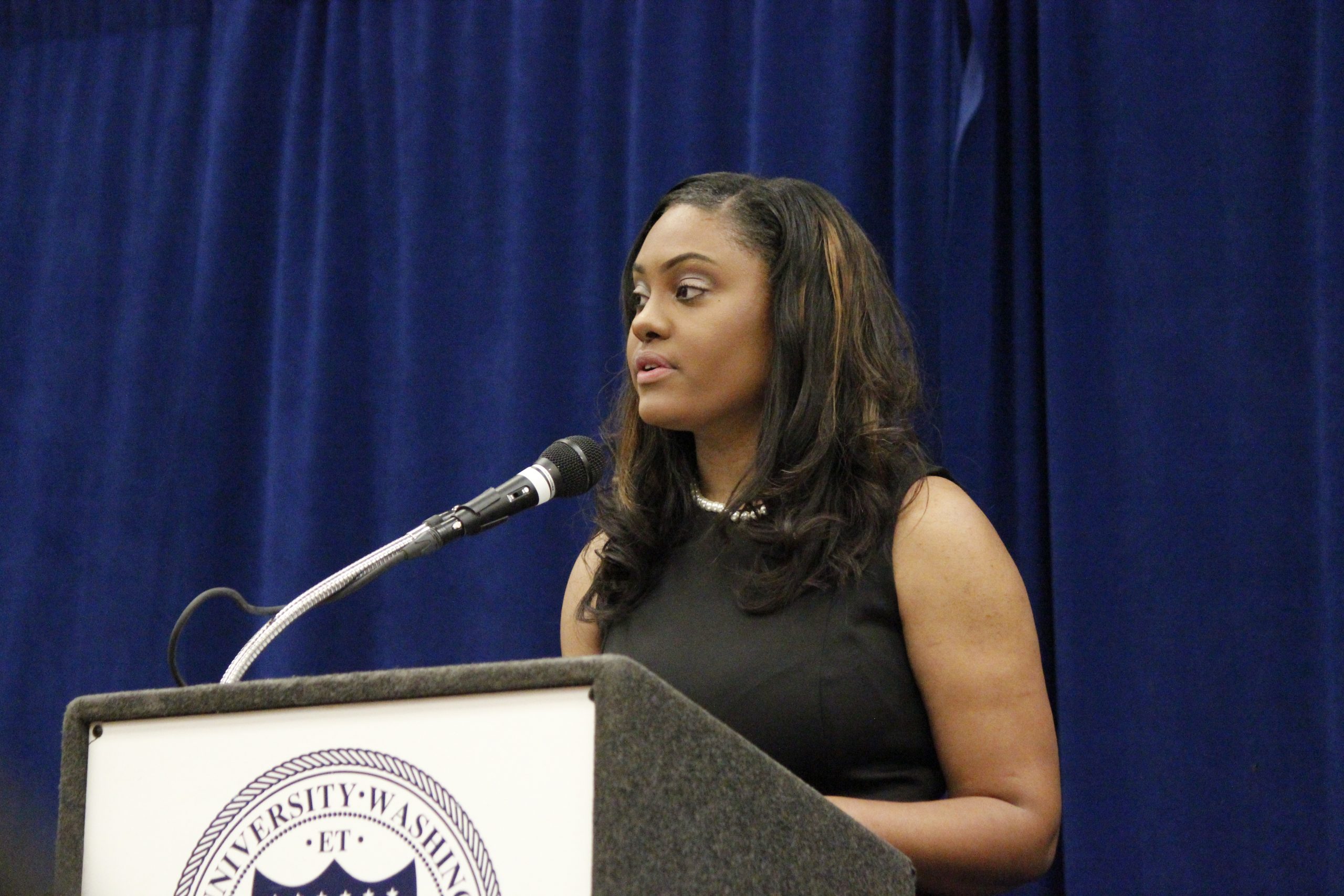 In a concise State of the University address in Blackburn Ballroom Wednesday evening, Jan. 18, Howard University Student Association (HUSA) Executive President Allyson Carpenter acknowledged the successes and failures of the 56th Administration of HUSA, and gave an assurance that it will continue its legacy of student advocacy throughout its final months.

With the Howard University’s upcoming sesquicentennial, all eyes are on the 56th HUSA administration in the remainder of their administration. Carpenter assured students and faculty that “through this, the collective work of our community, we will sail through the next 150 years.”

Throughout her address, Carpenter solidified the HUSA56 administration as one that is truly for the people, pledging to improve the quality of the student experience, declaring the university a “sanctuary campus” and making the promise that if students are willing to stand for justice, HUSA will be standing behind them.

The recurring themes of the night were student advocacy and fulfilling the promises of overall student satisfaction. Carpenter was adamant about keeping the promises her administration made to the students. So far, HUSA56 has streamlined the move-in process, making sure students received their move-in assignments and roommates ahead of time and revised the university visitation policy with the implementation of a new 24-hour visitation policy for upperclassmen.

On the promises of transparency and accountability of the student government, Carpenter’s administration passed a bill making sure that all paid officials must be confirmed by the Senate. The Senate passed its first bill, called the Freedom of Information Act (FOIA), that allows students access to information on HUSA’s budget, salaries, meetings and anything that happens behind closed doors. She expressed that it is vital for not only concerned students, but student media, which she promised “reasserts [her] commitment to supporting student media and asserts commitment that they’re respected on every corner of this campus.”

This year, HUSA has made sure to holistically improve the student experience. Along with practical resolutions like FOIA, the administration has passed the Affirmative Consent Resolution, which “urges the university to take a more mobile stance on defining sexual assault on our campus.” HUSA’s Health and Wellness Committee has hosted a domestic violence focus group, tested every blue light on campus and coordinated with the Red Cross to host their largest blood drive.

As part of its political agenda, HUSA made the promise to provide students with the necessary means to vote and request absentee ballots, which it accomplished through its TurboVote initiative, allowing over 1,300 students to vote for the first time.

Although she has not yet fulfilled all of her promises, Carpenter assures that she is on the right path to doing the best accomplish what she can in the remainder of her term. During their campaign, HUSA promised the installment of wireless printers in each dorm. This has not yet been completed, but the first printers have been installed in four buildings and Carpenter says that they are “on track” to achieving this goal. HUSA has also launched a pilot program in which grant money is provided for students with unpaid internships in the College of Arts and Sciences, modeled after a program at George Washington University.

Among the goals HUSA is still pushing for to improve the student life experience are things such as “free laundry, better workout spaces and hot water in the Quad,” according to Carpenter. An “ambitious” goal that HUSA has not been able to accomplish is rewriting the HUSA Constitution.

However, Carpenter had little information on perhaps the most anticipated program, the Student SmartTrip Cards Initiative promised by last year’s HUSA55 administration. While she could not offer much information, she revealed the formation of a new Transportation Advisory Committee that is currently working on a program for free or low-cost bikes to students. In addition, this committee is working to improve shuttle routes and partnering with ride-sharing apps to reduce prices for Howard students.

While in office, Carpenter has noticed other problems the university has, including the failure to adequately represent the interests of graduate students. For this, she has committed to the establishment of a Graduate Student Association.

“Being a great leader means doing what’s best for the people you represent, even if that means allowing them to represent themselves,” said Carpenter.

Along with the underrepresented, Carpenter advocated for the international community, calling for more student work opportunities because of the limitations placed on their ability to work by “unfair” visa laws. She also urged the office of Residence Life to extend the work for housing program to international students.

Finally, Carpenter assured students that the “righteous, rebellious” spirit of Howard is still here and that HUSA will continue to advocate for the student body.

“It’s about protecting our future,” said Carpenter. “Even in times of financial hardships, we should never compromise our values. We cannot cower to those in position of influence; we should speak truth to power even when our backs are up against the wall.

“We will continue to fight for a better relationship with the administration, a relationship defined by mutual respect and real collaboration. Student leaders deserve more than a seat at the table, we deserve a voice,” she said. “We want the administration to respect our self-determination and our right to how we lead ourselves and how we represent ourselves. To diminish that right is to adulterate the function of a representative democracy.”