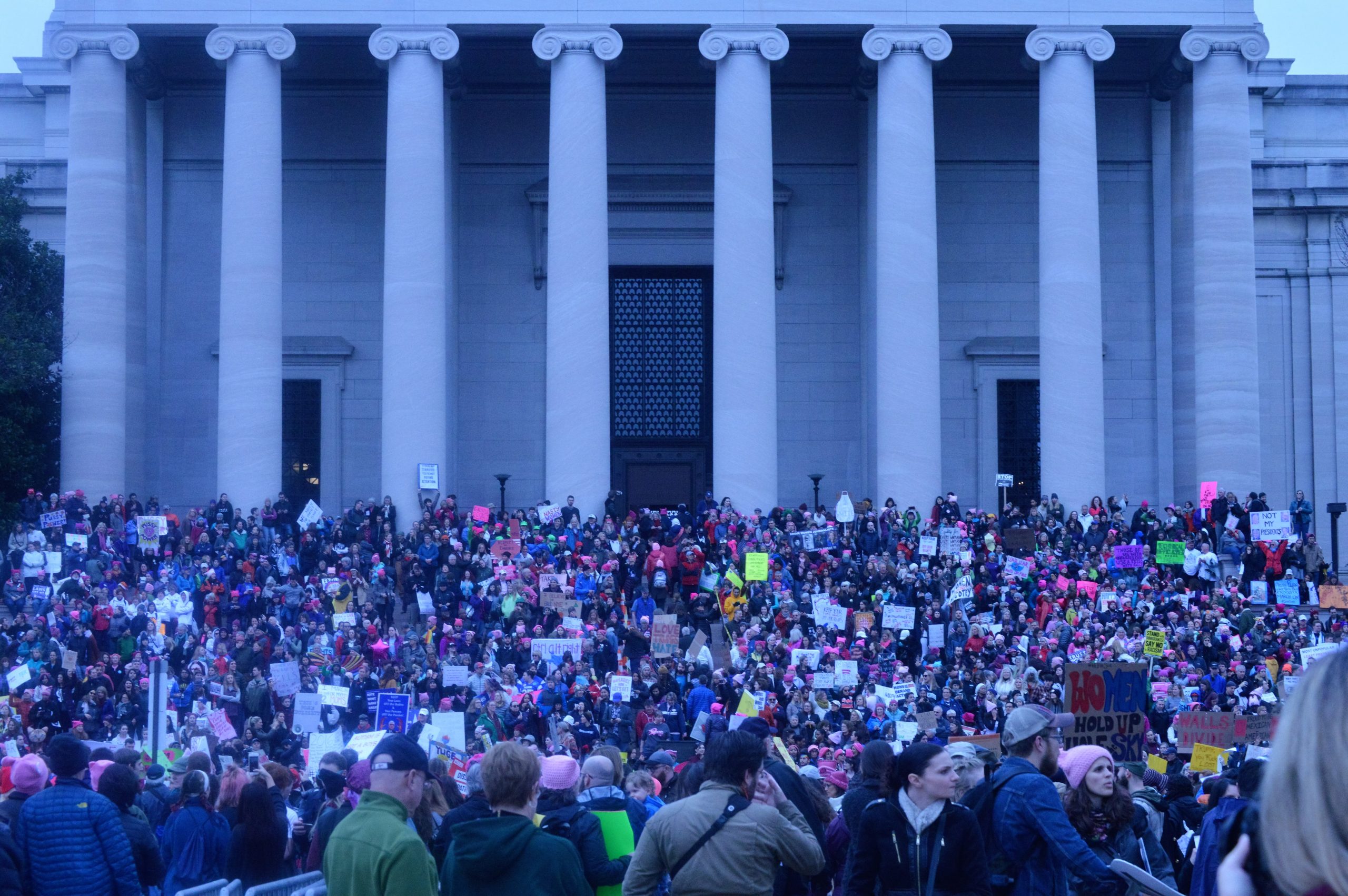 Approximately 500,000 people participated in the Women’s March on Washington to protest against President Donald Trump on Sat., Jan. 21, just one day after Trump’s inauguration with many traveling from across the country.

In addition to the march in D.C., many other sister marches took place in other cities such as Chicago, Los Angeles, Miami, Charlotte and New York.

The Women’s March on Washington featured an impressive list of speakers, including Angela Davis, Ilyasah Shabazz, Malcolm X’s daughter, Van Jones, Melissa Harris-Perry, Michael Moore, Mothers Of The Movement, Howard University alumna and Sen. Kamala Harris (D-CA) and many more, all of whom focused on the importance of inclusion, diversity, and equality. Live music also rocked the crowds with performances by Janelle Monae, Maxwell, Angelique Kidjo and many others.

Many of the women in attendance wore pink hats with cat ears, alluding to the predatory statements made by Trump about grabbing a woman by her genitals. To take the imagery further, some women wore vagina costumes, including Jane Meskil, 55, from Portland, Oregon.

“President Donald Trump must understand that as women, we have our rights and needs,” Meskil said. “My voice will be heard, even if that means getting on a plane and coming to the District.”

Among the hundreds of thousands of women was D.C.-native Carol Edwards, 49, a breast cancer survivor who felt a special connection to the topic of women’s health because without access to proper health care, she would not have gotten her initial breast cancer screening, where she was diagnosed with stage three triple-negative breast cancer, a serious health journey that included chemotherapy, a bilateral mastectomy and two other intense surgeries.

“I preach to my daughter’s about fighting for what they believe in,” Edwards said, dedicating her journey to strength, affordable health care, and her family’s support. “Now, it’s time for me to show them; they are young ladies and these issues and concerns include them.”

Despite being too young to vote, Paige Harris, 17, from Laurel, Maryland, wanted to make sure her voice was heard during the march.

“In school, teachers don’t tell us everything,” Harris said. “They think we don’t care or are uninterested, but when someone like President Donald Trump is put into a position with this level of power it is scary — I couldn’t vote but I still want to make a difference.”

Patty Noe, 51, an evidence custodian at a police department from Indian Harbour Beach, Fla. traveled to the march to show solidarity amongst other women.

“I’m here because we need to show the president that we are serious about disrupting his agenda, and resisting changes that strip rights away from immigrants, from women, that strips funding from education, that funds illegal wars, and to resist changes in laws that will erode our environment and our civil rights,” Noe said.

Despite most of the attendees being women, a considerable amount of men were present to show support for women’s rights and to be in solidarity with the women in their lives.

“There is nothing I wouldn’t do for my mom, my sister, nieces or girlfriend,” said Marcus Ferguson, 22, of Greenbelt, Maryland. “Their rights are so important to me.”

University of Pittsburgh student Arie Dahlager, 21, came to the march with his roommate to show resistance to the new president and his administration.

“I thought it’d be good to be a good ally and show up to support all the women that are going,” said Dahlager from St. Paul, Minn. “My roommate is from this area, and I figured it would be fun to come down here and support everything that’s going on.”

As if half a million people in the nation’s capital united to support the progression of values was not impressive enough, possibly more than the amount of people at the inauguration, hundreds of “sister marches” took place in every major city across the country as well as some around the world, with an estimated 5 million total participants.