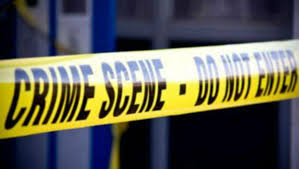 Officers arrived at the scene after reports of a domestic dispute between the man and his girlfriend, Chante Hill. According to the MPD, Hall stabbed Hill minutes before their arrival.

Once officers had arrived at the scene, Hall had the knife in-hand and refused to drop it, according to a police report. Four shots later, Hall was on the ground, unconscious and bleeding from the chest.

In the video, officers can be seen standing on the porch while Hall and Hill walk toward the door from inside the house, shouting at Hall to drop the knife. As the situation escalates, Hill repeatedly yells “he’s alright” and begins to sit down, positioning herself in between the police and her boyfriend. The officers instruct her to get up, and another woman can be heard saying “please don’t shoot his crazy ass.” After Hill gets up, officers fire four shots at Hall. Although he did have a knife, he did not appear to charge at the officers at any point. Hill was transported to MedStar Washington Hospital Center where he was later pronounced dead.

“Far too many people of color across the country are victims of excessive use of force by law enforcement,” said Monica Hopkins-Maxwell, executive director of the American Civil Liberties Union of D.C. “We were once again reminded this Christmas that the residents of the nation’s capital are not immune to that reality.”

In December 30, 2016, family and friends gathered to remember Hall on what would have been his 30th birthday, desperate to know why police did not do more to deescalate the situation.

“Whether he had a knife or not, I don’t think they had to shoot him,” Mack McCain, Hall’s uncle, said to NBC Washington. “They could have tased him, anything. He’s not a bad guy. He takes care of four kids, [he was] a navy veteran. He didn’t deserve it.”

His mother, Angela McCain, wants to know why lethal force was necessary if the officer “wasn’t even close enough to say his life was in jeopardy.”

The U.S. Attorney’s Office for the District of Columbia is currently conducting an investigation into Hall’s death.