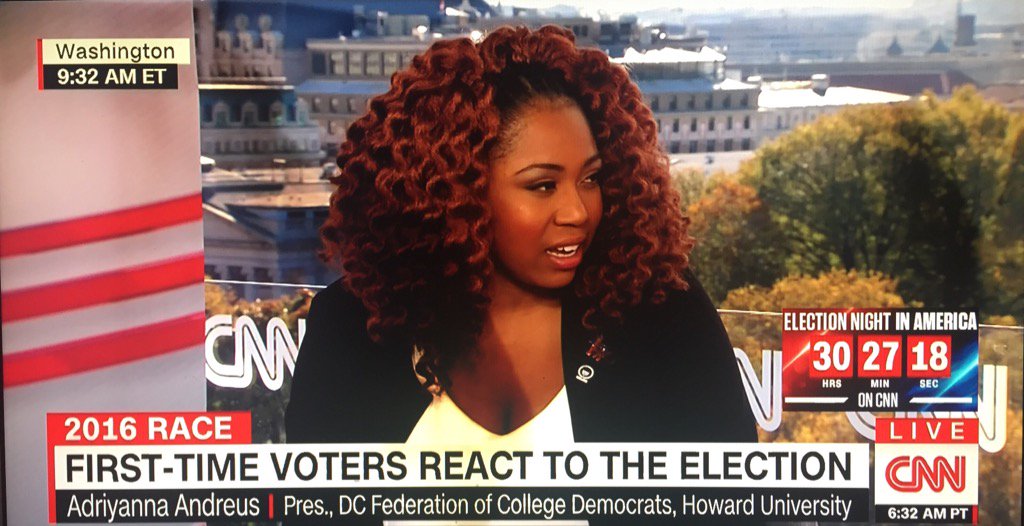 Adriyanna Andreus, a political science senior from Rockaway, New Jersey, brought extreme pride to the Howard University community when she appeared on CNN to discuss the 2016 presidential election on Monday, November 7. Andreus currently serves as president of the D.C. College Democrats and was featured to discuss the experiences she encountered while holding the position as well as her reaction to the election with being a first-time voter. The Hilltop spoke with Adriyanna about her position and journey leading up to Election Day:

HT: Tell us about your process of becoming president of the D.C. College Democrats.

AA: “My friends and I re-chartered Howard University College Democrats [during] our sophomore year. By junior year, I decided to run for president of Howard Democrats and got it. I then ran for political director for the D.C. Federation of College Democrats and was in charge of the caucuses which worked on policy issues, legislative issues, etc. After learning there were only two black women out of the entire national organization, I decided to run. With the help of the national president, I got elected.”

HT: What does your job as president of D.C. College Democrats include?

AA: “My job is to organize and gear up D.C. college democrats, whether that’s at Howard, American, George Washington…basically all of the schools in Washington, D.C. who have a College Democrats chapter, as well as working hand and hand with DNC (Democratic National Convention). What I do is empower my members to do what they want and how they want to do it, especially when it comes to civic engagement and protesting. With the past election, we did a lot of canvassing, voter registration, and discussions, but our main focus is now making sure we’re still part of the discussion as millennials.”

HT: What was one of your most eye-opening experiences while holding this position?

AA: “I’ve noticed a lot of the other schools look at Howard as not on the same level [as other D.C. universities]. This has been very hard because you have to prove yourself. I’m already a Black woman, so that’s a battle on its own, but when you say you’re from Howard University it’s like, “Oh, we don’t take her seriously.”

HT: Were there any obstacles you’ve had to overcome during your presidency?

AA: “What I have dealt with is kind of a complaining fact of too many of our events are Black people-focused. Before, I thought that I should probably listen to them, but I’ve also came to realize that I am a Black woman dealing with Black issues. This is probably the only time where there’s going to be focus on Black issues, so I’m going to be that person.”

AA: “I was on the panel with two other men, both republicans. Their conversation was basically how democrats, especially millennials, don’t know what they are talking about, and that they’re messing up this country. They started talking about their policies and felt like it sounded like nationalism and white supremacy; it was the craziest thing in the world. It took a lot out of me not to say anything to them right then and there…and it was very troubling how they were thinking. You could tell the past eight years has taken their whiteness away and they felt disempowered. Instead of realizing the privilege they had and wanting to work towards the better solution, they just wanted it back. I made a comment about traditions in the panel and how that wasn’t the best way to go, and one of them told me they had a problem with what I said after the panel. The man wanted to have a conversation about it, but I told him I had already said everything I had to and thanked him for his time. The whole situation was crazy.”

HT: What is your favorite part about what you do?

AA: “I really like being able to have a platform to bring up issues that aren’t normally considered. Also, bringing attention to topics that people normally don’t care about or consider. I always tell people I will be that Black woman in the room who forces you to at least consider, talk about, or value Black people and their opinions. That’s been the best part.”

HT: Are there any lessons you’ve learned from holding this position?

AA: “Yes and no. I’ve been forced to pay attention to others issues, and sometimes just making sure my issues don’t get erased, so finding a balance and making sure they’re getting validated, but I’m getting validated as well. Also, I learned that everyone isn’t going to care about the same things you do, they’re not going to join the fight with you 9 times out of 10, and that’s okay.”