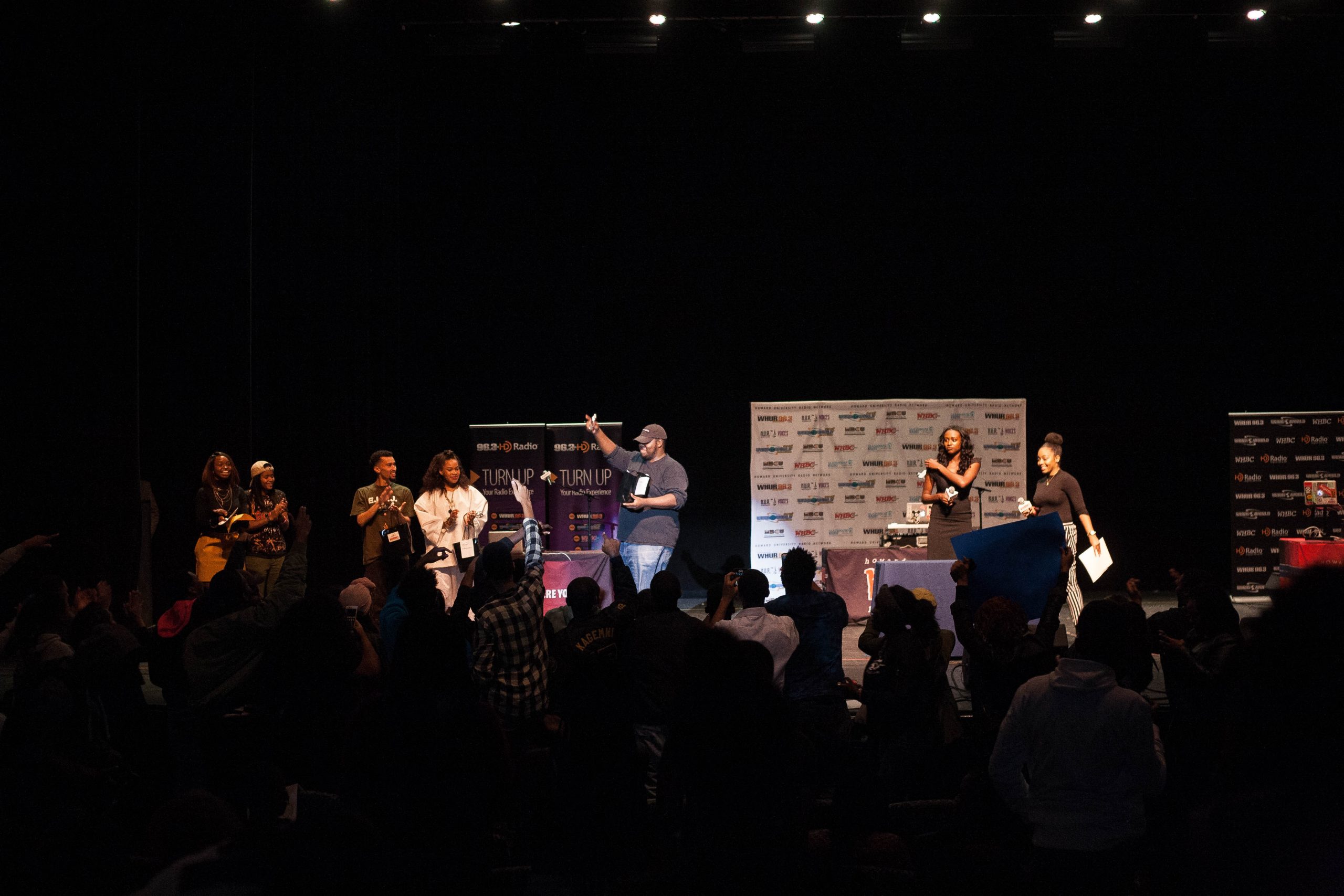 On Thursday, Nov. 10, Howard University’s student radio station WHBC 96.3 HD3 held it’s annual Howard’s Hottest in Cramton Auditorium. This year showcased Howard’s Hottest: All-Star Edition and the event was an opportunity for Bison to showcase their musical talent, as well as a chance to claim the title of one of Howard’s Hottest performers.

After auditions in October, the contestants were determined to be ELPJ, Zaynabi, Lukas G and Prestige in the rap category; MerlexSkate, Eli and RSH On The Beat in the producer category; and DJ A1, DJ Atrix and DJ Jetson in the DJ category. The competition was judged by Howard alumni DJ Premonition and DJ Chubb E Swagg; and music executive Luka Clark. Miashia Nicole and D. Knox of WHBC’s Good Morning HU hosted.

Last year’s winner, ELPJ, kicked off the show with rhymes that held a social justice message and had the crowd chanting ‘Black lives matter.’ The judges praised ELPJ for his flow, but cautioned him to watch his breath control while performing. The next rapper to take the stage was Zaynabi, who judges urged to never rap over vocals. Lukas G, half of the New Kingz rap duo, was third to take the stage. He received support from Chicago natives in the crowd, but the judges told him to work on breath control. The last rapper of the night was Prestige who brought along backup dancers for his performance. The judges said they felt that while Prestige put on a show, he relied too heavily on gimmicks.

The rap performances were followed by a surprise appearance by singer-songwriter Sevyn Streeter who offered advice for the rappers in competition.

“Whenever you’re performing, give it your all,” she said.

Streeter went on to promote her new single, “Prolly” featuring rap artist Gucci Mane, as well as her upcoming album, “Girl Disrupted.” Streeter ended by telling the audience that she loves coming to Howard and its energy that it holds.

The show continued with the producer contest. The first producer to share his work was last year’s Howard’s Hottest winner, MerlexSkate. The crowd was inspired to make up rhymes to go along with his beats, which the judges said was a great sign. Next up was Eli, who the judges praised for the order in which he chose to present his work and encouraged to keep working. The final producer was RSH On The Beat who brought a groovebox on stage for a live performance. The crowd loved her performance, but the judges cautioned they would not give extra credit for making her beats live.

The final and most anticipated segment was the DJ contest. DJ A1’s selection kept the crowd dancing his entire performance and the judges complimented him for using his knowledge of popular music to his advantage. He was followed by DJ Atrix who judges praised for having an eclectic combination of songs. The final performer for the night was DJ Jetson who kept the audience dancing and was complimented for connecting with the crowd by judges.

At the end of the show the winners were announced to be ELPJ, RSH On The Beat and DJ Jetson, and the audience gave a standing ovation.

Freshman finance major Wayne Williams, said, “This was my first time at Howard’s Hottest, but I will definitely be coming back.”

Senior television and film major Kelah Cash, who has attended Howard’s Hottest all four years while attending Howard, said, “I really enjoyed the show and all of the performers who I got to see.”

Based on the energy in Cramton that night, Howard’s Hottest was, without a doubt, one of the hottest events on campus this semester.