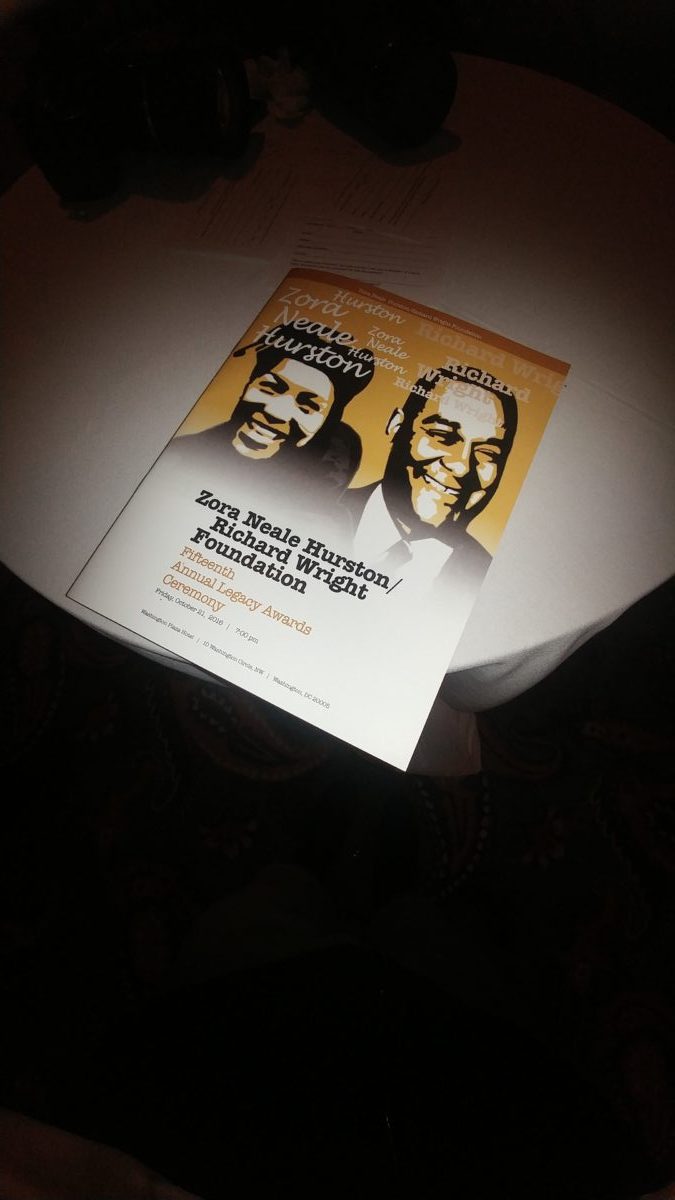 The Hurston/Wright Foundation, an organization that seeks to discover and honor writers dedicated to the development of Black literature, hosted its 15th annual Legacy Awards on Friday, October 21, at the Washington Plaza Hotel.

The Hurston/Wright Foundation was founded in 1990 by award-winning author Marita Golden and bibliophile/cultural historian Clyde McElvene. The organization is named after literary masters Zora Neale Hurston and Richard Wright, in order to illuminate its platform on preserving the legacy and work of future Black writers and the literature they produce.

“If we don’t celebrate ourselves and our accomplishments no one will,” said Junot Diaz, acclaimed author, recipient of the MacArthur “Genius Grant.” Diaz received the Ella Baker Award for recognizing writers and art activists for exceptional work that advances social justice.

The night was standard award ceremony fare. The events started off with our mistress of ceremonies Michel Martin saying a few words on the night and its significance. Some particularly prominent artists were honored with the North Star award and the Ella Baker award, and finally all the awards for the different genres were distributed.

“It may be an honor to be granted this award for my work, but it is a greater honor that this award was given in the name of Zora Neale Hurston and Richard Wright, two of the greatest African-American writers in this country,” said Gaines upon receiving the award.

The awards ceremony also honored student writers who contributed toward the legacy of Black literature with the award for college writers in fiction and poetry.

“Winning this award means a lot. I am mostly in a classroom with no people of color and I feel like I have to do a lot of translating. It is fortunate to me to be honored by people ‘looking through the Black gate,’ because when I have already written a story and I can tell them to enjoy it as it is,” Wilson said.

“If we look at the number of Hollywood films that are produced by Black people that star black people and the fact that most of white America will not go to see those films, what the mass of people will consume is more sports and not literature, I think this night takes on more and more importance,” said Haynes Davis, a poet attending the events of the night and a supporter of the arts.

As it is important to recognize the accomplishments of Black artists when they are hardly noticed by the public at large, the Hurston Wright Legacy Awards was an amazing celebration for many Black literature writers who are still daring to represent the culture.

During the close of the ceremony many of the award recipients joked and shared stories of their success and how they came to be where they are, and they were honored to have their accomplishments showcased. Junot Diaz paying tribute to those who came before and inspired him and The Legacy Award for Fiction writer James Hanahan delivering a touching tribute to his mother.

The Hurston Wright Legacy awards highlighted the renowned esteem that Black literature has for many people of color, and the recipients were honored to receive an award named after writers who embodied black excellence.

“We have to support the arts. We have to keep supporting them as much as possible in order for them to flourish,” said Mr. Robert Richardson, a supporter of the Hurston/Wright Foundation.